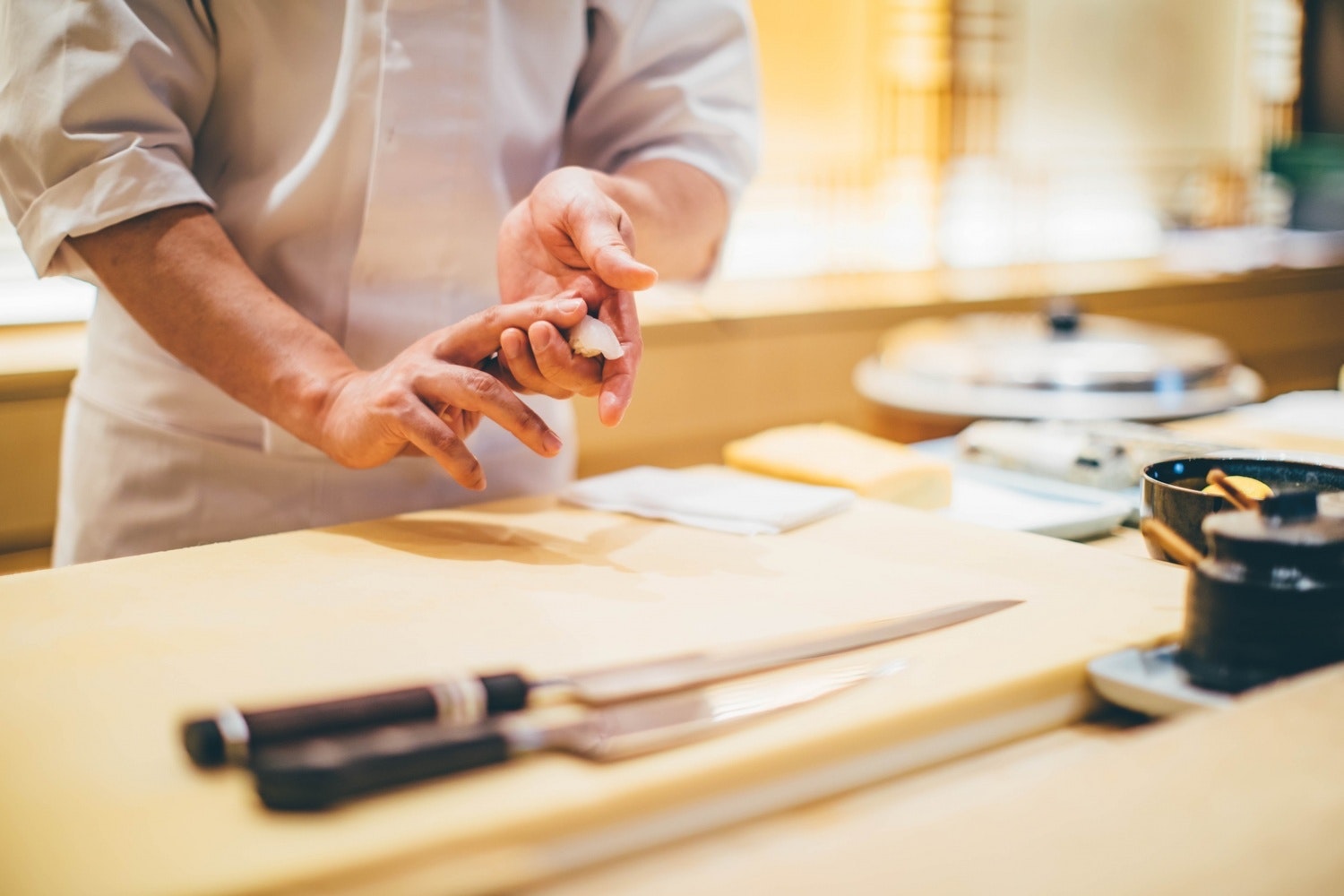 The culture of Japanese food is now popular all over the world, with things like sushi and kaiseki cuisine.

In fact "Washoku" has been registered as a UNESCO Intangible Cultural Heritage.
Now, this food culture is spreading worldwide.

In the business world, having lunch meetings over healthy Japanese food has become a common practice.
In this video, we'll introduce a sushi chef from "Sushi Ginza Onodera New York" while exploring the essence of Japanese cuisine.
After watching this video, you'll understand why Japanese cuisine is loved all over the world.

Sushi - The Representative of Japanese Cuisine

Sushi is a traditional Japanese food that combines vinegar rice with seafood.
It has a long history, and was first created around 4th century BC by the people of Southeast Asia.
The people of that time preserved fish using fermented rice, leading to the first rendition of sushi.

In Japan, there are many popular sushi restaurants in areas where fresh fish is easily available.
These areas include Hokkaido, Tsukiji and Ginza in Tokyo, Toyama Prefecture, Kanazawa in Ishikawa Prefecture, Fukuoka City, and more.

Upon hearing the word "sushi," many people think of long-established luxury sushi restaurants, and start worrying about their wallet.
However, there are actually many conveyor belt sushi restaurants, which are popular for their cheap prices.
Popular sushi ingredients include medium fatty tuna, salmon, onion and tuna, salmon roe, sea urchin, and seasonal fish. What's your favorite sushi ingredient?

Do note that there is a unique etiquette when it comes to eating sushi, as well as specialized terms with rice being called "shari" (シャリ), and ginger called "gari" (ガリ).

This video introduces chef Masaki Saito of "Sushi Ginza Onodera New York."
He talks about the essence of sushi which he tries to bring across in his restaurant.

Saito was born in Hokkaido, and has been familiar with seafood since he was a child.
You might even say that it was predestined that he become a sushi chef.
That might sound like an exaggeration, but if you watch the video you'll probably think so too!

Many people in Japan think that sushi is merely a combination of vinegar rice and slices of raw fish. However, in actuality, the original edomae sushi required a lot of effort to marinate kombu (kelp), pickle side dishes, and roast ingredients.
What's more is, it takes a lot of skill and effort not to spoil the raw flavor of the ingredients.
This is the essence of the craftsmanship that can only be found in Japanese cuisine.

From 1:29 in the video, Saito states that "salting and dehydration keeps the ingredients fresh," and from 3:36, he adds that marinating the kombu brings out the unique umami and aroma of the Hokkaido kombu used, adding flavor.

From 1:44 in the video, he introduces the preparation process for Aori ika (bigfin reef squid).
The squid is first cleanly sliced with a knife.
He explains that, If you use too much heat, the ingredients will become cooked, but what you want is to preserve the freshness.
At the same time, heat is needed to sterilize the ingredients. That's why careful heat management is crucial.

Next, from 2:54 in the video, he states that the use of vinegar depends on the type of fish, and fish can also be cured using soy sauce or soup stock.
In the world of sushi, "simmering" does not mean boiling ingredients in soup and then keeping it cooking for a long time, but rather, letting it pass through hot soup stock for a short time.
There are a few aging techniques for maintaining the fresh flavor of the ingredients.
These techniques include "fermenting" (漬け, zuke) in vinegar or soy sauce, lightly "broiling" (炙る, aburu) the surface of the ingredients, and "finishing" (〆る, shimeru) with salt or vinegar.

According to Saito, aging is not part of the cooking process.
Cooking is a technique where heat is spread evenly throughout the ingredients, with condiments added for flavor.
This way, the protein that the animal had when it was alive is weakened.

However, "aging," which was discovered in Japan in the latter half of the 1800's, is a technique for maintaining the raw state of the ingredients for as long as possible.
Thus, the diminishing of protein is minimized, and the texture and flavor of the raw ingredients is not affected."
Therefore, you could also say that if the ingredients are not fresh, they are not suitable for aging.
This can be seen from 0:27 in the video.

The aging techniques are so familiar to us in Japan that they practically go unnoticed by anyone not aiming to become a sushi chef or other kind of chef.
In fact, it might only be when you see Japanese cuisine from an outside perspective that you realize just how advanced these techniques can be.

The Essence of Japanese Food in New York, Where Cultures from Around the World Intersect

Even in the United States, which has the world's largest economy, New York is an especially large city where cuisine and cultures from all over the world co-exist and intermingle.
If you go sightseeing in New York, you can enjoy all-you-can-eat sushi in a casual setting, or even order delivery.
As the land where pizza delivery was born, food delivery is a popular service in the United States.
Additionally, through food reviews on the internet, you can see the deep knowledge that New Yorkers have about Japanese cuisine.

Outside of Japan sushi is evolving, with new recipes, such as rolled sushi and California rolls.
Nowadays, sushi chefs who have graduated from sushi academies are active all over the world, but New York in particular has a thriving market.

Japanese cuisine in New York is a mixture of gems and stones, but "Sushi Ginza Onodera New York" is truly a gem where you taste traditional Japanese sushi made using genuine techniques.

Summary of the Sushi Chef of Sushi Ginza Onodera

If you happen to visit New York, definitely stop by "Sushi Ginza Onodera New York" to experience the essence of Japanese cuisine.
Comparing sushi from outside of Japan to the sushi you can find within Japan is a great way to experience how different cultures intermingle to create new flavors!

Today, Japanese cuisine is loved all over the world, to the point that you can enjoy genuine Japanese food even in New York.
For Japanese people, eating some familiar Japanese food can even help with eliminating jet lag lol.

If you still haven't yet, be sure to check out the video to see the amazing techniques used by the sushi chef at Sushi Ginza Onodera New York!