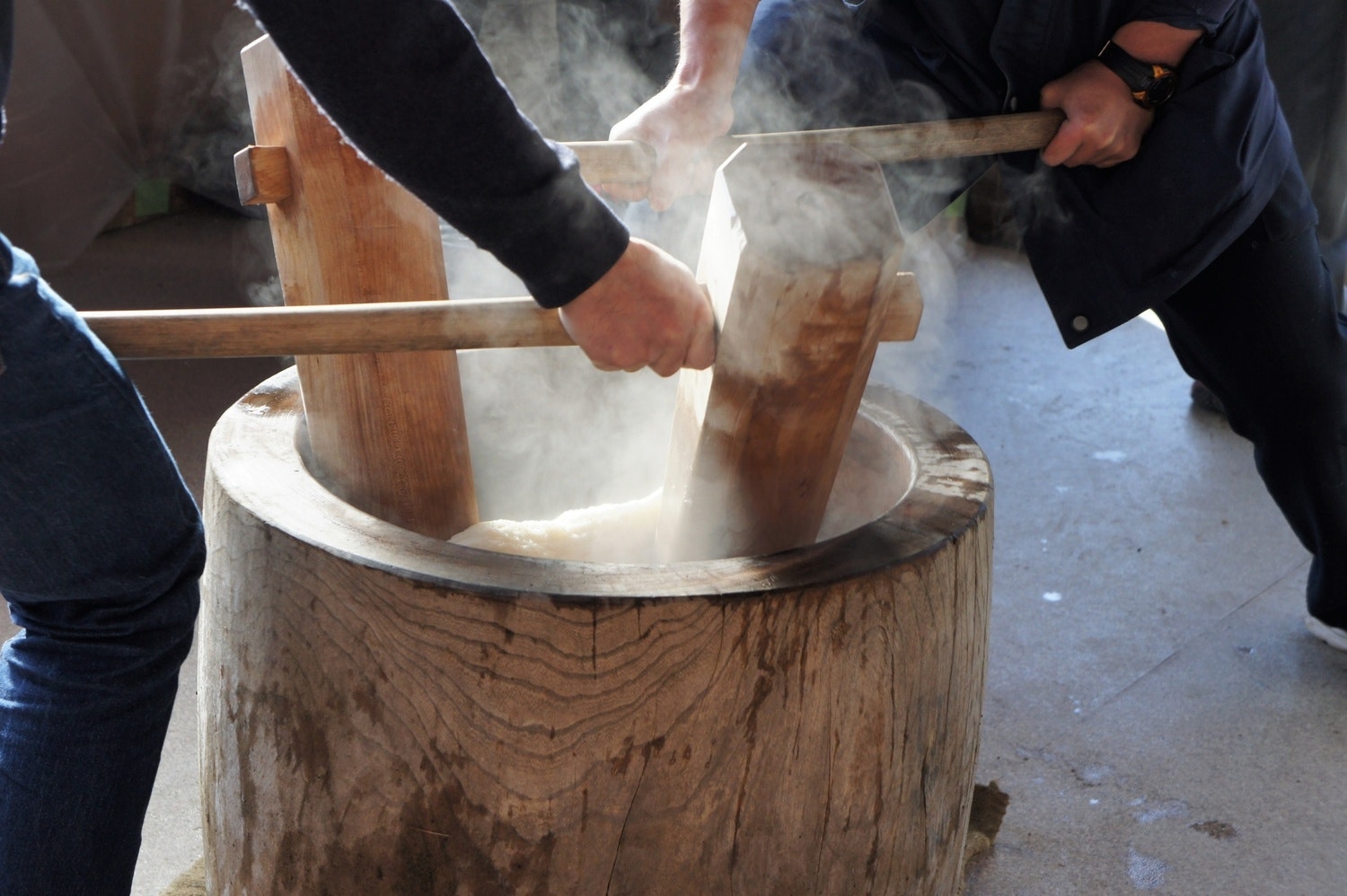 The Whole World Is Watching! The Amazing Technique of ‘High-Speed Mochi Pounding’!

Japanese food culture, ‘Washoku’ was registered as an Intangible Cultural Heritage by UNESCO and is currently gaining attention worldwide.

Recently, Japan has been welcoming a lot of foreign tourists whose main purpose is enjoying Japanese food culture.

Mochi rice cakes are one of the most popular foods among the attractive Washoku.
To make a delicious rice cake, it is not only important to pay attention to the ingredients, but also to the way it is prepared. Mochi Pounding is essential to creating great tasting rice cakes.
‘Mochi-tsuki,’ is a tradition of using a large mortar and pestle (in this case a mallet) to make mochi on New Year's day.

Have you ever seen high-speed mochi pounding? It's performed at Nakatani-dou, a Japanese confectioner, in Nara prefecture. Two or three confectioners pound mochi rice cakes using a mortar and mallet together at extremely high speeds, exchanging shouts to encourage one another.

‘Mochi-pounding at high speed’ is not only a performance for onlookers, but it is also an ideal method to make tasty mochi.
You'll be baffled at the speed and accuracy of these mochi makers!

Mochi-tsuki requires both a kaeshite, (mochi turner) and a tsukite, (mochi-pounder). It also requires a high level of skill to pound the rice evenly in the mortar, and the skill to control the moisture content of the rice by matching the movements of the pounder.

When the temperature of steamed mochi-gome (a kind of rice suitable for mochi rice cake) becomes low, mochi may not have its ideal texture and easily falls apart and won't stretch well.

Quickly pounding the rice while it is hot enough to keep it soft and stretchy results in a tasty rice cake with a rich flavor.

‘Mochi-pounding at high speed’ has its origin in Kamikitayama-mura village, Yoshino-gun, Nara prefecture where the Nakatani family is from.
It is a traditional Japanese method that reflects the local history and culture.

The master mochi-pounder is particular about the tools he uses for mochi pounding.
The mortar, made by an artisan in Sakai city, is specially designed to be shallow so that the turner can easily turn mochi.
The kine pestle should be heavy enough to pound mochi with its own weight.

The master mochi-pounder of Nakatani-dou has various preferences for mochi-tsuki. They are shown in the video.

Only the Best Ingredients

Yomogi-mochi is one of the most popular confectioneries of Nakatani-dou.

The master mochi-pounder is very particular about the ingredients of Yomogi-mochi, as well as the mochi-pounding method.

They use Hiyoku-mochigome rice from Saga prefecture to make good mochi rice cakes and also use top quality azuki beans from Tokachi, Hokkaido, along with young Yomogi (mugwort) leaves from Uwajima, Ehime prefecture.

Yomogi-mochi is the result of a quest for excellence in cooking methods, ingredients, and taste.

Being shown on TV, ‘Mochi-pounding at high speed’ performed by the master mochi-pounder of Nakatani-dou attracted the national attention. And now, is gaining popularity from overseas as well, introduced by foreign media.

The high-speed rice cake pounding by the masters of Nakatido, who drew the attention of the whole country with their amazing feats of craftsmanship on TV, has recently been picked up by international media and is becoming increasingly popular.
Nakatido's high-speed mochitsuki chefs are not only popular in Japan, but also among people around the world.
Nakatido says in the video that he wants his customers to be happy when they see the high-speed mochi pounding and even more happy when they eat it. These are words of someone who truly loves, and is dedicated to their craft.

As a Japanese citizen, I am proud to see not only Japanese food, which is listed as an intangible cultural heritage by UNESCO, but also Japanese culture being admired by the world.