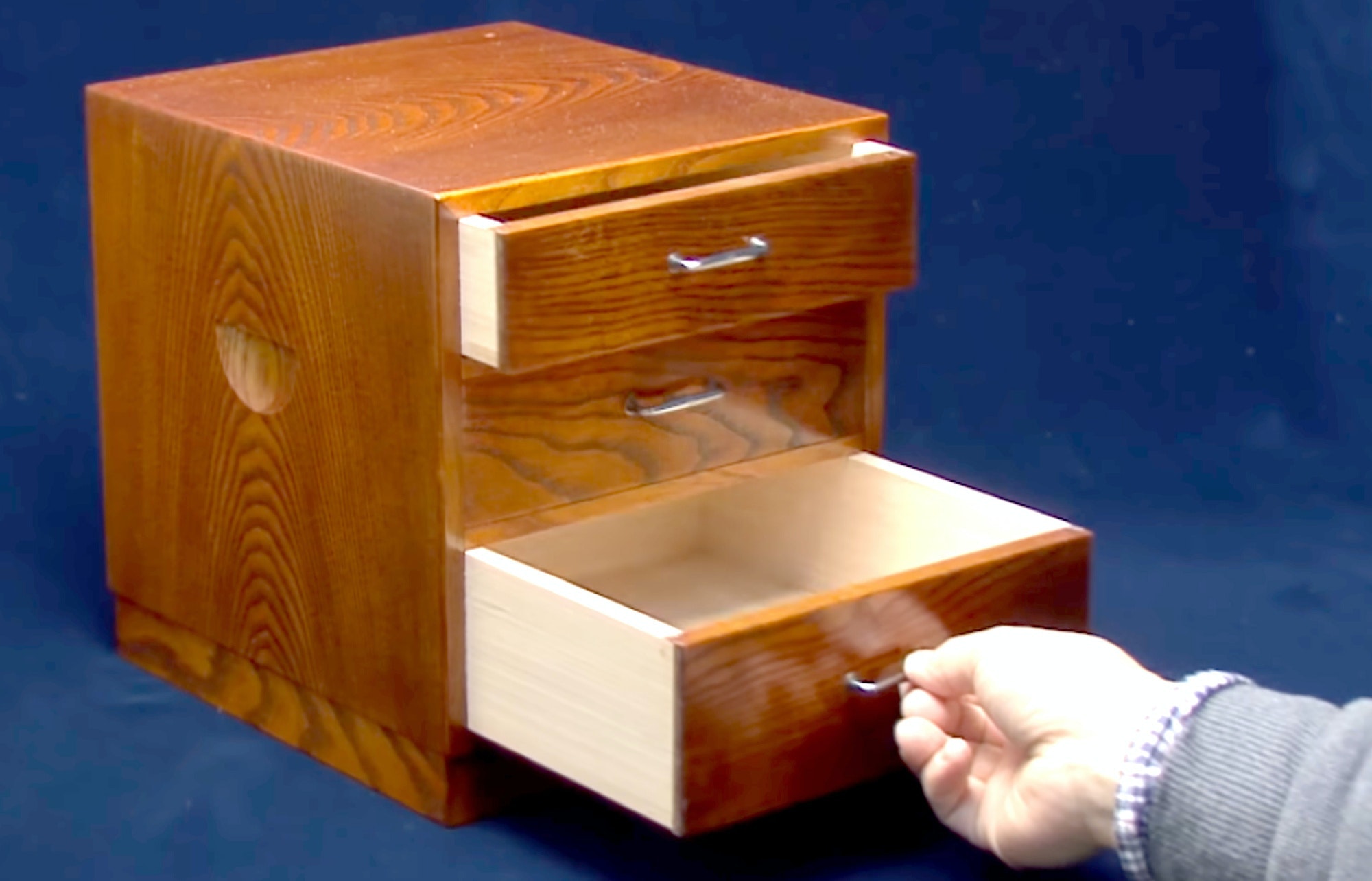 About the Edo Sashimono Introductory Video

In Japan, there is a traditional way of building, creating furniture, and woodworking without using a single nail.
This woodworking technique is called "sashimono" and has a long history dating back to the Heian Period (794-1185).
Professionals who build Japanese shrines are called Kudenshi (宮殿師, "Buddhist altar craftsmen") or Miyadaiku (宮大工, temple carpenters), and it is said that the methods for crafting Edo Sashimono were inherited from these craftsmen.
The origin of the name "sashimono" comes from fitting wood together (指, "sashi" means "put into").
You can see the female Edo Sashimono furniture craftsman "Motoko Kawauchi," who works at a workshop in Higashi-Nippori, Arakawa, Tokyo, in the video, carefully carving the mortice and tenon so that the dresser can be put together tightly.
One can see that when the boards are put together, they fit together in a very satisfying way, creating a sturdy dresser.
You can see a close look at the mortises at 1:02 in the video.

Unlike ordinary furniture craftsmen, Edo Sashimono, which is inherited from the advanced woodworking techniques of traditional Japanese craftsmen, the people who specialize in this are called "Sashimonoshi" (指物師).
The history of the sashimonoshi is long, and it is said that it was during the Muromachi Period (1336-1573) that the techniques began to be passed down for a profession.
The main crafts of Edo Sashimono consists of chests and shelves.

Since ancient times, sashimono were used by noble houses and aristocrats in Kyoto and in the Edo Period (1603-1868), when they became the purveyors to the Tokugawa Shogunate, many sashimono craftsmen were invited to Edo, and the furniture they made became so popular that it became indispensable to samurai life.
Many Edo sashimonoshi lived in the current Taito Ward, which was lined with daimyo residences.
From the remnants of those days, Edo Sashimono workshops are still concentrated around Tokyo's Taito Ward.

Characteristics of the Edo Sashimono, a Traditional Japanese Craft

The characteristic of Edo Sashimono is the texture of woodwork furniture that makes the best use of the beauty of the wood grain.
Also, because no nails are used, the appearance is clean and beautiful, and you can see from the video that the craftsmanship is utilized on all parts of the furniture.

Edo Sashimono carves mortises and tenons so that the wooden joints cannot be seen from the outside when putting them together, because of this, the less you can see them, the higher the level of craftsmanship.
Looking at the finished product of Edo Sashimono, you can see a glimpse of the simple and sturdy spirit of the craftsmen of the Edo Period.
As shown at the end of the video, when you press one drawer, a different drawer pops out; which is evidence that the inside of the chest is very airtight because the wooden joints fit tightly together.

The mortises are carved in such a way that if you put something in a drawer, the weight of it will prevent it from popping out.
Edo sashimono craftsmen have passed down the traditional Japanese techniques to the present, from the selection of mulberry, zelkova, and paulownia wood to methods for assembling different pieces.
You can see the beautiful completed wardrobe, like a work of art, from 3:03 in the video.