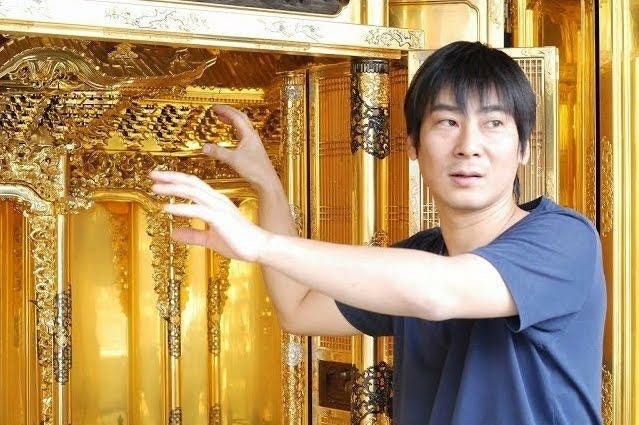 This video, titled "The Journey to Becoming a Buddhist Altar Lacquerer/ Kyoden Buddhist Altar Workshop" (仏壇塗師になる旅 / 京田仏壇店工房), was uploaded by "Nippon Teshigoto Zukan."
It introduces "Kyoden Butsudan-ten Koubo," a workshop that manufactures and sells traditional Takaoka Buddhist altars and restores gold foil.
From 0:30 in the video, you can see Mitsuhiro Kyoden, a Buddhist altar lacquerer or "nuri-shi" in Japanese.

This 5-minute video is perfect for people who want to learn about Buddhist altar lacquerers and the craftmanship behind them.

In this article, we'll go over his techniques and preferences along the video.

The History of Takaoka Butsudan and Buddhist Altar Lacquerers

Takaoka Butsudan has a long history dating back to the Edo period (1603-1868) in Takaoka, Toyama.
Takaoka Butsudan creates Buddhist altars that must be assembled and they use a large amount of gold leaf.

The lacquering techniques used for Buddhist altars was introduced from China along with Buddhism.
They're used for painting Buddhist statues, gluing arrowheads, and preventing rust on armor.

The video introduces the craftsmanship of Mitsuhiro Kyoden, a Buddhist altar lacquerer who paints both wood and lacquer, which are important processes in the production of Buddhist altars.

He explains the process from 2:18 in the video.
Lacquer is adjusted based on the weather forecast, and then checked on the next day to make further adjustments before applying the final coat.
This process is important in creating the best possible work.
It's important to keep adjusting the lacquer to the weather conditions each day.
If this process is not done properly, brush marks remain on the final product and the polishing process will take longer.

There is no textbook on how these processes are done, so the only way to learn is by trial and error and by learning from your mistakes.
Mitsuhiro learned the theory of lacquering at university, and when actually doing it, he thinks back on what his teacher taught him thinking things like "so that's what they meant," etc.
He passionately says that as a craftsman, he has to challenge himself and keep trying to improve.

In this video, you can see the spirit of craftmanship of a Takaoka Butsudan altar lacquerer.
A well-built Buddhist altar can be passed down for generations if properly maintained.