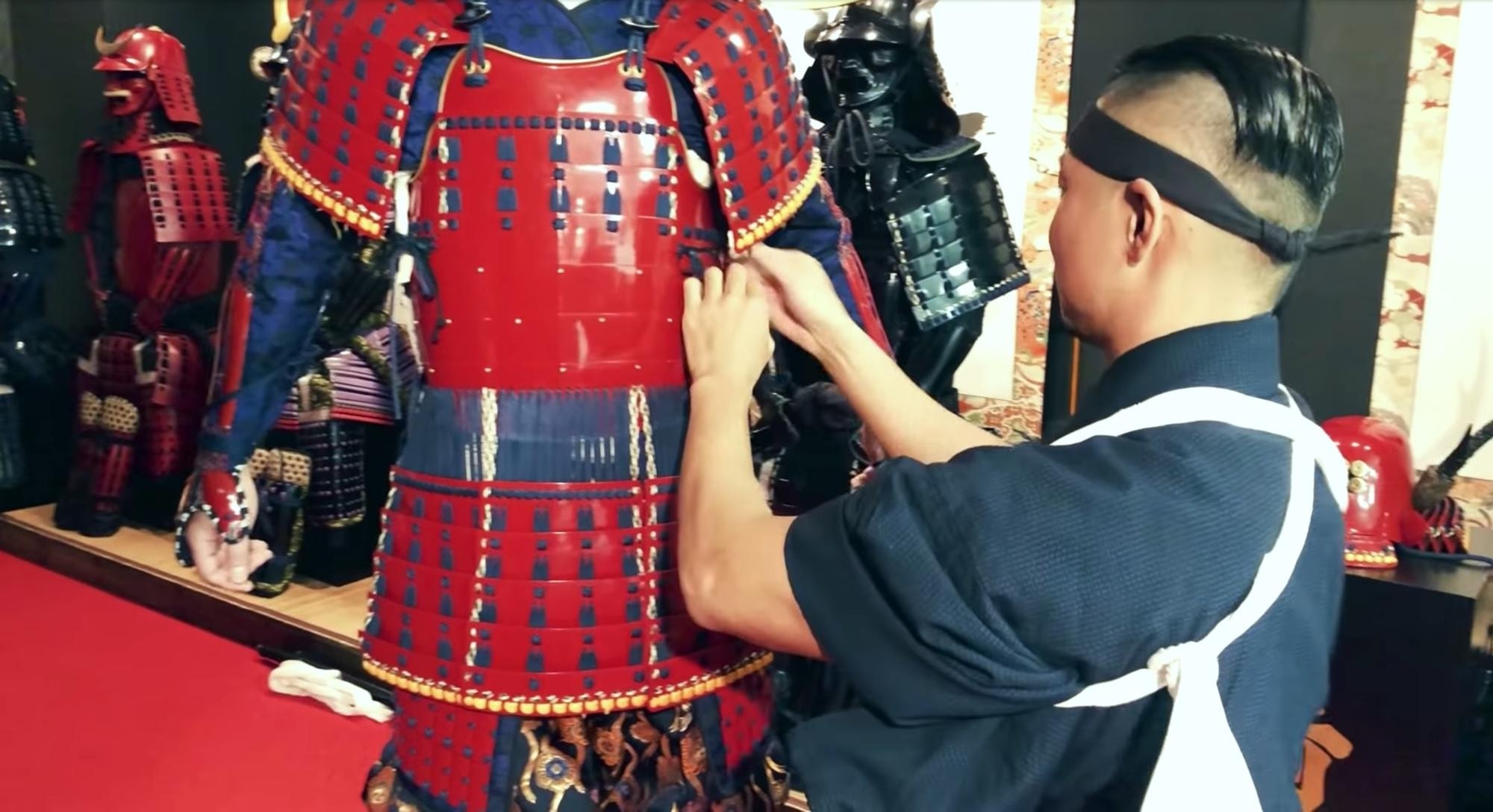 Samurai Armor of the Sengoku Period!

"How To Wear The Samurai Armor" is a video showing, you guessed it, how to wear samurai armor.
There are a lot of people interested in samurai armor from Japan's Warring States Period (1467-1615 AD).

The Armor of the Warring States Period

Armor refers to the equipment worn by samurai and military commanders of Japan's warring states period, and famous warlords of such as Oda Nobunaga and Toyotomi Hideyoshi.
Japanese armor was traditionally made by an armourer.

As shown at 4:46 in the video, the samurai carries a Japanese sword on an armored girdle, and on his back he carries equipment such as bows and arrows. Samurai wore this same armor in the warring states period while riding into battle on horseback. The unique characteristic of Japanese samurai armor is its rich color.
It's a unique and cool look quite different from the armor of ancient western knights.

As you can see in the video, armor from Japan's warring states period has several components.
After putting on the large iron plate-body, and tosei-gusoku, the warrior would then equip weapons such as spears, bows and arrows, and a swords.
It's quite complicated and putting it on alone is quite difficult.
At the Shibuya Samurai Armor Photo Studio, the staff will help you put the armor on, so don't worry about that.

As you can see in the video, the Shibuya Samurai Armor Photo Studio not only allows you to wear armor, but also gives you some trivia about armor, which is great fun for anyone interested in the samurai of the Warring States period.
In the video, you can see explanations about bows, Japanese swordsmanship, helmets, origins of the equipment, and more.

You can see the armor of the popular warlord Yukimura Sanada at 9:32 in the video. It's as if he's been resurrected in the present day!

How Can You Try on Samurai Armor From Japan's Sengoku Period?

You may want to buy life-sized Japanese armor, but the samurai costumes on sale are surprisingly expensive and heavy.
Some people enjoy making their own armor for cosplay.
If you're interested, be sure to browse the internet for it.

If you want to feel like a samurai without having to spend a ton of money, we recommend renting armor at the "Shibuya Samurai Armor Photo Studio" or "Sengoku Photo Studio SAMURAI" introduced in this video.

Shibuya Samurai Armor Photo Studio, introduced in the video, is a dream studio for those interested in Japanese history and samurai culture during the Warring States period.

In Japan, you can also experience ninja and samurai at the VR Ninja Dojo in Kanda, Edo Wonderland Nikko Edomura, the Samurai Museum in Shinjuku, and Izakaya Ninja hall in Asakusa.
If you would like to know more about Japan's Warring States Period, we recommend checking these out!