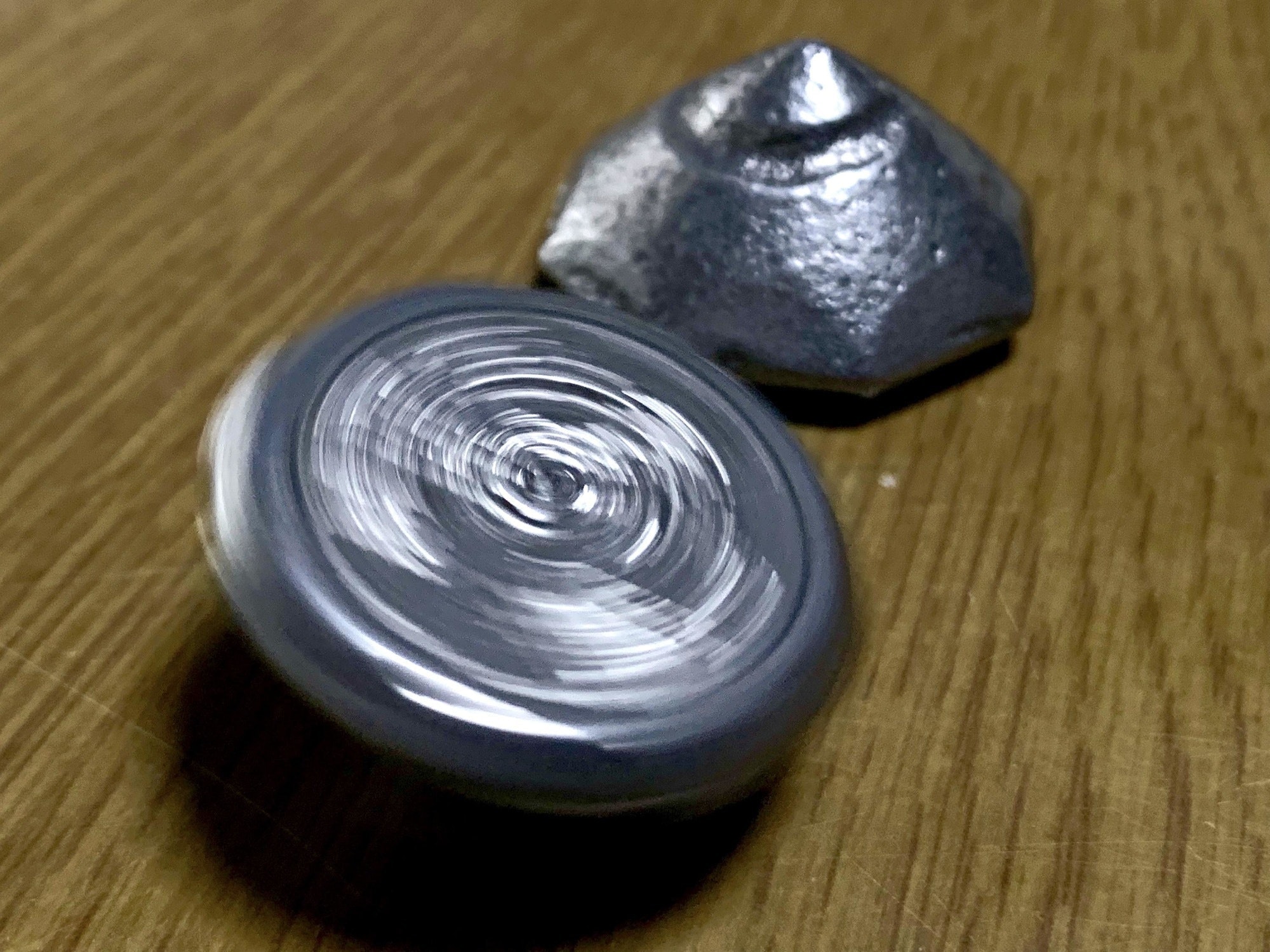 This video clearly explains how to play with Beigoma and also teaches basic techniques for spinning Beigoma that are often difficult for beginners.
After watching the video, you'll be on your way to becoming a Beigoma master in no time!
If you're a total beginner, don't worry, this video has you covered!

Koma are ancient Japanese toys said to have originated in Heian period (794-1185) Kyoto when people played by spinning shells with string.

Beigoma is a kind of Koma (Japanese spinning top) made of cast metal. It was a popular toy among kids from the Taisho period (1912-1926) to Japan's economic boom.
To play Beigoma, you make a playing board by stretching a thick fabric sheet partially over a bucket or a barrel, and players spin their Beigoma onto the surface and have them bang against one another.

Although Beigoma is an old toy, there have been many more people playing with Beigoma, Menko (an old Japanese card game), and other old-fashioned toys, due to a revived interest in old‐fashioned goods.
Also, there are "new" Beigoma based toys such as Beyblade (ベイブレード) and Beigoma Spin Heat (ベイゴマスピンヒート), which are very popular among kids and sold at toy stores and online.
Beigoma competitions are also becoming popular.
The smartphone app "Beigoma Stadium" (ベイゴマスタジアム) is popular among adults as well.

There are various types of Beigoma.
Pecha (ペチャ) is the thinnest Beigoma and is harder to control but quite strong.
Pe-oh (ぺ王) is the most difficult to control but is the most powerful.
Chu-daka (中高) is short but easy to spin.
Maruroku (丸六) is the best for beginners.
Kakuroku (角六) is easy to spin and is also quite strong.
Taka-oh (高王) is about 1.5 times the size of Maruroku, and Bay (バイ) is easy to spin and lasts a long time.
Beigoma players also modify their Beigoma and make their own original versions.

Now we'll introduce how to play Beigoma.
First, make a string to wrap around the Beigoma (video 0:07).
Tie the string and make a few knots.

Next, wrap the string counterclockwise around knots while holding the string tightly with your fingers to prevent it from unraveling. Wrap it slowly in a circle, and your done!
Next we'll learn how to hold the Beigoma.
Hold it with your thumb and index finger, and wrap the rest of the string around your pinky and grab ahold of it. (~3:34)

Finally, let your Beigoma rip! (~4:11)
Make sure not to throw it at an angle when launching it onto the playing board.
Place your right foot close to the board, making sure to launch the Beigoma on the board, and as soon as you launch it, pull the string tightly.

Did you enjoy learning about Beigoma?

The video gives simple instructions on how to play with Beigoma, so even if you've never done it before, don't be shy!
You'll be able to throw some awesome Beigoma in no time!
If you're interested in traditional Japanese toys, be sure to check out the video!