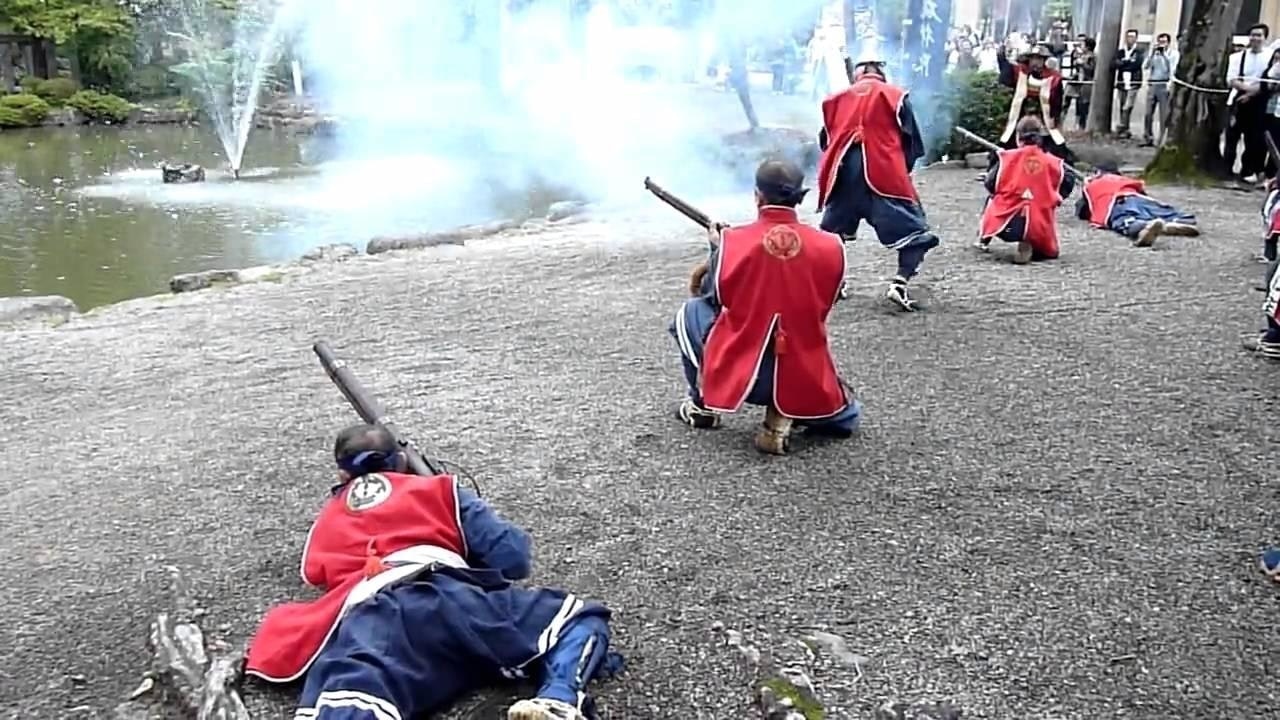 The video we'll be introducing this time is "Demonstration of Real Matchlock Guns" (本物の火縄銃の発砲実演), which as it's title suggests, demonstrates the firing of matchlock guns.

The matchlock is one of the firearms that was introduced to Japan during the age of civil wars (c. 1467 to 1615).
The matchlock is a smoothbore muzzleloader.
The ignition method is classified as a matchlock type due to firing mechanism.
When fired, the fuse comes into contact with a black powder propellant, thus igniting it and causing the gun to fire.

The history of guns in Japan begins with the matchlock gun invented in Europe in 1543 that first landed in Tanegashima of Kyushu's Kagoshima Prefecture.
Because of this it was referred to as a Tanegashima Gun or just "Tanegashima."
According to the "Teppoki" an Edo Period (1603 to 1868 AD) account of the history of guns in Japan, Sengoku military commander Tokitaka Tanegashima adopted matchlock guns immediately after seeing a demonstration of their power, and soon after, matchlock guns spread throughout the rest of Japan.
After its introduction, the design was improved upon, becoming a flash type matchlock using a spring as a trigger to improve accuracy.

The History and Characteristics of the Matchlock

The firearm before the matchlock was a touch-hole typethat was manually ignited by touching a flame to the ignition port, but a serpentine lock type that was operated with an S-shaped metal fitting was devised.
In addition to that, a stock was added, and a matchlock gun was completed.
The match lock system that was invented after that improved upon its range and power, and transformed it into a flint lock system that ignites by striking a flint rock.

Comparing a museum matchlock with modern rifles, one of the things that stands out the most is the shape around the grip, which is very different.
Therefore, it is said that the firing method was to shoot with the elbow stretched out instead of firing with the butt of the gun in one's shoulder.

Oda Nobunaga, who held influence over the entire country during the Azuchi-Momoyama era, used the matchlock on the battlefield, and defeated the Takeda army at the famous battle of battle of Nagashino.
The firing speed, which is a weak point of the matchlock gun, was made practical by forming teams of firing squads which led to Nobunaga's victory.

During the Edo period, the shogunate restricted the possession of matchlock guns.
Technology was stagnant due the national isolation policy that had been implemented by Japan's government, and new guns weren't introduced until the end of the Edo period at which point matchlock guns had become obsolete.

Replicas made by safe gun makers are used in marksman competitions.
Even in many Western countries, Japanese-style matchlock guns are used in quite a few tournaments.
They are also sold to individuals, but they usually do not disclose prices and require you to contact them regarding any inquiries.

In addition, even if you do not compete in competitions, you will need to register possession of one because it is subject to the regulations regarding possession of guns and swords.

A Firing Demonstration at the Yonezawa Uesugi Festival

The Yonezawa Uesugi Festival held in Yamagata Prefecture in Japan's Tohoku region is one of the events where a matchlock demonstration is performed.
The Yonezawa Uesugi Festival is a historic festival that has been held since 1965, and it is an annual festival held at the Uesugi Shrine, which enshrines the Uesugi family's ancestor, Uesugi Kenshin, as well as at Matsugasaki Shrine that enshrines Uesugi Yozan, Uesugi Kagekatsu, and Naoe Kanetsugu.

On the final day of this event, you will be able to see a matchlock gun demonstration performed by 700 performers wearing armor, divided into the Uesugi and Takeda armies, and imitating the battle of Kawanakajima. A standing performer fires from 0:43 in the video, followed by crouching performers from 0:48, and finally from 0:56 we see a performer firing from the prone position.

Summary of the Yonezawa Uesugi Festival

In this article we introduced the history and evolution of the matchlock gun. Did you like it?
In the video, you can see a rare demonstration of the powerful matchlocks, so if you still haven't checked it out yet, we recommend giving it a watch!

If you're interested in this kind of Japanese history, consider a trip to see the Yonezawa Uesugi Festival!