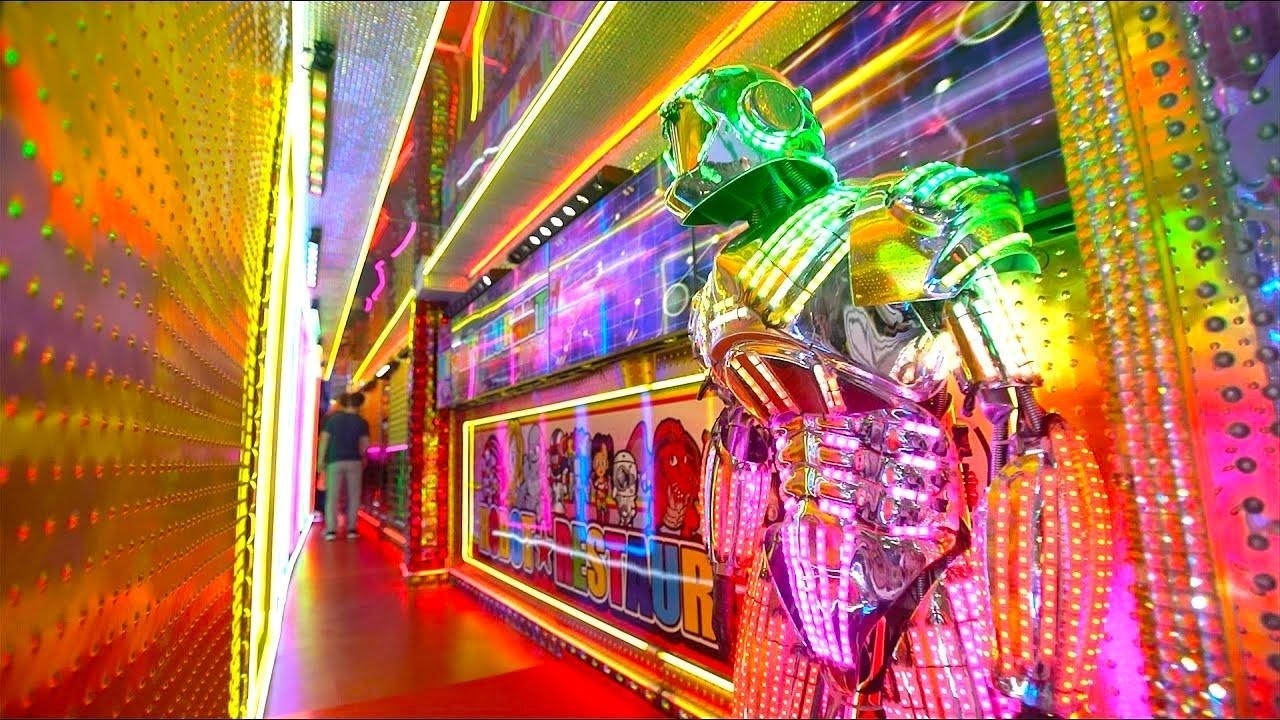 This video called “ ROBOT RESTAURANT in JAPAN - CRAZY!!! ロボットレストラン - HD 4k “ produced by “ beatdownboogie” is a video promoting the robot restaurant in Kabukicho where customers can enjoy a variety of performances.

As you can see from this video, this restaurant is very popular for foreign tourists in Tokyo because of its unique services.
According to trip advisor, the famous travel website, this robot restaurant is chosen as one of 10 best tourist spots in Tokyo and is a favorite among foreign celebrities and famous artists.

This video features how interesting this robot restaurant in Shinjuku is.

What Is Shinjuku's Robot Restaurant?

This robot restaurant was established as an amusement spot in a building in Kabukicho, and cost a total of 10 billion yen (~$92.3m USD) to make.
This is popularly known as “Robo-res”.

The gorgeous interior decorations and various forms of entertainment attracted a lot of public attention and it quickly became a popular spot for foreign tourists as a store that provides original entertainment shows in Tokyo.
You can take many instagrammable pictures while riding a fancy robot!

All areas in this restaurant from the floors to ceiling are flashing.
Stepping inside this restaurant is like stepping into another dimension.
The scene at 0:13 shows this overwhelming atmosphere.

There's also a bar in the same building.
Guests can bring food and drinks purchased at the cocktail lounge to the show rooms as well.
If you make a reservation for a special boxed lunch made by this restaurant, you can eat it during a 90 minute show. If you are interested, check the official web-site.

The entrance fee is rather expensive at 8500 yen (as of January, 2020), But you definitely won't regret experiencing the unique atmosphere provided by this robot restaurant.

Reputation of the Robot Restaurant

About 90% of the customers of the robot restaurant are foreigners.
They can enjoy a unique culture in Kabuki-cho.
If you look at the many photographs of foreign celebrities or prominent figures hanging on the walls of this robot restaurant, you'll know that it's not over-hyped. It attracts a lot of people for a reason.
The restaurant is a really popular spot in Tokyo for foreigner visitors.

Before shows start, you can buy food and drinks or souvenirs on stage.
This 90 minutes entertainment show begins with a Japanese drum performance (0:37).
Enjoy the fantastic atmosphere of Japanese drums with gorgeous illuminations.
There's also the near-future robot show, the robot beat-em-up game, electronic dance performance, robot parade show, huge dinosaurs, and performances by female dancers. You can see the digest version of these performances in the video.

If you watch the video, you'll see how satisfied audiences are by the live performance in the robot restaurant called “Monster Entertainment Show.”
It makes sense that so many visitors want to see this live performance one more time.

Summary of the PR Video for Shinjuku's Robot Restaurant

This video called "ROBOT RESTAURANT in JAPAN - CRAZY!!! ロボットレストラン - HD 4k" produced by “beatdownboogie” promotes the robot restaurant in Shinjuku where so many guests have enjoyed entertainment shows with great originality influenced by the cultures of Kabuki-cho.
Bathrooms are also unique and the interior decorations of the restaurant are instagrammable.

Many experience-based shows such as dance performances or Japanese drum performances are held in this restaurant.
These various types of performances of robots or dancers take audiences to another world.

Why not give it a visit if you're coming to Tokyo ?
A shop serving tea with tapioca located on the first floor of the same building of this robot restaurant is also quite popular.