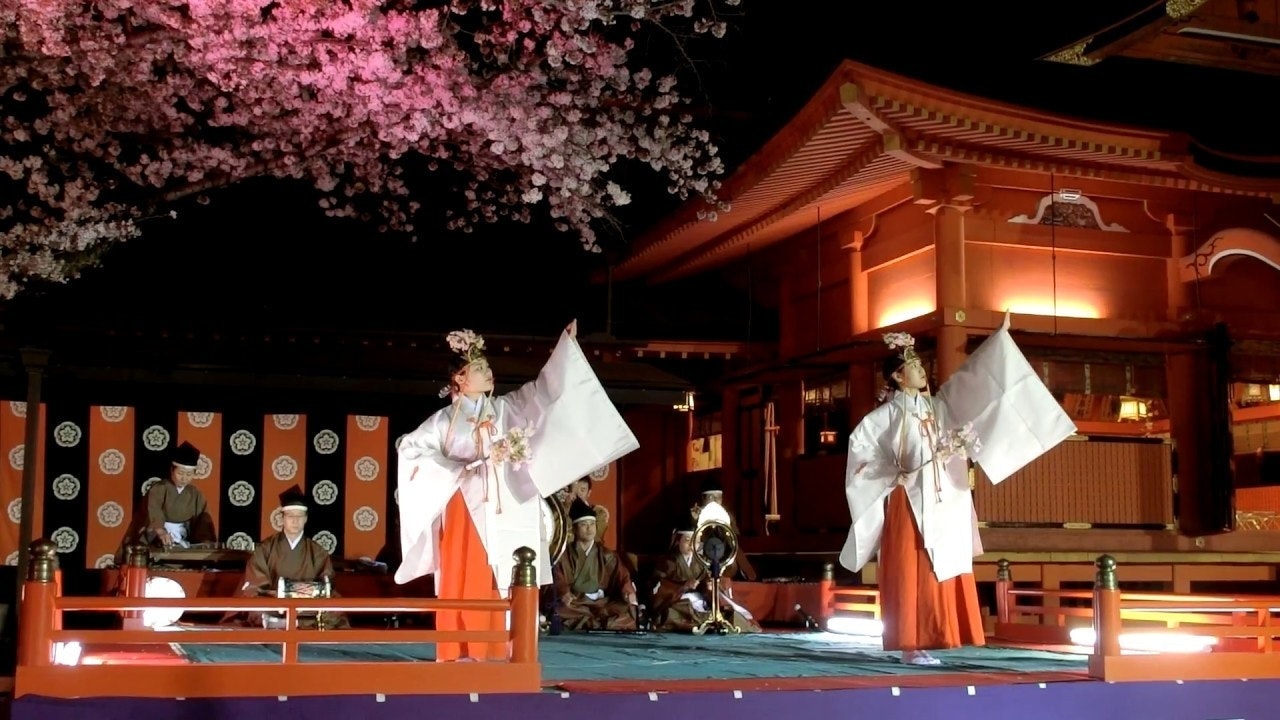 "Toyosaka no Mai" at the Sakura Matsuri Gagaku Concert Performance!

Gagaku and Other Traditional Japanese Cultures

Japan has a variety of traditional music and dance cultures, including the well known Noh and Kyogen.
Some of the notable traditions are the dedication of Bugaku and Kagura (Shinto music) performed with an accompaniment of Gagaku music at traditional festivals held in various regions of Japan.

Gagaku (traditional Japanese court music) and Kagura are traditional cultures that have been handed down in Japan since ancient times as traditional music of the court.
For those who are interested in Japan's beautiful Gagaku and Bugaku performances, we recommend visiting shrines and temples during traditional Japanese events, such as Hatsumode (New Year's visit), Setsubun, Ouka-Sai (桜花祭, Cherry blossom Festival), Nodate (an open‐air tea ceremony), and more.

Toyosaka no Mai, the Gagaku Performance Shown in the Video

Toyosaka no Mai, the performance shown in the video, is a very joyful performance held in the spring.
Women wearing red and white clothing, holding a sakaki or a flower of each of the four seasons, perform a dance to the accompaniment of a sho (a Japanese free reed flute), Hichiriki (a double reed Japanese flute), gaku biwa, Koto and other instruments.

Miko (the shrine maidens) who perform Toyosaka no Mai, as shown at 0:44 in the video, spend countless hours practicing and mastering the dance before the actual performance.

The Ouka-Sai Festival at Fujisan Hongu Sengen Taisha Shrine also includes a performance of "Kujishi no Maki," which originates from Minamoto no Yoritomo's "Fuji-no-Makigari."
It also includes a performance by the Tenma Taiko Preservation Society and the annual festival of the Massha Tenjin-sha Shrine.
In May, "Yabusame" a heroic horseback archery festival is held, attracting many tourists.

Besides the Sakura Matsuri Gagaku Concert, there are many other events that you can visit to experience the charms of Japanese culture.

Summary of "Toyosaka no Mai" at the Sakura Matsuri Gagaku Concert

Toyosaka no Mai is a traditional performance that has been handed down in Japan since ancient times.

The fantastic Bugaku performance under the cherry blossoms at night is so beautiful that you'll never get tired of watching it.
If you'd like to learn more about traditional Japanese performing arts, be sure to check out the video to see all of the intricacies of the performance!