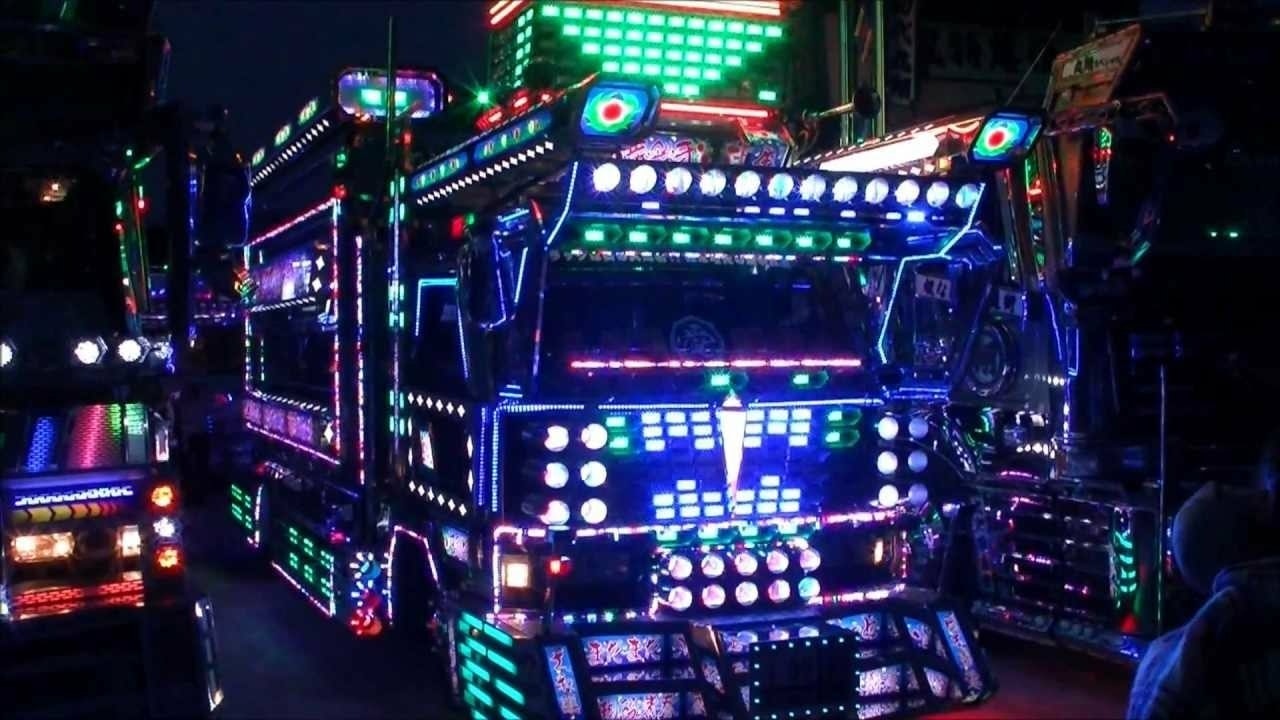 The beauty of dekotora, with their characteristically flashy appearances, can be seen in the video.
If you're interested, be sure to check it out!
In this article, we'll introduce the charms of the shimmering dekotora trucks.
Be sure to follow along with the video!

A Look at Japan's Dekotora

Dekotora is an abbreviation for decoration truck (in Japanese truck is pronounced "torakku").
Dekotora are artsy trucks that are decorated with glittering electric illuminations, and a flashy exterior.
Parts such as the front deck, visor, and front bumper, are especially flashy.

Dekotora culture is a unique subculture in Japan, and due to its unique appearance it has also begun attracting attention from overseas.
The beautiful trucks are made by decorating the exterior in a variety of ways, such as painting the body in flashy paint, adding electrical equipment such as lanterns and marker lamps, or adding aero parts made of chrome plating and stainless steel.

At 2:02, you can see both the interior and exterior of a dekotora. The interior is decorated with stickers and other gadgets, and you can see the dedication of the owner to their vehicle.

However, if you put too many decorations on the vehicle, there are times when it won't pass the vehicle inspection, so dekotora fanatics have to keep this in mind when designing their trucks.
You can see a variety of unique dekotora on Instagram, or at events and gatherings.

There are also plastic models, radio controlled dekotora, and the truck game “Bakuso Dekotora Legend” that you can purchase, so you can enjoy dekotora at home as well.
There are different styles for decorating dekotora as well. Some categories are “Gundam Art,” “Modern Art,” “Kansai-style Art,” and “Retro Art.”

The History of Japan's Dekotora

The origin of Japan's dekotora is said to be from seafood transport trucks using stainless steel plates to fix the deterioration of the body.
This deterioration was due to the effects of the snow-melting agents.
The movie “Truck Guys” which was released in 1975, sparked a boom in popularity and many people began making dekotora.
The famous vehicle "Ichiban boshi" which appeared in "Truck Guys," was turned into a plastic model and became very popular among children at the time.

Unfortunately, the movie "Truck Guy" received complaints from the police due to its explicit depictions and the movie was discontinued.
Because of this, the dekotorora craze slowly began to fade away.
Currently, with movies such as "Dekotora Girl Nami" and "The Eagle of Dekotora," dekotora have once again gained public attention.

In this video we showed, "【HD】Story of the modified vehicles～The latest Dekotora Episode②～,” produced by “Tenku Ranbuー Custom Videosー"; a video that introduces Japan's flashy dekotora trucks.
Dekotora are decked out with beautifully illuminated electronics and paint, and their impressive appearance fascinates onlookers.
These flashy dekotora go for a pretty penny, even used.

Currently, dekotora are on the decline; However, videos of them on platforms such as Instagram, have garnered a lot of attention, so if you're interested, definitely check them out!