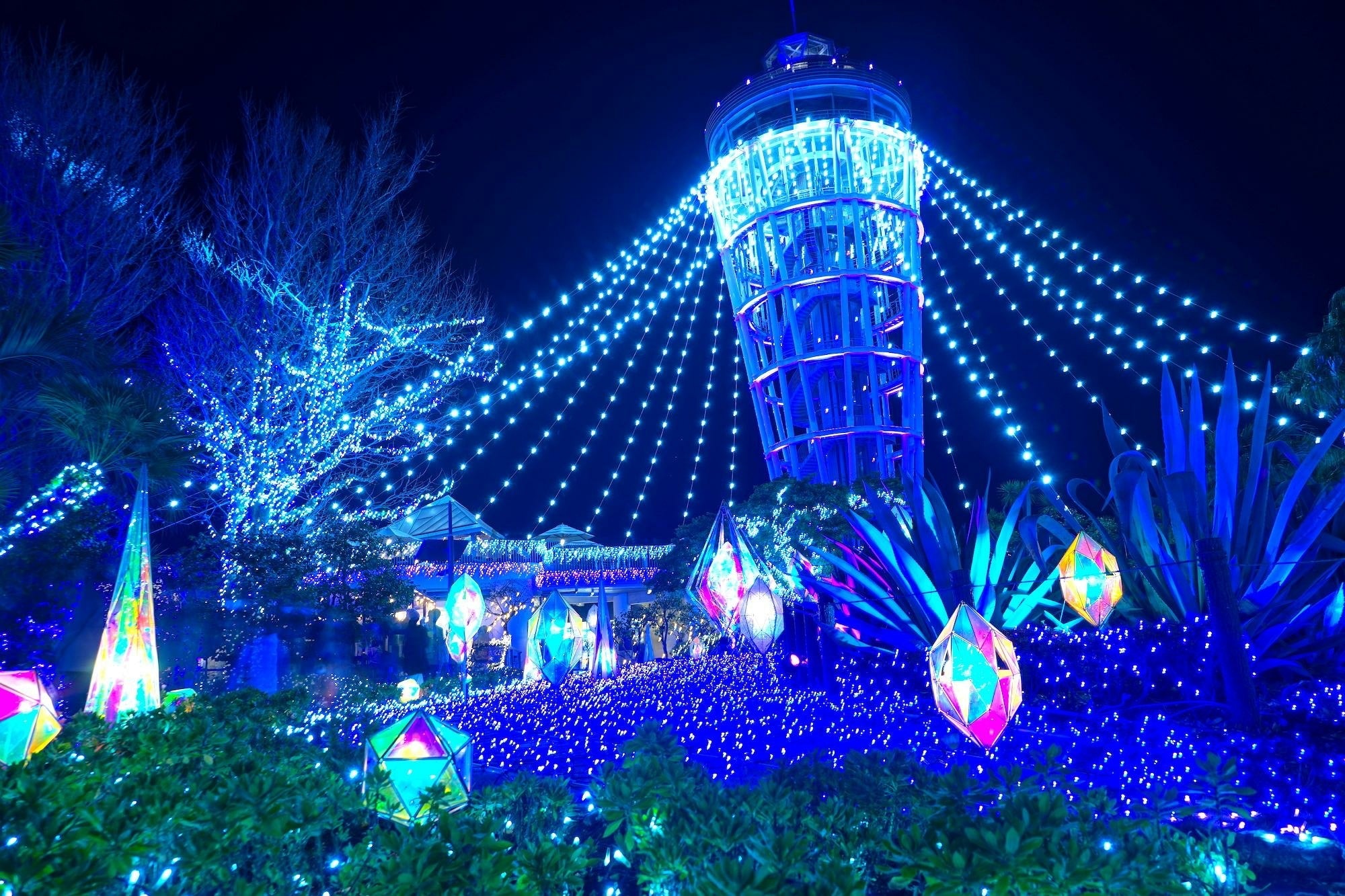 The Jewel of Shonan – An Illumination Event on Enoshima: Video Introduction

This video, titled "Enoshima Illumination｜the Jewel of Shonan｜Filmed on a Sony A6600｜4K Video" (江ノ島イルミネーション 湘南の宝石 ソニーa6600撮影 4K撮影), was uploaded by "Shumi-chan" (趣味チャン). This video shows 2021's "The Jewel of Shonan," an illumination event that takes place on Enoshima. Be sure to check out the video showing 8 minutes of twinkling illuminations covering the spacious event site before reading along.

The Jewel of Shonan – An Illumination Event on Enoshima: Highlights & Schedules for 2022

The Enoshima illumination "The Jewel of Shonan" is a popular winter event on Enoshima, which has been held since 1999 and is celebrating 23 years.

With the Enoshima Samuel Cocking Garden and the Enoshima Sea Candle (formerly known as the Enoshima Observation Lighthouse) as the main spots of illumination, it's a community-integrated festival of lights and colors that takes advantage of the sea and sky of Shonan and the location of Enoshima.

Let's take a look at some of the highlights of the event while watching the video. After entering Enoshima Samuel Cocking Garden and passing through the tunnel of the Shonan Chandelier made up of approximately 70,000 Swarovski crystals, the main attraction, the illuminated Enoshima Sea Candle, will come into view.
[Video] 0:11 - Entering the Event
[Video] 1:48 - Shonan Chandelier, a Tunnel With a Gorgeous Glow

The view from the observatory is also exceptional, and visitors can enjoy a breathtaking night view of Sagami Bay.
[Video] 3:41 - Heading to the Sea Candle Observation Deck Floor
[Video] 4:25 - The Illumination from the Outdoor Observation Deck

As the name suggests, the illumination along the pathway of 'Jewel Forest' resembles jewels scattered all around. The highlight of Jewel Forest is the delicate lighting.
[Video] 6:02 - Jewel Forest Pathway
[Video] 7:12 - Illumination of Mt. Fuji

Although the video ends with the illumination of Mt. Fuji on the wall, the event itself is a large-scale event of lights and colors in harmony with the location of Enoshima. Beautiful lights and illuminations can be seen at Enoshima Shrine (江島神社, Enoshima Jinja), Nakatsumiya Square (中津宮広場. Nakatsumiya Hiroba), Shonan Jewel Square (湘南宝石広場, Shonan Houseki Hiroba), Oiwayamichi Street (御岩屋道通り, Oiwayamichi-dori), Enoshima Iwaya, and Enoshima Yacht Harbor.

Before the Enoshima Illumination "Jewel of Shonan," the "Shonan Candle" autumn event will be held for 23 days from October 15 (Sat) to November 6 (Sun).

Approximately 10,000 candles will be lit at the Enoshima Samuel Cocking Garden on Enoshima Island.

The warmth of the candlelight is very different from the dazzling winter illumination. Autumn is a season when people start to feel lonely, so consider making some date plans for the Shonan Candle and enjoy a nice evening out.

At the Enoshima Samuel Cocking Garden, where the Enoshima Sea Candle, a symbol of Shonan, stands, light-themed events are also held in the summer.

As a summer tradition, the Enoshima Lantern Festival has been held annually since 2008, and this year the event was held from July 23 (Saturday) to August 31 (Wednesday).

The event features 1,000 lanterns, as well as the light installation "Hikari no Emaki" (光の絵巻, lit. 'A Picture Scroll of Lights') at Enoshima Shrine, offering a different atmosphere in summer than in autumn and winter, making it an event you don't want to miss.

Summary of Illumination Events on Enoshima

Enoshima is known for its impressive winter illuminations, and every year large scale light events are held in summer, fall, and winter in order to revitalize the local community.

No matter which season, the events are always romantic thanks to the perfect location of Enoshima. We encourage you to go out with your family and friends, or for a nice, romantic date. You're sure to have a great time, making memories and taking photos at all of the picturesque photo spots.

Enoshima is also a great place for tourists, as it's relatively easy to get to even from distant places.
However, because this is a popular event, traffic jams and other congestion are to be expected, especially on weekends and holidays. Parking lots in the neighborhood can also fill up. Therefore, we recommend that you avoid coming by car if possible and use public transportation.
Enjoy the festive mood of the colder months with a trip to this heartwarming illumination event.

まつだあゆみ（Matsuda Ayumi）
A write that was born in Hiroshima and moved to Tokyo after becoming an adult.
SUBSCRIBE