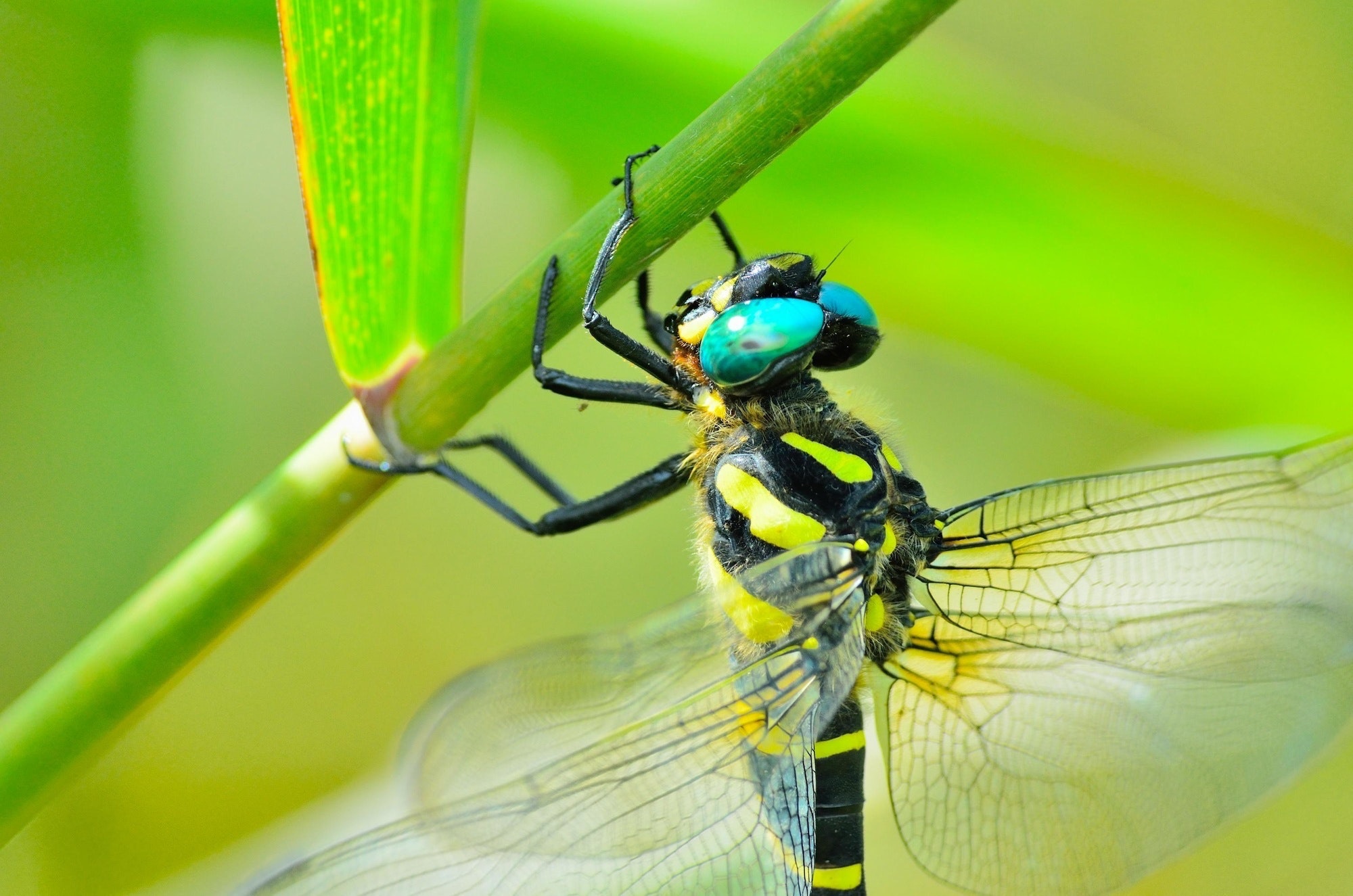 This video, titled "Oniyanma (The Largest in Japan)" (オニヤンマ（日本最大）), introduces the oniyanma, a large dragonfly belonging to the Cordulegastridae family and Odonata order. The massive dragonfly has an abdominal length of 7 cm for males and 8 cm for female.
Those that inhabit Hokkaido (北海道, Hokkaido), Yakushima Island (屋久島, Yakushima), etc., have a tendency to be smaller.

Their eyes are a bright emerald green color, but change color when they are made into specimens.
Their body is black with a yellow pattern and fine horizontal stripe at each section.

They are compared with sieboldius albardae (ko-oniyanma), but these belong to the Gomphidae family, and are different from oniyanma in that their compound eyes are placed separately on both sides of their head, and their larvae are flat and disk-shaped and live on stones at the bottoms of rivers.

Oniyanma are widely distributed throughout Japan, mainly around streams, riverbanks, outskirts of forests and mountainous areas, but they can also be seen on the plains and in urban areas when it is cooler.
International visitors may be surprised to find them in urban areas because of their very large area of activity.

When you find a female oniyanma, you can catch it by taking advantage of its habit of stopping its movement and hovering.
Male Oniyanma consider anything that flaps its wings to be female, so if you hold a fan or other wind-producing object in front of the male, it will stop moving.
If you're a bug collector, you can use this as a reference when collecting!

The Life Cycle of Oniyanma

Oniyanma are carnivorous, feeding on moths, flies, and other small flying insects.
Their natural predators are birds, bats, etc.
They can bite humans as well, so be careful.

Male oniyanma mate with females they meet while patrolling their territory.
After mating, the female will go to a clean river or puddle to lay her eggs.
Upon finding a suitable location, oniyanma perform a unique spawning display in which they will drop to the surface of the water while standing up and flying.
You can see a female oniyanma laying eggs at 0:30 in the video.
They spawn by thrusting their ovipositor into the mud in the water.

Eggs hatch about 1 month after being laid, and the larvae are called nymphs.
Nymphs are a translucent white with no wings and a short abdomen.
They burrow into the mud to lie in wait for food to pass.
When they are young, they feed on water fleas, mosquito larvae, etc., but as they grow older they begin feeding on tadpoles, small fish, etc.
In addition, they feed on each other as well as nymphs of other species and, as a result, only the strong survive.

It takes five years for them to become adults, and they molt about ten times before reaching this stage.
Eventually, compound eyes pop out and the mouth part of the molt becomes a unique face as if they were wearing masks.
Eventually, scaly wings form on their backs, and on a sunny summer day, they climb up from the bottom of the water to a stone or pile on the surface of the water and their backs split open and they emerge as adults.
Immediately after hatching, their wings are white and shrunken, but over night, the black and yellow pattern appears and the wings solidify.
You can amazing footage of an oniyanma molting at 0:58 in the video.

After emerging as adults, they continuously feed for about a month before mating. The total life span of an oniyanma is 5-6 years.

Did you enjoy learning about the oniyanma, the largest dragonfly in Japan?

Footage of them laying eggs is quite rare, so if you still haven't yet, be sure to check it out!