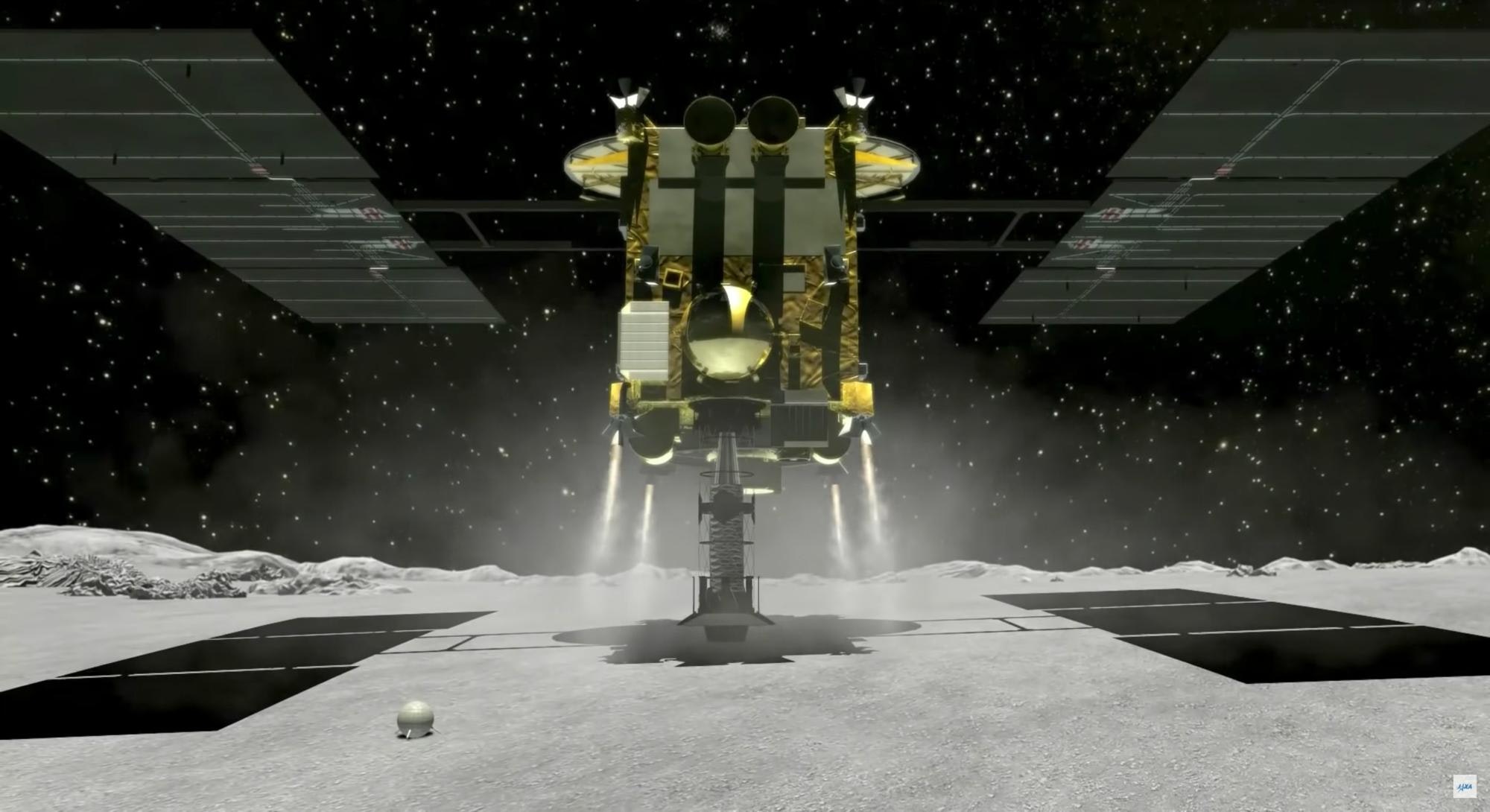 This video, titled "「Hayabusa 2」CG Conceptual Video of Touchdown/"Hayabusa2" CG Animation"（「はやぶさ2」タッチダウン想像図CG/"Hayabusa2" CG Animation), was released by "Jaxa | Japan Aerospace Exploration Agency."
“Hayabusa 2,” introduced in the video, is an asteroid surveying spacecraft developed by the Japan Aerospace Exploration Agency JAXA as a successor to the spacecraft “Hayabusa.”

This video introduces JAXA’s CG video of Hayabusa 2 touching down on the asteroid Ryugu and retrieving a surface sample.
It's only a conceptual video; however, the plan of Hayabusa 2’s touchdown is visualized in an easy-to-understand manner.
The basic settings and touchdown methods of the “Hayabusa 2” are the same as its predecessor, Hayabusa; however, the spacecraft has been significantly improved and the ion engine and antenna surroundings have been greatly augmented.
The news that this groundbreaking mission was successful also attracted a lot of attention around the world.
Incidentally, “Hayabusa” is also used as the project name for JAXA’s asteroid survey project.

The Touchdown of Hayabusa 2

The first “Hayabusa” mission’s goal was to bring back rock samples from asteroids for the first time ever.
The mission succeeded, and the return of “Hayabusa” received praise from all around the world; in Japan, it received so much attention that it was made into a movie.
Whereas the first Hayabusa was an experimental machine, Hayabusa 2, shown in the footage, collected samples from the surface of an asteroid which has organic matter and water on it. And the developmental process differs from its predecessor in that it was designed to collect surface samples from an asteroid with organic matter and water to obtain clues about the existence of rare metals and the mystery of the birth of life.

The survey plan of the “Hayabusa 2” was also carefully scheduled.
The “Hayabusa 2” was launched from the Tanegashima Space Center Large Rocket Launch Site in 2014 to coincide with the timing of when the asteroid Ryugu would be closest to the Earth.

As you can see from 1:09 in the video, once the spacecraft has come into the closest proximity with the asteroid Ryugu, they first launch an impactor command with the goal of creating a crater on the surface of Ryugyu to make it easier for Hayabusa 2 to land.
This impactor command was named "Explorer" after the world’s first satellite series.

Hayabusa 2 will attempt to touch down after taking rock samples scattered in the vicinity during the second Explorer launch.
A small rover was also placed on the asteroid Ryugu, which collected as many surface samples as possible after touchdown and returned to Earth by fully autonomous operation.

The Ryugu project was featured on NHK as a special program and was also broadcast overseas. It was very well received abroad, and managed to attract attention from all over the world.

The success of Hayabusa 2's touchdown mission is said to be an incredible feat.
You can see the details on JAXA’s official website.