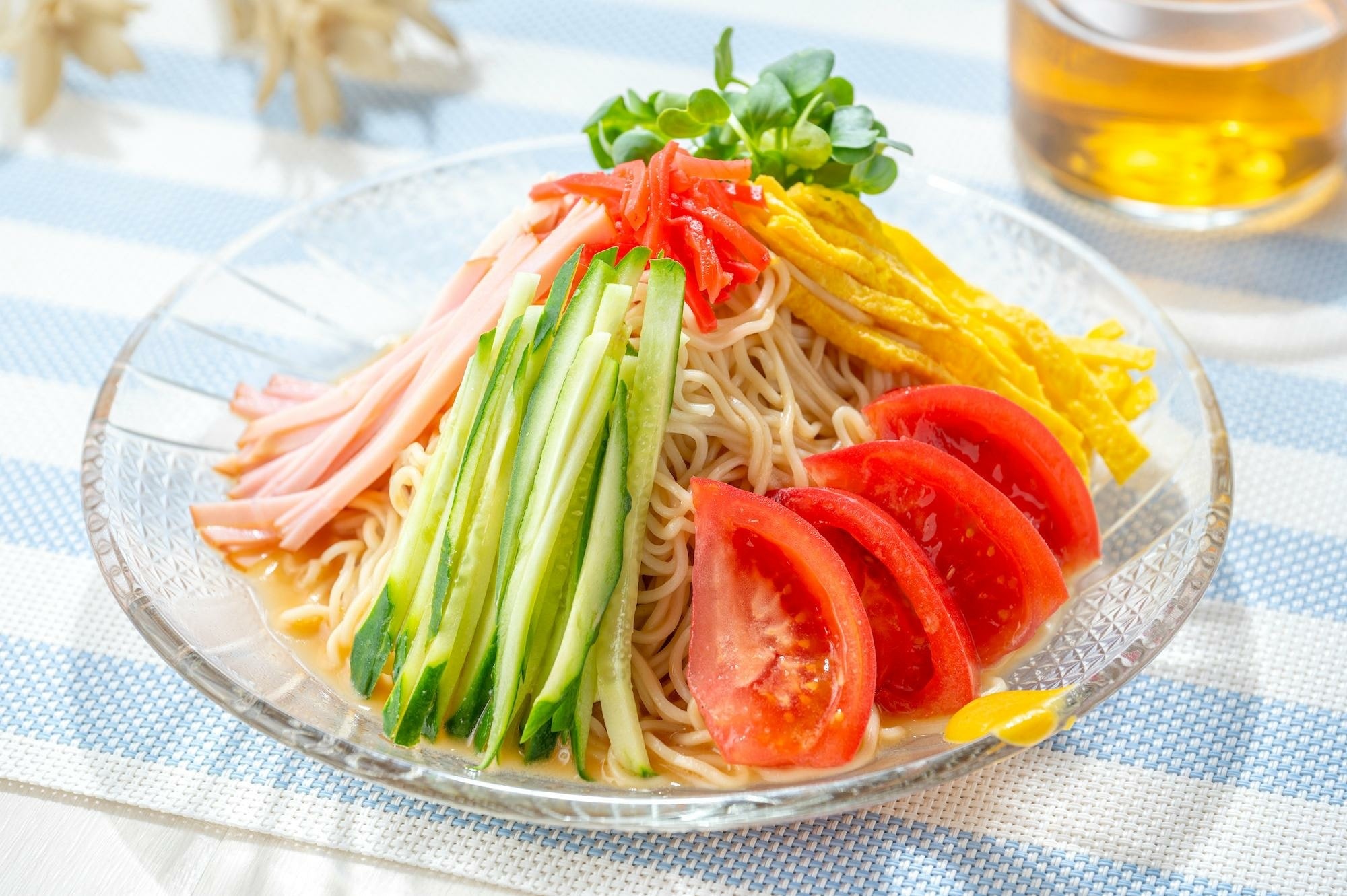 Shinichi and Satoshi introduce how to make the Japanese dish hayashi chuka, and the video has tons of comments saying how great the recipe is.

Hiyashi chuka is a dish of chilled Chinese noodles in a Japanese-style recipe. It's a popular Japanese dish both in Japan and around the world.

In the comments section of the video, people even mention that it's a great recipe if you can't find many Japanese-style ingredients at your local supermarket.

If you're looking for a refreshing noodle dish to cool off this summer, be sure to give this recipe a try!

A Classic Japanese Summertime Dish: The History of Hiyashi Chuka and More!

Hiyashi chuka is a Japanese noodle dish served chilled and topped with vegetables, Japanese-style omelet, ham, and other ingredients.
Despite using Chinese noodles, the dish originated in Japan. In Japan's Kansai region, it is popularly known as "rei-men" (冷麺, lit. 'chilled noodles').

Hiyashi chuka is now a popular summer dish in Japan. Many restaurants serve it as a limited-time summer menu item. If a restaurant in Japan has started selling hiyashi chuka, you'll know summer has arrived in Japan!

Hiyashi chuka is perfect for the hot summer months because it's cool and goes down smooth, and vinegar is used to stimulate the appetite. In Japan, hiyashi chuka has become a popular dish and is now sold at convenience stores and supermarkets.

Ingredients for hiyashi chuka are generally cucumber, ham, tomatoes, and tamagoyaki (Japanese omelet), but ingredients vary from restaurant to restaurant and home to home. You can choose whatever ingredients you prefer.

For noodles, use ramen noodles; it is important to cool them thoroughly after boiling so they don't continue to cook. For sauce, soy sauce, vinegar, sesame sauce, and ponzu are commonly used.

Recently, however, many different arrangements have been devised, and there's a wider variation in taste and appearance, from spicier flavors to recipes using different kinds of ingredients.

Here, we'll go over the basic recipe for hiyashi chuka.

[Preparing Hiyashi Chuka]
1. Combine all the ingredients for the sauce, mix well, and refrigerate.
2. Add sugar and salt to beaten egg and fry thinly in a pan.
3. Thinly slice the cucumber, ham, and egg into thin strips. Cut the tomato into fourths.
4. Boil noodles until al dente or to your liking, then cool in ice water.
Arrange the noodles on a plate, top with the ingredients, and pour the sauce over the noodles to complete the dish.

You can see how the ingredients are cut in the video.
[Video] 1:43 - Cutting ingredients into strips

[How to Make Hiyashi Chuka Sauce]
Mix the seasonings for the tare.

The recipe for hiyashi chuka sauce is very simple! Simply mix the ingredients together. If you want to eat it chilled, make the sauce ahead of time and refrigerate it.

This is a nice and easy recipe for making hiyashi chuka chilled noodles. The appeal of hiyashi chuka is that you can easily change the flavor to your liking. You can also arrange it using your favorite ingredients and sauce, so we will introduce some simple ways to prepare it.

・Change the Ingredients
You can use pork instead of ham, or a half-boiled egg instead of a thinly sliced omelet. You can also try using avocado or tuna.

・Boil the Noodles Differently
The way you boil the noodles changes how firm they are, so adjust the boiling time to suit your own preferences.

・Change the Sauce
There are many different ways to make sauce for hiyashi chuka, but simply mixing the seasonings makes it easy to create a delicious sauce.

When eating hiyashi chuka, ponzu or mentsuyu may be used as a base. Sesame sauce made with kneaded sesame is popular for its rich flavor.

Summary of How to Make Hiyashi Chuka, a Japanese Chilled Noodle Dish

In this article, we introduced a basic recipe video for hiyashi chuka, a chilled Chinese noodle dish made in Japan. The video shows exactly how to make the dish, so be sure to check it out.

Sushi, ramen, tempura, sukiyaki, and other Japanese dishes are popular all around the world. Hiyashi chuka, a popular Japanese dish during the summer, can easily be made outside of Japan with a simple recipe.

Beautifully arranged with a variety of colorful ingredients, hiyashi chuka is a delicious dish that looks great on Instagram. Be sure to look up hiyashi chuka to see some of the different ingredients and serving styles.

Another appeal of hiyashi chuka is that you can change the flavor of the dish depending on the ingredients, sauce, and toppings. Why not make your own version of hiyashi chuka this summer and stay cool even in the summer heat?