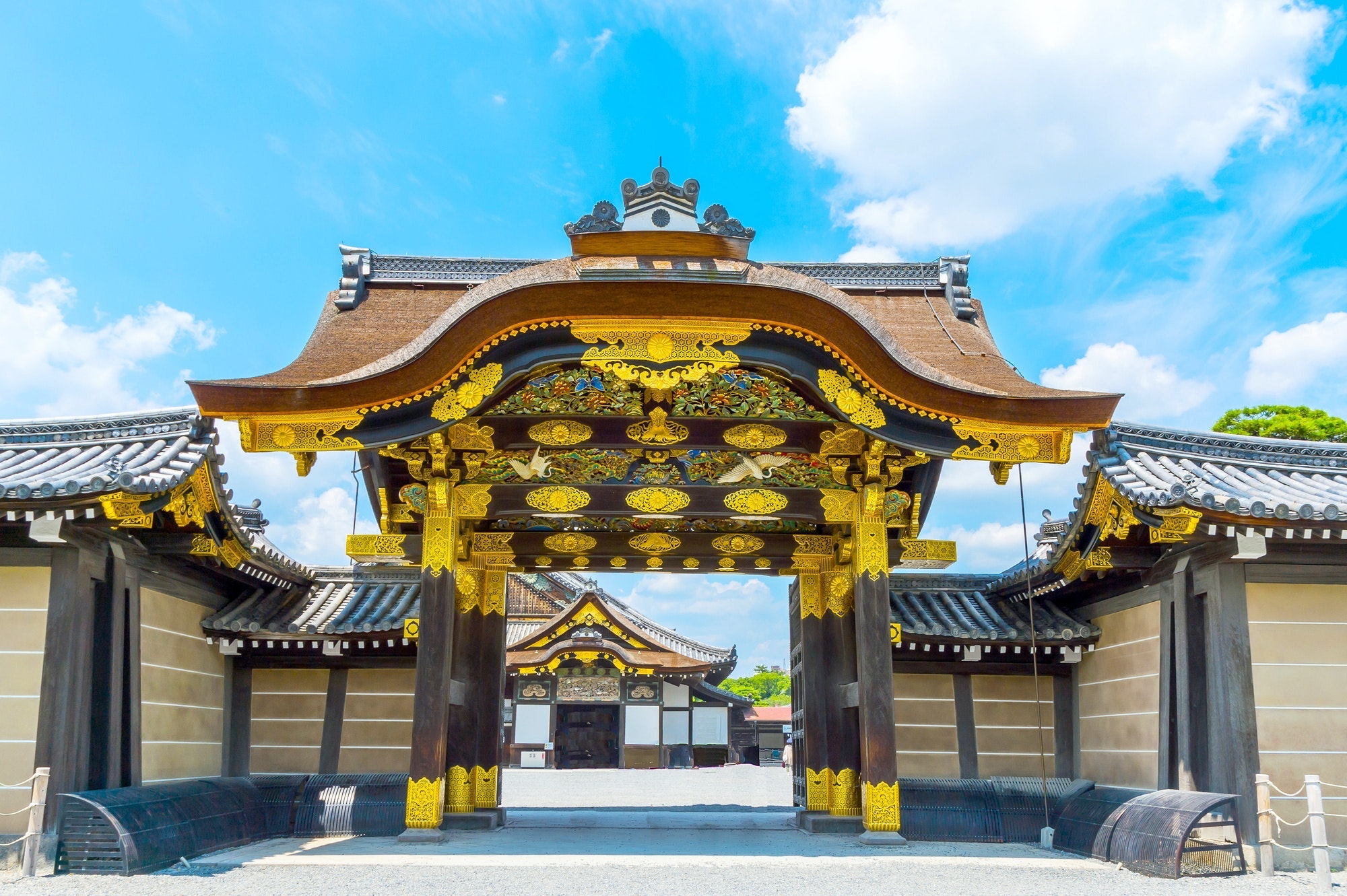 More About Nijo Castle - The History of the Castle

Nijo Castle, built in Kyoto City (京都市, Kyoto-shi), Kyoto Prefecture, in 1603, was built by Tokugawa Ieyasu, the first shogun of the Tokugawa Shogunate.
The castle was built to protect the Kyoto Imperial Palace and also acted as a lodging when the shogun came to Kyoto.
The castle flourished for a while, but after the third shogun, it was not used again until the end of the Edo Period.

The Famous Architecture of Nijo Castle Shown in the Video

Nijo Castle's Ninomaru Palace (outer bailey palace) is designated as a National Treasure.
22 buildings, including Higashi Ote-mon Gate, Karamon Gate, and the Honmaru Palace (inner citadel palace), and a total of 1016 wall paintings in the Ninomaru Palace have been designated Important Cultural Properties.
The Ninomaru Garden is designated as a Special Place of Scenic Beauty.
The wall paintings are luxurious and gorgeous artworks created by the Kano School, the official painters of the Shogunate.
You can see them from 1:40 in the video.

Karamon Gate is decorated with the Imperial Chrysanthemum emblem as well as the Tokugawa family's triple hollyhock crest in gold-work and carvings.
The main gate of the Ninomaru Palace is Kiritsuma-zukuri style with a Hiwadabuki style roof and is supported by four pillars with Karahafu.
You can see the beautiful main gate full of historical elements from 0:36 in the video.

Nijo Castle is fully surrounded by Japanese-style gardens, Western-style gardens, and gardens with a mixture of both Japanese and Western styles.
These include Koun-tei, the Waraku-an Tearoom, Seiryu-en Garden, and the Honmaru garden.
The Honmaru Garden, surrounded by fresh greenery, can be seen from 2:41 in the video.

In spring, approximately 300 cherry trees of 50 different varieties bloom all around the castle grounds.
At Niji Castle, you can enjoy the seasonal scenery.
There's plum blossoms and rhododendrons, and in the summer you'll find Japanese pagoda trees, crepe-myrtles, morning glories, and palms, in the fall, beautiful autumn foliage, and in winter, you can enjoy the beautiful snowscapes of the area.

In the 2nd year of Reiwa (in 2020), the castle hosted the "Nijo Matsuri (Nijo Castle Festival)" an art aquarium castle illumination event.
The 400th anniversary exhibition and collection hall is also worth checking out.

Summary of Sightseeing at Nijo Castle

As shown in the video, Nijo Castle has many sights to see, including the historical buildings and the elegant gardens where you can enjoy the four seasons of Japan.
Nijo Castle also launched the Nijo Castle Owners’ Fundraising Campaign to accept donations to help with construction, so if you are interested in the project, your generous support is greatly appreciated.