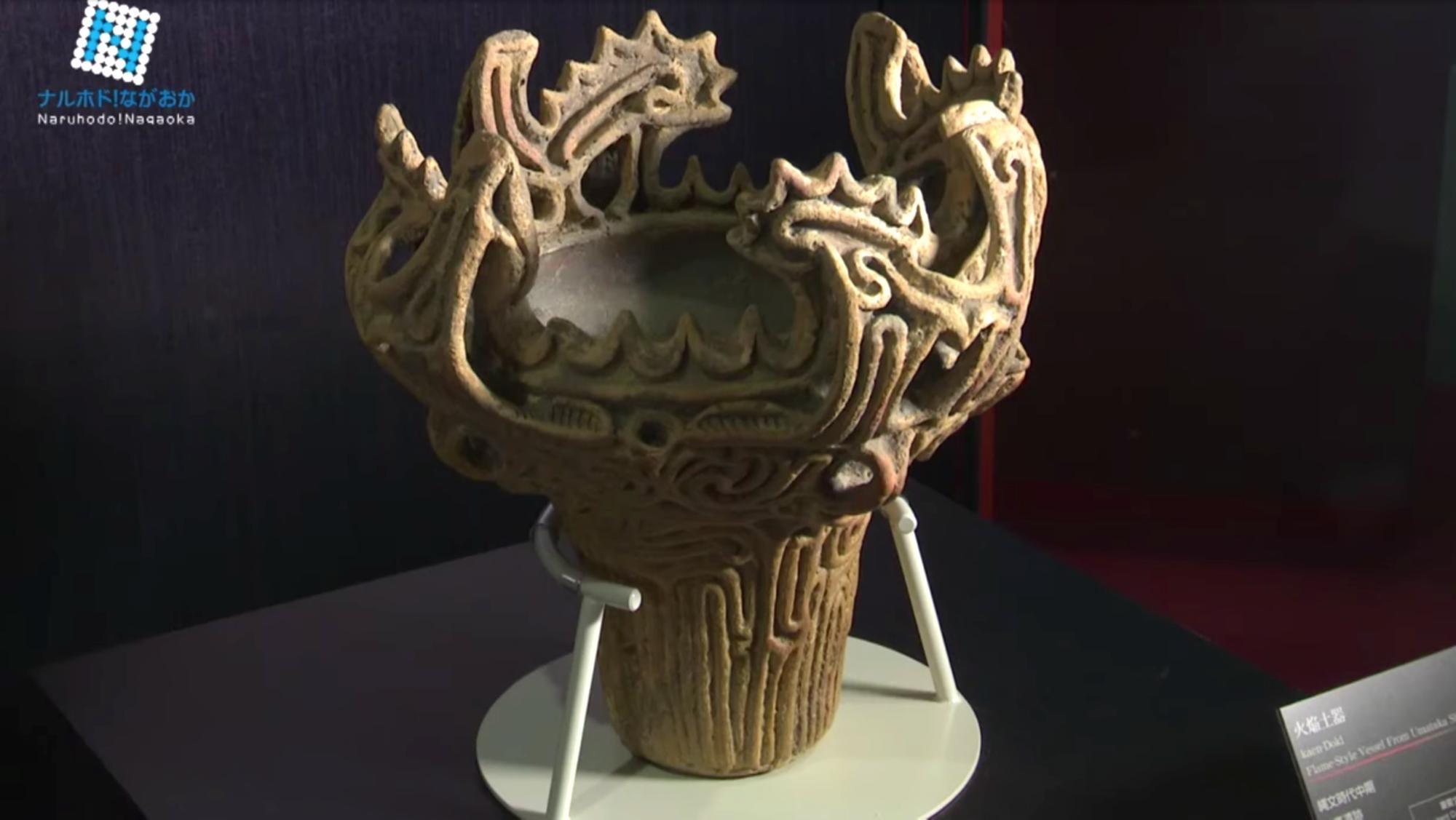 Approximately 80 years ago, flame pots were excavated at the Umataka Archeological Site in Sekihara, Nagaoka City in 1936.
It was excavated by archeologists, Kensaburo Kondo and his parents, and later became a nationally designated historic site as the "Umataka and Sanju Inaba Archeological Site" because of the elucidation of the settlement and the discovery of pristine artifacts.

The Mataka Jomon Museum opened in Nagaoka City in 2009 as a museum facility to preserve, exhibit and utilize these materials.
This is the only museum in Japan with the theme of flame pots, and the museum has over 1,000 items on display.
In 2014, the Emperor and Empress of Japan also visited the museum.
This can be seen at 2:46 in the video.

How Flame Pots Were Made

Looking at the designs, it's easy to tell that these are not simple designs. So then how were flame pots made?
Flame-type pottery, including flame pots was used to cook food just like earthenware pots. This is known because they were found to be covered with soot and burnt residue.
There are two classifications for these vessels: flame pots and flame-style pottery. Flame pots were the first vessels to be excavated by Kondo Junsaburo, while "flame-type pottery" is distinguished from similar pottery excavated thereafter.
This is explained from 2:51 in the video by the Chief of the Umataka Jomon Museum.

A similar type of earthenware is crown pots, but they have distinctly different rims and handles, and are thought to have been historically different from flame-type pottery.

Sharing Flame Pots With the World

The Shinanogawa Flame Highway Cooperation has been working together with 4 cities and 1 town to promote the adoption of flame pot designs for the Olympic torch stand in the 2020 Tokyo Olympics.
At the 1964 Olympic Games in Niigata, a flaming earthenware torch stand was used, and it is still standing in the Niigata City Athletics Stadium today.

These activities are widely performed by the Jomon Culture Supporters, an organization that makes 3D images of flame pots and flame-type pottery available to the public, and also holds workshops such as the Nagaoka Pottery Club to publicize their appeal.
In addition, the British Museum in London has a permanent exhibition of flame pots and manholes with motifs of flame-style pottery and famous fireworks shows.

Meanwhile, the story of the flame pots of Nagaoka City, "Flame -Style Pottery of the Shinano River Valley and the Culture of the Snow Country," has been recognized as a Japanese heritage.

Did you enjoy learning about ancient Jomon pottery?
The pottery, discovered in Nagaoka City, Niigata, is incredibly beautiful and impressively designed considering when it was made.

This video shows the beauty of the art and the flow of history that attracts many people.
If you like pottery, be sure to visit Nagaoka City!