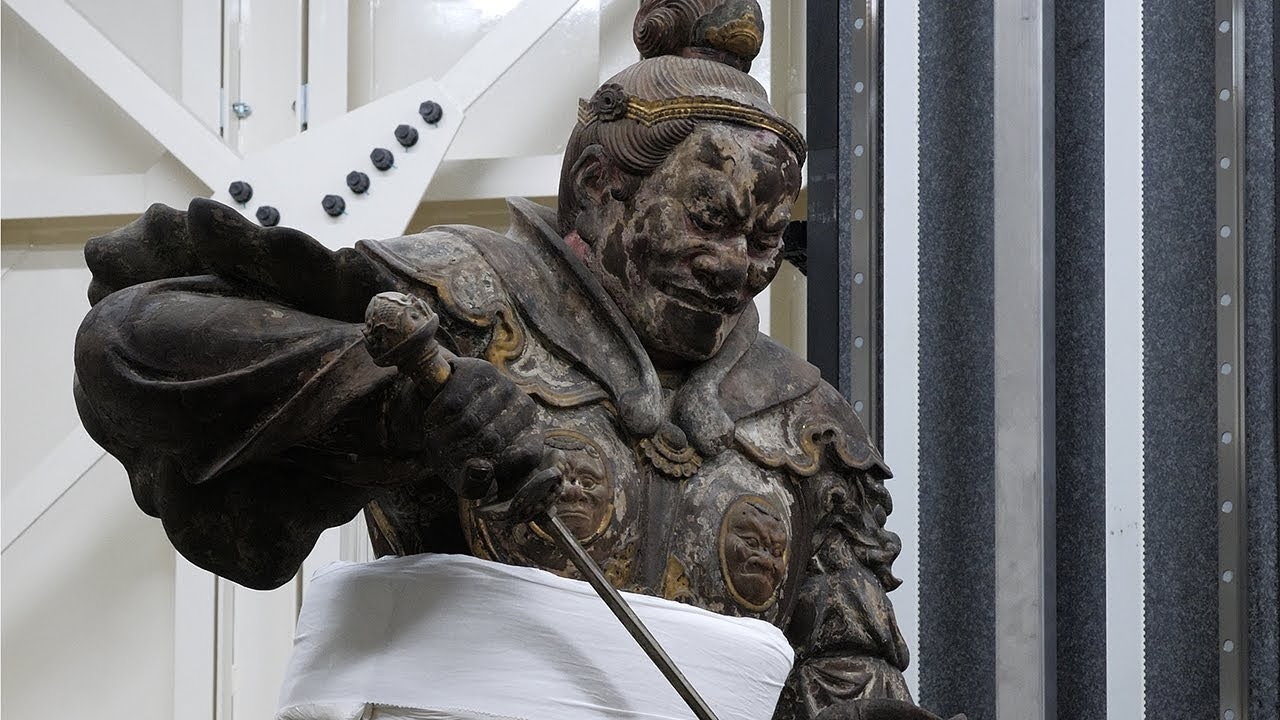 CT Scanning Research of the Four Heavenly Kings Statues of Nan'en-do at Kofukuji Temple in Nara!

In 2017, the Tokyo National Museum conducted CT scans on the Buddhist statues of Kofukuji Temple in Nara Prefecture (奈良県, Nara-ken) to coincide with a special exhibit called "Unkei—The Great Master of Buddhist Sculpture."
It opened up the possibility that the creator of the Mujaku and Seshin standing statues (無著世親菩薩立像, Mujaku Seshin Bosatsu Ryuzo), known as the most highly acclaimed Japanese sculptures, was none other than genius Buddhist sculptor Unkei.
Presently in Japan, it is said that there are 31 other statues created by Unkei, but there is a likelihood that the number will rise as surveys continue.

The CT Scan Research of the Four Heavenly Kings Statues

According to the video, by CT scanning the Four Heavenly Kings statues of Nan'en-do, and the Mujaku and Seshin standing statues of the North Round Hall (北円堂, Hokuendo), it was discovered that wooden parts containing tree cores had been combined to make both groups of statues.
It is therefore said that the Four Heavenly Kings statues at Kofukuji Temple were created by Unkei.
The commonality in technique used in the Mujaku and Seshin statues is an important factor to back the claim that the creator of both groups of statues is Unkei.

In the video, the statue, over 2 meters tall, is neatly wrapped, and from 0:49 in the video, the x-ray CT scanning begins.
From 0:10 in the video, Ryusuke Asami, section chief of the planning division at the Tokyo National Museum, says in interview, "the Four Heavenly Kings statues have never been photographed using x-rays before and the structures of the insides of the statues has also not been understood."

What are the Four Heavenly Kings?

The Four Heavenly Kings statues at Kofukuji Temple were thought to be the works of Unkei’s father, Kokei, but from this research and researches on their styles, it has become increasingly believable that these were created by the hands of Unkei himself.

The National Treasures and Important Cultural Properties of Kofukuji Temple

Summary of the Four Heavenly Kings of Kofukuji

This article introduced the massive discovery of the Four Heavenly Kings of Kofukuji possibly being created by the genius Buddhist sculptor, Unkei.
The research by the Tokyo National Museum may lead to an important discovery that unravels the mysteries of history.

Nara Prefecture has flourished for more than a thousand years, back when it was called Heijokyo (平城京, Heijo-kyo), and it still has many sightseeing locations, such as Todaiji Temple, Kasuga Shrine (春日大社, Kasuga-taisha), Yakushiji Temple, Taima Temple (当麻寺, Taimadera), and more.
If you’re interested in Buddhist statues or Japanese history in general, we urge you to visit!