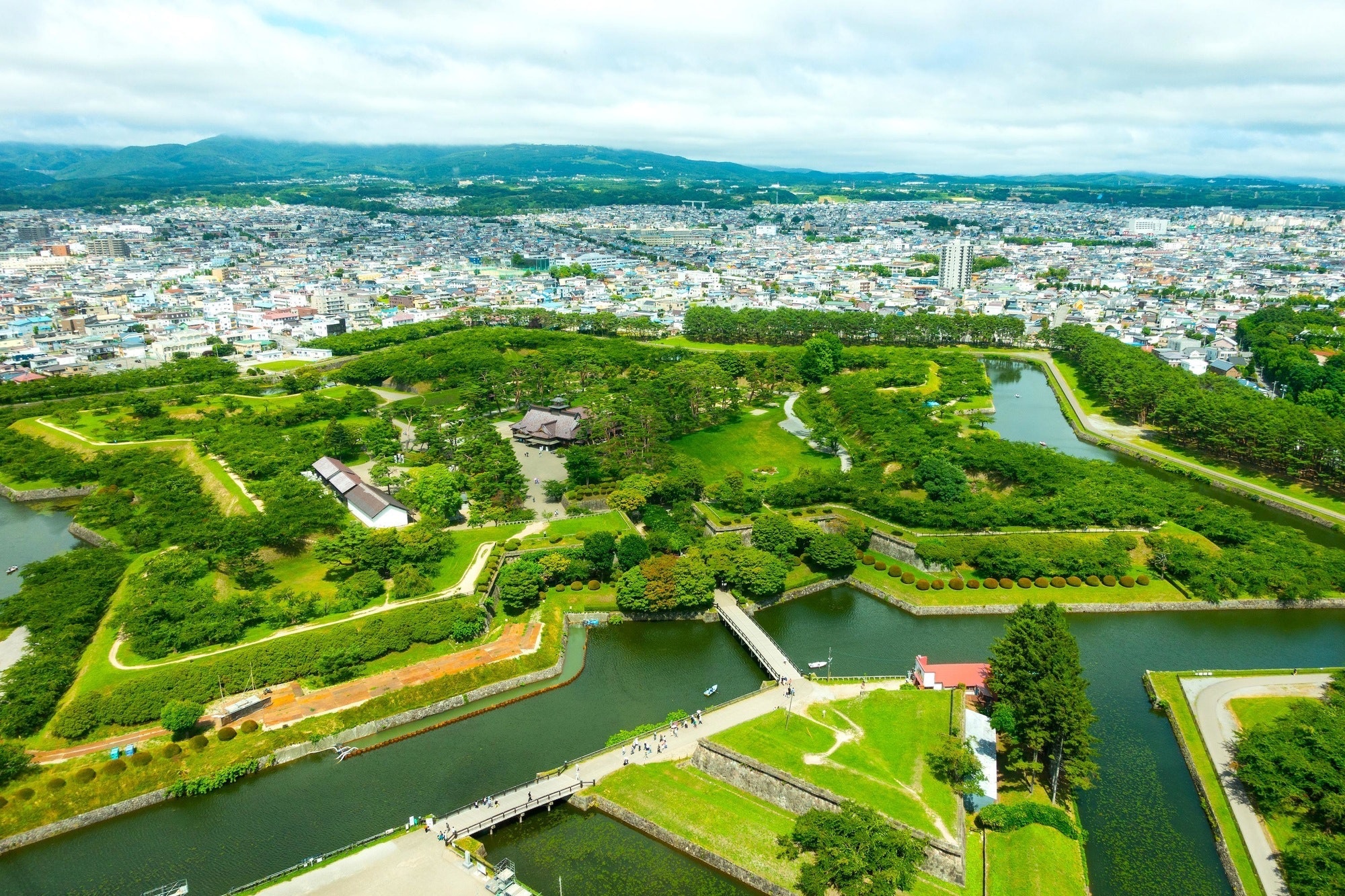 Goryokaku was built by the Tokugawa Shogunate to protect the Hakodate magistrates office, at the end of the Edo period. (1853 – 1868)

The star-shaped Goryokaku is also called Ryohoshiki and it was designed by Takeda Ayasaburo.
This is shown at 1:54 in the video.

Goryokaku was called Kameda yakushodorui and Hakodate Onyakusho during its construction.
It is also known as Yanagino Castle (柳野城, Yanagino-jyo) since there were a lot of willow trees in the area (柳, "yanagi," means willow in Japanese).

The History of Goryokaku

Completed around the time of the Meiji Restoration, Goryokaku was occupied by the former shogunate's forces during the Battle of Hakodate, the final battle of the Boshin War, and became its headquarters.
As you can see from 1:22 in the video, the earthwork, stone walls, and stone monuments still remain.
Goryokaku was also used as parade ground for the army during the Meiji period (1868 to 1912).

Goryokaku has been the setting for many historical events since the end of the Edo period.

In 1988, a TV drama titled "Goryokaku" was also produced.
Goryokaku is a special national historic site, and has been designated a Hokkaido Heritage Site as the "Remains of Goryokaku and the Battle of Hakodate."
It is currently managed by the city of Hakodate as a government-owned property.

The magistrate’s office, which can be seen at 1:47 in the video, was reconstructed in 2010.
You can see the inside, including the main hall, courtyard, and historical records, at 2:33 in the video.

Goryokaku park also hosts a limited time illumination event, so we recommend lining up your visit with it if possible.

Goryokaku, shown in the video, is a great place to enjoy seasonal scenery, including cherry blossoms in the spring, autumn colors in the fall, and snowy scenery in winter.
In addition to Goryokaku, Hakodate also offers other pleasures such as the night view from Mt. Hakodate and eating Hakodate ramen, a specialty of the city.

Incidentally, Tsuruoka Castle (龍岡城) in Saku City, Nagano is also designed in the shape of a star, so be sure to check it out as well!