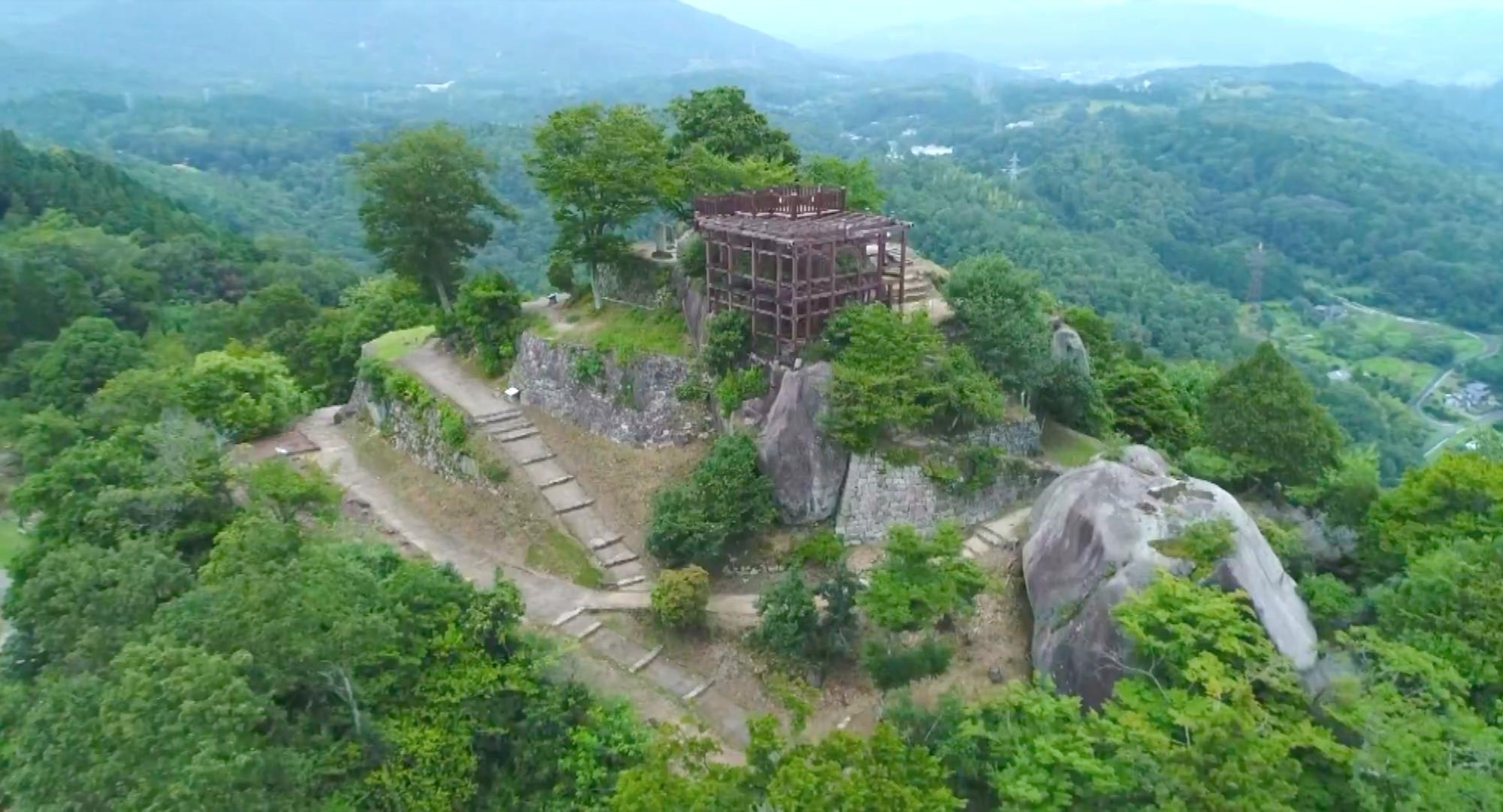 If you watch the video very carefully, you'll feel like you're actually visiting these castle ruins and can learn more about the history of Japan.

A Look at the Iwamura Castle Ruins

The places you see in the video from 0:32 are the Iwamura Castle Ruins and Iwamura Castle Town, located in Ena City.
Lady Otsuya (おつやの方,Otsuya no Kata), Nobunaga's aunt, was the castellan of Iwamura castle.
Iwamura castle was built in the Kamakura period and it has been selected as one of the Top 100 castles in Japan, as well as one of Japan's Top 3 Mountain Castles.
What's amazing about these castle ruins is that the castle itself has 17 original wells, six-layered walls, and a fabulous view of the Taiko Yagura (Drum tower).

Iwamura castle town has 400 years of history involving merchants and old houses.
Also stop by the Iwamura History museum, the Katsukawa House, and Toyasa if you are in the area.
You can check out the CG (Computer Graphic) of Iwamura castle at 1:25.

From 1:54 in the video, Nakatsugawa's Naegi Castle ruins is introduced.
Being on top of a 432 meter hill and across from the Kiso-gawa river by mountain castle bridge, Naegi castle has one of the best views in Gifu.
You can see the 360 degree panoramic view of Kiso-gawa river and other natural views from the observatory.

This castle was constructed in 1526, when Toyama governed the Naegi area from the Warring States Period through the Edo Period.
Naegi castle is also one of Top 100 castles in Japan and has a deep history.
It has many attractive features, such as a stone wall made of natural gigantic rocks, a castle tower, as well as a large watchtower.
You can see stone walls piled up and it looks as though the walls are holding the rocks up.

If you're interested in the history of Nakatsugawa or the legend of Naegi castle, be sure to stop by the Naegi Toyama Historical Museum.
You can also check out the CG video of Naegi castle at 2:43 in the video.

The Mino Kaneyama castle ruins are introduced in the video at 3:14.
The ruins have interesting features, such as cornerstones and broken stone walls.
Kaneyama castle is located on top of Mt. Kojo.
It's 276 meters (~905 ft.) tall with the best view of Kaneyama in Kani.
It was also selected as one of the top 100 castles in Japan and was constructed in 1537.
You can also see the remaining cornerstones used for the building.

Something interesting to note about Mino Kaneyama Castle is its battering ram.
Destroying a castle was the condition of an armistice during Sengoku period.
One of the most famous warriors, Mori Ranmaru, grew up in Kaneyama and became the lord of the castle when he was 18.
Unfortunately, only two months after becoming lord of the castle, he perished with Oda Nobunaga during the Honnoji Incident.

As Kaneyama is Ranmaru Mori’s hometown, there is a place called "Ranmaru Furusato no Mori" where you can see the beautiful view of a canyon.
As Kani City, Gifu is the birthplace of Mitsuhide Akechi, there are several fun events related to Japanese history, such as a stamp collecting event and a Sengoku Period treasure hunting event that take place there.