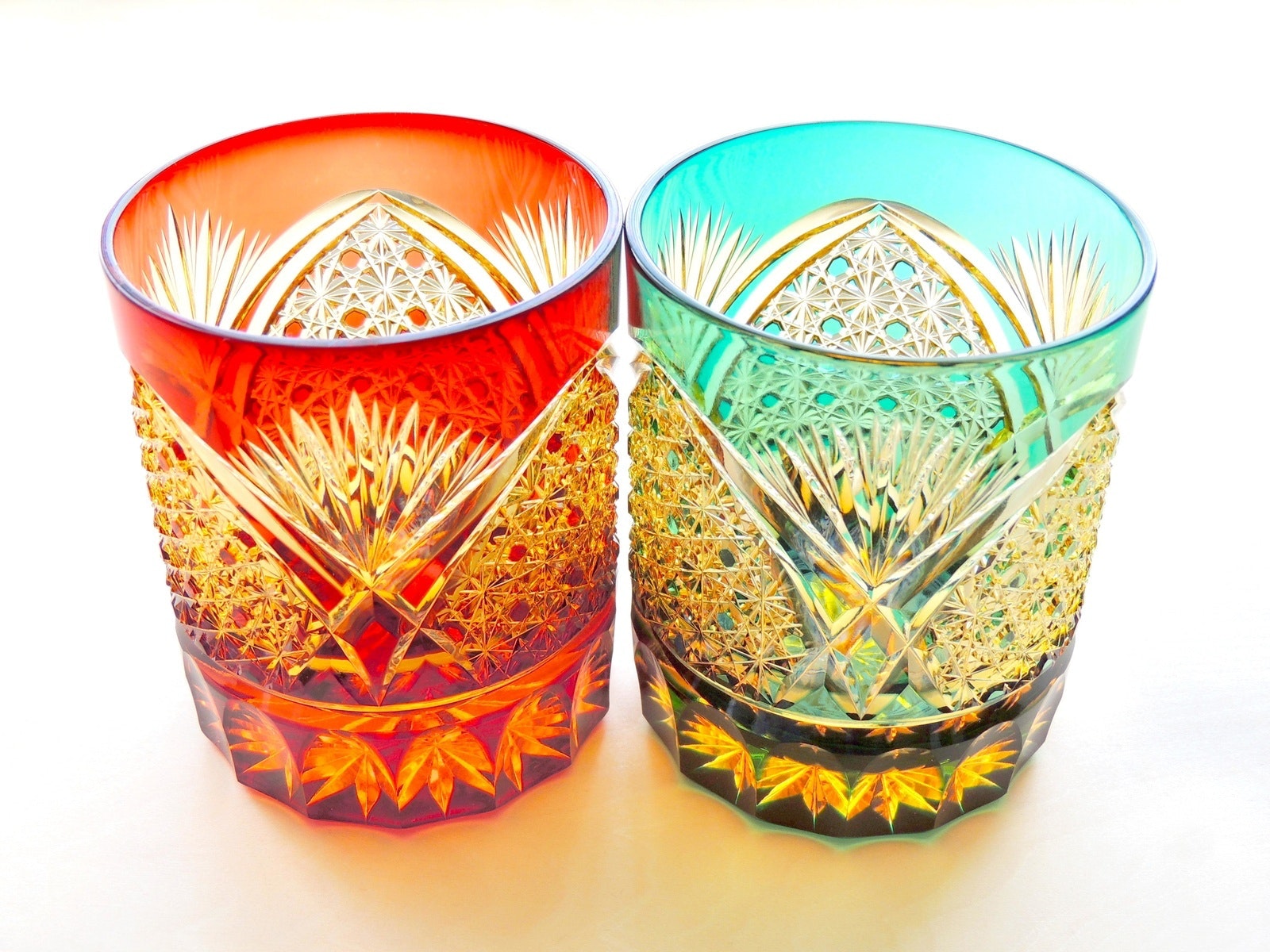 There are a variety of traditional crafts in Japanese culture, including "Edo Kiriko," a highly artistic piece of artwork that shines like a jewel.

This is a video interview with an artisan of the traditional craft "Edo Kiriko," in which he talks about the process of making Edo Kiriko and the traditions of the craft.
This article will briefly introduce Edo Kiriko alongside the video.
Enjoy the beautiful art of Edo Kiriko, which has been handed down in Japan since ancient times.

Edo Kiriko, a traditional craft that has been handed down as part of traditional Japanese culture, is a historic traditional craft with beautiful jewel-like designs cut into glass.
Edo Kiriko is said to have started in the late Edo Period (1750-1860 A.D.) when emery was used to engrave designs on the surface of glass.
It gets its name from the cutting of the glass (切, pronounced "kiri," means cut in Japanese).

From the Taisho Era (1912-1926) to the early Showa period (around 1930), cut glass became popular, and a variety of products, such as tableware, became very popular.
Now, prices vary from a few thousand yen to several tens of thousands of yen for the glass types and several millions of yen for jar types.
Since each piece is hand crafted by an artisan, they are more expensive than regular glasses.

Edo Kiriko is produced using Kagami crystal and soda lime glass.
There are a very rich variety of patterns and colors used in the pieces.
The video also includes an overview of the work in an Edo Kiriko workshop, and rare sketches can be seen at 3:10 in the video.

The patterns show each artisan's sense of craftsmanship, and each artisan creates his or her own tasteful designs.
The reason why many of the pieces are said to be high quality works of art is because of the skill of the artisans that create them.

In the Edo period, the glassware was monochrome, but these days, they use glass with a colored surface layer. This is called "irogise" (color-dressing).
Artisans design the colorful glasses while keeping in mind how they will look when drunk from.
In the video, the Edo Kiriko artisan emphasizes that it's a traditional craft to be enjoyed by the eyes, which is why this part is so important.

Although Edo Kiriko is an ancient Japanese culture, it is not a hereditary system; rather, it is passed down from generation to generation by apprentices who are serious about glass working.
At 5:17 in the video, the artisan in the interview describes how he would like to continue to share his approach to Edo Kiriko with the next generation.

Edo Kiriko - How It's Made

The following is a brief explanation of how Edo Kiriko is made.

1. Waridashi (Indexing)
The glass is placed on a turntable and basic lines are drawn with a magic marker or similar writing instrument. This process is explained by the Edo Kiriko artisan at 3:10 in the video.

2. Arazuri (Rough Cutting)
Making basic cuts that will be the basis for the pattern on the glass.

3. Sanbanzuri (Fine Cutting)
Fine cuts are made into the glass.

4. Sokoishikake (Fine tuning of cuts)
Smooth out the cuts so there are no irregularities.

5. Migaki (Polish)
Polishing the glass to give it a nice shine.

7. Completed
And it's finished!

We highly recommended Edo Kiriko as a souvenir or gift.
They can be purchased online and also at physical stores in Asakusa and Ginza, where you can see them up close and get a better look at their beauty.
"Hanasho," with its main store in Kameido, and the "Sumida Edo Kiriko Museum" in Sumida, are famous for their shops, while the Edo Kiriko Cooperative in Kameido has a showroom where you can view various types of Edo Kiriko.

At the Edo Kiriko classes in Asakusa and Nihonbashi, you can experience the techniques of Edo Kiriko and draw patterns such as cherry blossoms and roses on glass.
You can also learn the artisanal skills at the Edo Kiriko workshop and give a gift full of Japanese culture.

At the Edo Kiriko Exhibition and the Edo Kiriko Museum, you can see many artisanal works of craft.
If you want to see the craftsmanship in person, this is a great place to visit.
You can also buy your favorite pieces as souvenirs.
Like Edo Kiriko, "Satsuma-Kiriko" is another popular type of cut glass.
These pieces are more suitable for ornamental purposes than Edo Kiriko.

This article introduced the history of Edo Kiriko, a traditional craft in which Japanese craftsmanship truly shines.
We recommend getting a pair of Edo Kiriko glasses that you can use for a variety of occassions.
Due to the delicate nature of Edo Kiriko glass, they must be cared for more carefully than normal glasses.

This video talks about the uncompromising dedication of Edo Kiriko artisans and the appeal of Edo Kiriko, which cannot be described in such a short amount of time.
Please enjoy the video and learning about the depth of the ancient Japanese craft.