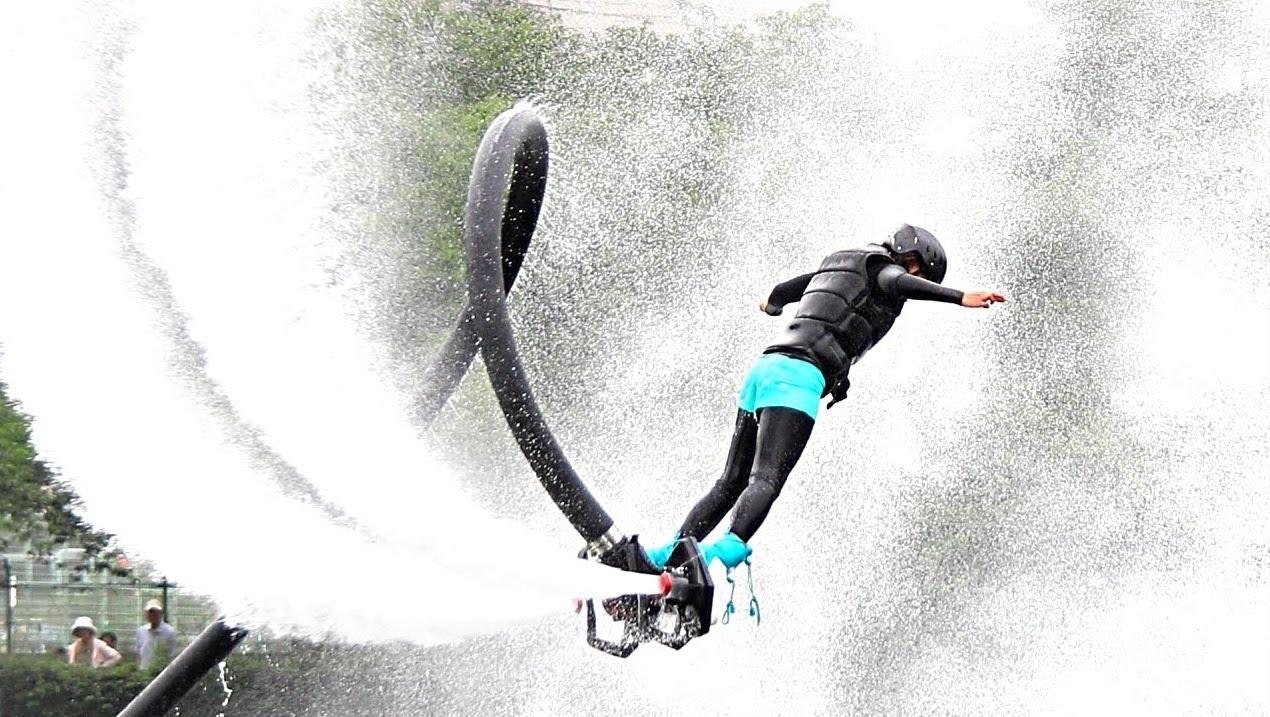 This is the promotion video called “Japan Flyboard Championship 2018（フライボード選手権2018 & フライボードガール～Flyboard Japan Championship～）” .
As you can see from the video (0:07) , a new device called a "fly-board", that soars through the air using water pressure, is attracting a lot of attention as a new marine sport.

Surprisingly, there's also a Flyboard World Championship. Flying through the air with all that freedom looks like a blast!
You won't be able to keep your eyes off this new marine sport!

Flyboarding is a marine sport where a person flies from the surface of the water by using a hover-boardthat connects between a water-jet and a hose on the rider's feet.
When water bursts forth from the exhaust of the personal watercraft, jets are sprayed from under the board through a hose, allowing the wearer to fly.

The maximum flying height is about 9 meters (30 ft.).
But it's possible to do a variety of flips and tricks with practice.
You can see a lot of different tricks such as the back-flips in this video (0:23).

The 2018 Japan Flyboard Championship was held at the Hachikenyahama (八軒家浜: Hachikenyahama) in Tenma, Osaka City Osaka in May, 2018.
Entrants competed with each other to perform the most impressive tricks in a set time limit.

As you can see in the video at 1:40, the performances of female competitors, called “Flyboard Girls”, also became famous in this championship.
Besides the Japan Flyboard Championship, there's also the Flyboard World Championship as well. People from all over the world enjoy flyboarding.

As you may know, flyboards are used for many shows such as the ones at Tokyo Disney Sea.

Wanna Give It a Shot?

Recently, trial lessons have become available seaside or at lakes such as Lake Yamana ( 山中湖：Yamanakako) or Lake Kawaguchi (河口湖:Kawaguchiko).
There is another activity similar to flyboarding where you can fly using a jet pack.
This can be seen at 3:13 in the video.

"Do I need to buy something in order to try it out?" Don’t worry about that, necessary items such as a wet suits or life jackets are available for rent.
Don't worry about being a beginner either. Instructors give great guidance so there's nothing to worry about.
The average lesson fee is about 6000 yen (~$55 USD). It's definitely worth trying at least once!

Summary of the Japan Flyboard Championship

Flyboarding is not a major marine sport yet, but it has been attracting a lot of attention due to the nature of the sport's aerial freedom.

If this article has you interested in flyboarding, be sure to give it a shot!