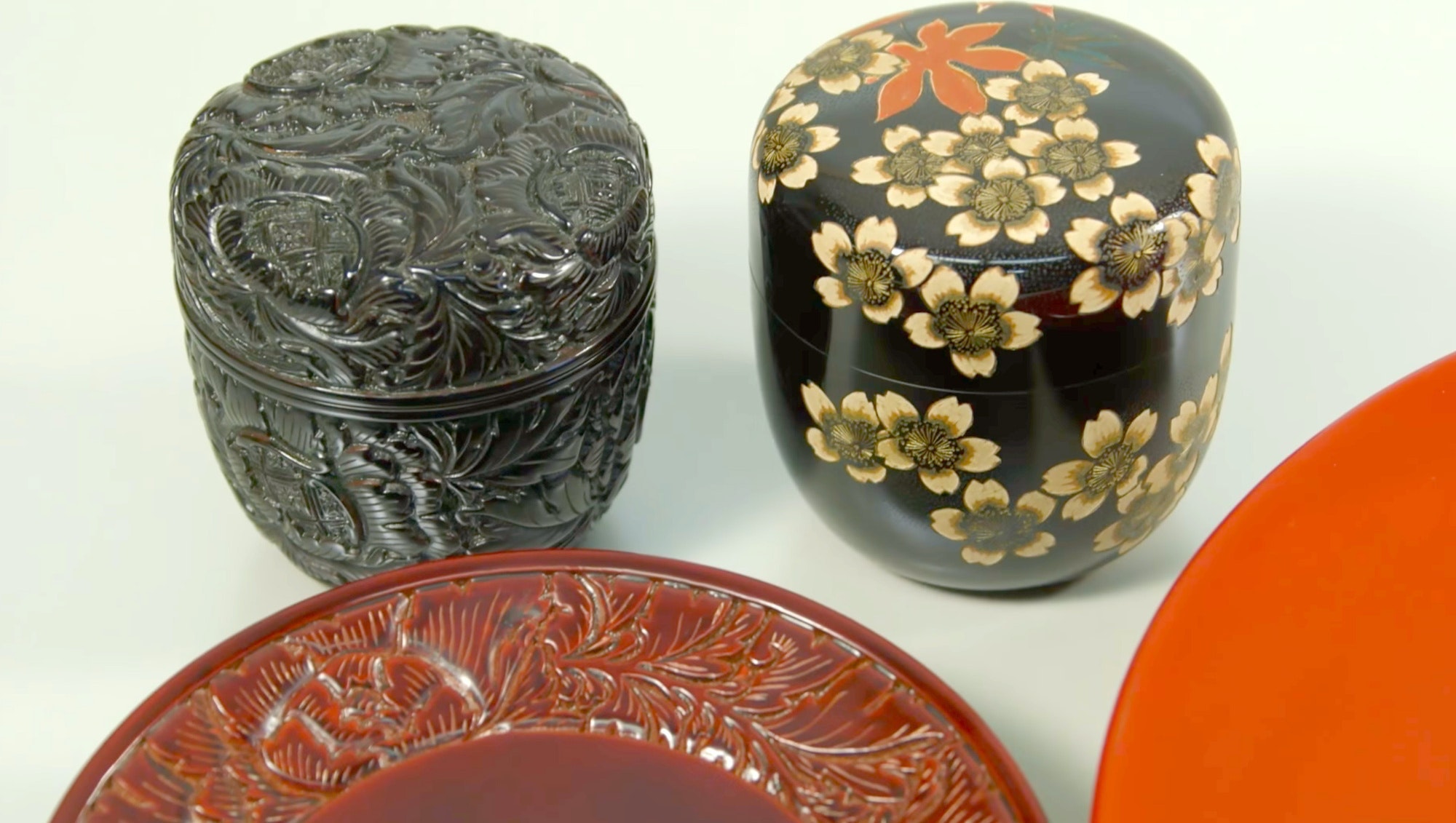 Murakami Kibori Lacquerware was introduced by a lacquer maker in Kyoto at the beginning of the 15th century as a technique for painting lacquer on wood carvings.
This was done in imitation of Chinese tsuishu (lacquerware), and the technique was introduced to the Murakami region after a temple was built there.
The technique was first learned by the carpenters who built the temple, after which it was was passed on to samurai duringEdo period (1603-1868), then to the townspeople, and finally to present day Japan.
In this article, we'll go over Murakami Kibori Lacquerware, a traditional lacquer technique of Niigata prefecture.

Along with the video, we'll be introducing some of the steps in the 18 to 20 step process that craftsmen use to make Murakami Kibori Lacquerware by hand.

1. Sketching (0:40~)
This serves as a guide for engraving and is drawn directly on the wooden plate.
Drawing with a brush that can express stronger and weaker lines is fundamental to the process.

2. Carving (0:47~)
Wood carving is performed by using a chisel called an "Urajiro" on the sketch drawn in step 1.
There are two types of carvings, the two-dimensional Shishiai-bori and three-dimensional Hikisage-bori.
In the video, the craftsman explains that the most important thing is to carve the wood as though it were a living thing, making the most of the different grains of each tree.

3. Sanding (1:18~)
This is the process of sanding the roughness of the blade marks with sandpaper (in the old days, horsetail was used) to give roundness and softness to the carving.
This makes the work even more three-dimensional.

4. Hardening
This involves adding a small amount of red husks to raw lacquer and using a brush to soak the entire wood with lacquer.

This is also an important step because it is done to solidify the foundation of making a durable Tsuishu.

5. Smoothing (1:29)
In the important undercoating process to make durable lacquerware, raw lacquer and polishing powder are mixed and applied 2-3 times to the plain areas without engravings.

6. Polishing
The process of water-polishing the coated surface using an imperial whetstone.
This is done with applying rust lacquer and is repeated 2-3 times and the lacquerware is allowed to dry for at least a few days after the rust lacquering process.

7. Middle Coating (1:40~)
The process of dabbing on lacquer on with a pad or fingertip and then finishing painting with a brush so that the engraved pattern is not filled with lacquer.
Generally, oil-free refined lacquer is used for this.

8. Polishing the Middle Coating
It is a process of carefully water-sanding the surface with a fine-grained natural stone whetstone called Murakami whetstone or a water file.

9. Top Coating (2:06~)
Brightly colored vermilion lacquer is dabbed on with a pad or fingertip and finished painting using a brush so as not to fill the carved patterns similar to the intermediate coat.

10. Matt Finishing (2:23~)
An important process for polishing the top-coated glossy surface with charcoal or polishing powder evenly with water to make it a deep and calm-looking product.

11. Engraving (2:44~)
The designs are carved once more.
This fine carving is made to supplement the earlier wood carving with a fine-pointed triangular chisel.
Expressions such as leaf veins, feathers, and mountain surfaces are re-engraved.

12. Finishing (3:06~)
This step involves adding a small amount of red iron oxide to high-quality raw lacquer and rubbing it with a brush over the entire vessel.
The matte surface is moist and firm, and this completes the production process of Murakami Kibori Tsuishu.

The beautiful, finished product, like a work of art, can be seen from 3:23 in the video.
These unique techniques have been designated Intangible Cultural Properties of Niigata Prefecture and Murakami Kibori Lacquerware was designated a National Traditional Craft.

Murakami Kibori Lacquerware, a traditional craft that has been handed down since the Heian period, includes products such as jubako (stacked boxes), sake cups, tea ware, flower ware, confectionery ware, sake ware, etc. that are all great for celebrations, souvenirs, and gifts.

Murakami Kibori Lacquerware is a testament to the living history of Japan, through which you can enjoy the techniques that craftsmen have refined and passed down since ancient times.