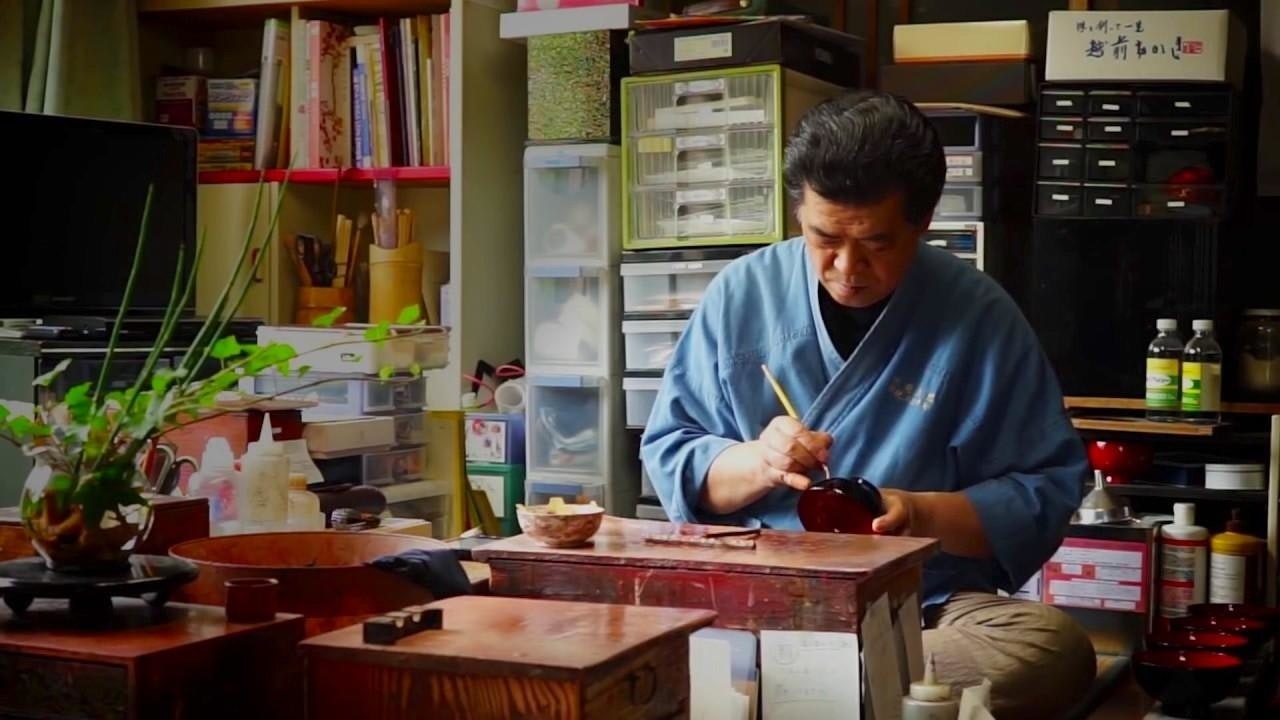 Echizen lacquerware is mainly produced in the Kawada region in Sabae city.
It has an air of Japanese culture and is also very beautiful.
This article will introduce how it's made, as well as some of the different products.
Be sure to follow along with the video and find your favorite!

Echizen lacquerware has a long history, with origins dating back to the Asuka Period (593 to 710) more than 1400 years ago.
It is said that a painter, who was asked to repaint the imperial crown by the emperor, also offered a black lacquer bowl to the emperor with it, and the emperor was so impressed by the work that he helped promote its growth.
After the Edo Period, (1603 to 1868) many craftsmen were thriving around Sabae city in Fukui prefecture, and their technique gradually spread throughout Japan.

The Traditional Craft, Echizen Lacquerware: How Its Made

Echizen lacquerware uses a traditional technique that has been passed down since ancient times. The technique requires various craftsmen to be involved in the production process.

1. Lacquering (漆塗り, Urushi nuri) - (0:25)
The wood is carved out and then lacquered with two or three coats of lacquer.

2. Gold Inlaying (沈金, Chinkin)- (1:25)
The surface is carved and the gold foil is applied.
The craftsman in the video says that the gold foil shines beautiful, like a mirror, when the chase is clear.

3. Gold lacquering (蒔絵, Makie) - (2:05)
This process involves sprinkling gold dust over the lacquer. This process must be done before the lacquer is dry.
According to the craftsman, the drying time of the lacquer varies depending on the humidity of each day.

The Japanese method of gold lacquering has been passed down since ancient times. Lacquerware made by first-rate artisans, are very beautiful pieces of artwork. Echizen lacquerware is elegant and long-lasting.

Get Your Own High-Quality Echizen Lacquerware

You can purchase high-quality, hand crafted Echizen lacquerware at Shikki Sajibe.
There are many workshops that produce and distribute Echizen lacquerware in Sabae city.
They sell everyday goods, such as bowls, chopsticks, tumblers, coffee cups, saucers, plates, lunch boxes, and more.
In recent years, lacquerware manufacturing techniques have improved, and products that can be used in microwave ovens and dishwashers are on the rise.

You can see Echizen lacquerware products at 3:09 in the video.
There are kitchen knives, clocks, and so on, all of which are incredibly beautiful.
Echizen lacquerware can also be purchased online, so if you're interested, be sure to check out some of the online retailers.
The most famous Echizen lacquerware shop is Echizen Sikki Qtarou; It has been open for 94 years.
In 1981 the founder Soumei Kyutaro, then 83 years old, received the fifth class Order of the Sacred Treasure award.