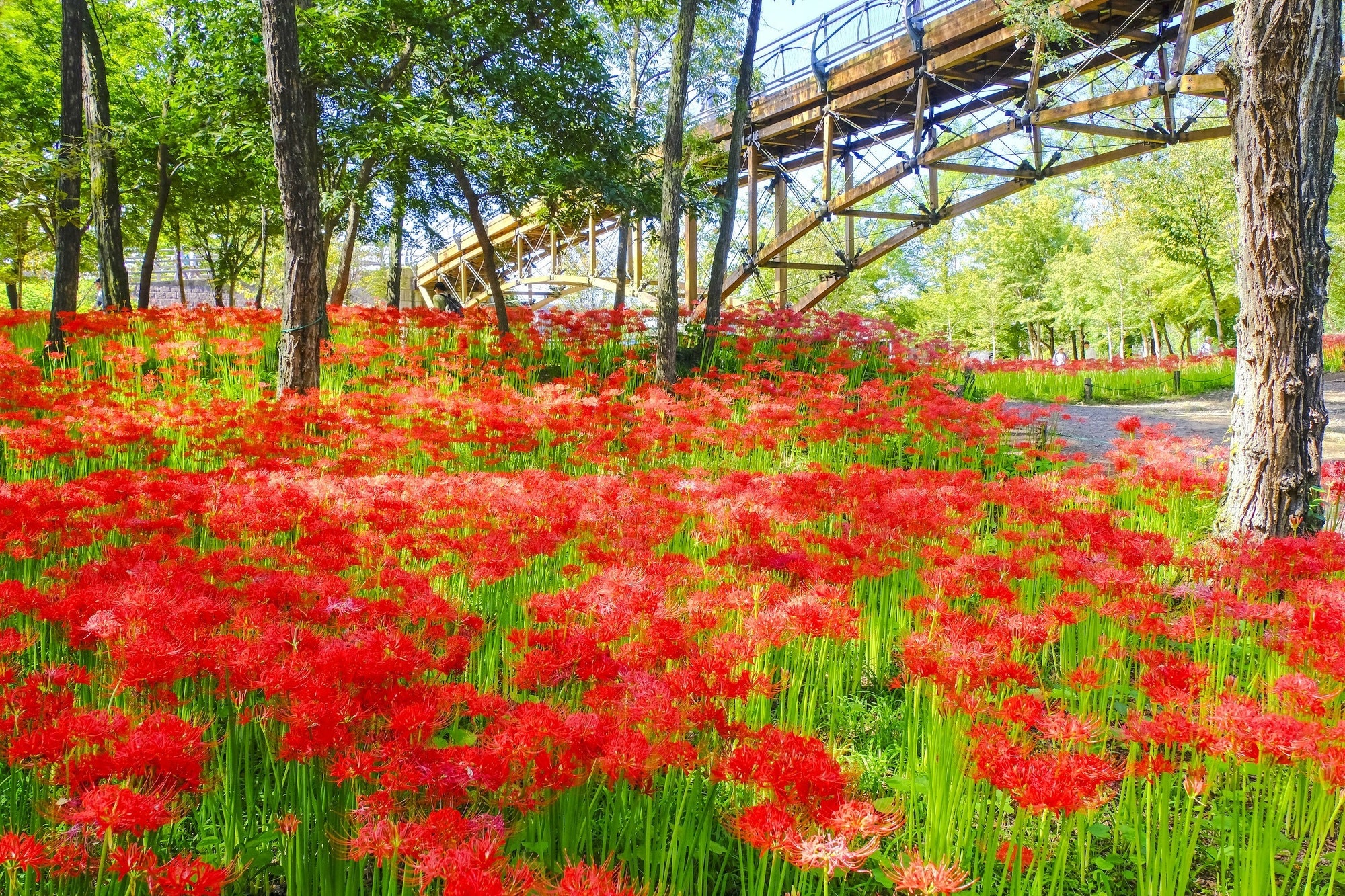 The Red Spider Lily Festival, held every year from mid-September to early October at Kinchakuda Manjushage Park in Hidaka, Saitama, is an event to admire the beautifully blooming spider lilies in Kinchakuda Manjushage Park.
In this article, we'll introduce tourist information, such as transportation access and the best time to see the Red Spider Lily Festival.

From 0:46 in the video, you can see the greatest display of red spider lilies in Japan.
The sight of so many beautiful spider lilies blooming in one location is truly breathtaking.

Kinchakuda, A Famous Sightseeing Location for Flowers in Saitama Prefecture

Kinchakuda, located in Hidaka, Saitama, in Japan's Kanto region, is a flat land spanning roughly 54 acres, the equivalent of about 4.7 Tokyo Domes.
The Komagawa River also crosses through this area.
Kinchakuda is also popular as a tourist destination where visitors can observe rape blossoms in spring and spider lilies and cosmos in autumn.

The red spider lilies of Kinchakuda creates one of the largest blooming areas in Japan with approximately 5 million flowers, and around 300,000 visitors when the flowers are in bloom.
Access to Kinchakuda Manjushage Park are, if coming by train, about a 15-minute walk from Koma Station on the Seibu Ikebukuro Line.
There is a paid parking lot available as well, but the surrounding roads can be quite crowded when the spider lilies are in bloom, so we highly recommend visiting the park by train.

Dates for the Red Spider Lily Festival vary depending on the bloom each year, but it is generally held from mid-September to early October.
During this period, stalls, including food vendors, will also be set up around the area.
Admission to Kinchakuda Manjushage Park is 300 yen.

You can see spider lilies blooming as far as the eye can see from 0:27 in the video.
The number one spider lily location in Japan awaits you!

Summary of the Red Spider Lily Festival at Kinchakuda in Hidaka, Saitama

This video introduces the best spider lily blooming area in Japan.
The images in the video are incredibly beautiful, so please enjoy the scenery of Kinchakuda, a famous place of flowers in Japan.

In this article, we introduced tourist information, including transportation access and dates for the Red Spider Lily Festival of Saitama Prefecture.
We hope this article has you interested in seeing the beautiful natural scenery of Saitama!