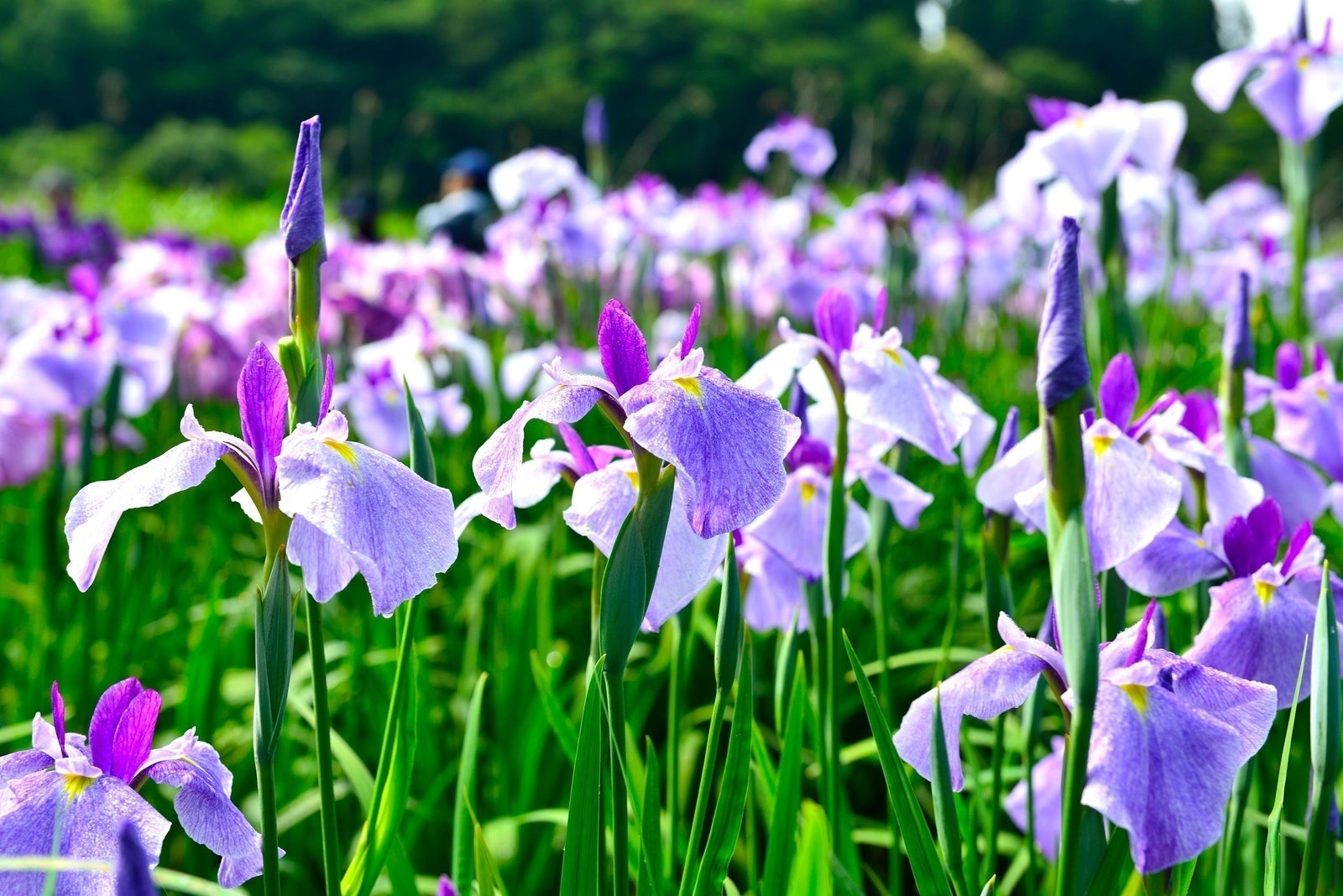 In early summer, Daianzenji temple is beautifully surrounded by blossoming azaleas, hydrangeas and roses.
The temple is popular for the Japanese Irises that grow there.
Approximately 10,000 Japanese irises cover the grounds here and the sight attracts many tourists.
Every year in June, the Iris Festival is held at Daianzenji temple and the area is bustling with tourists and visitors.
Feel the cool summer breeze on your face as you walk around the grounds, taking in the spectacular Japanese scenery.

Throughout this video we'll introduce to you, via drone imagery, the Iris Festival, a festival which takes place at Daianzenji Temple in Fukui prefecture.
The purple, white and yellow irises covering the grounds at Mt. Bansho's Daianzenji Temple tell of the arrival of summer.

Check Out Daianzenji Temple and See the Beautiful Japanese Irises!

Japanese Irises are perennials that bloom during the rainy season in Japan.
It is thought that Japanese Irises were already being cultivated during the Edo period (1603-1868) and there are still several traditional varieties grown today: Ise, Higo, Edo and Nagai are a few of these varieties.
We recommend having a look and comparing the different varieties of Japanese Irises on show at the Iris Festival.
The history attached to the Japanese Iris adds to its charm.

At the Iris Festival, you can enjoy a spectacular view of the temple grounds covered in what looks like a carpet of Japanese Irises.
It's the perfect spot to take pictures to share on Instagram!
Throughout the video you can see some amazing shots of Japanese Irises, however, the images from 0:53 are particularly breathtaking.

Not only is Daianzenji Temple well known for its Iris Festival, it's also famous for being the resting place of the Matsudaira clan (松平家, Matsudairake). In 1658, the fourth generation feudal lord Matsudaira Mitsumichi converted to Buddhism and had this temple erected.
As a place of historical significance, the temple building was designated an important cultural asset of Japan.

In addition, some ancient and valuable works of art are kept here, such as the Arhat (羅漢図, Rakanzu) and Portuguese Ship (南蛮船風俗図, Nanbansenfuuzokuzu) paintings.
We highly recommend trying Buddhist Shojinryouri cuisine, taking part in a Buddhist sermon or Zen meditation when you visit Daianzenji Temple.
Don't forget your seal stamp when visiting!

Summary of the Iris Festival at Daianzenji Temple, Fukui

Daianzenji Temple, with approximately 10,000 Japanese Irises and many other flower varieties blossoming on its grounds, is truly a temple of flowers.
There is free parking on site for those travelling by car, so you can easily come and take part in the festival!
We hope you enjoy taking a closer look at the festival in this video.

We're sure that after watching this video you will be eager to come and take part in the Iris Festival!
The event is held every year in the second week of June, details of the exact date will be posted online on the official website.
We hope to see you there!