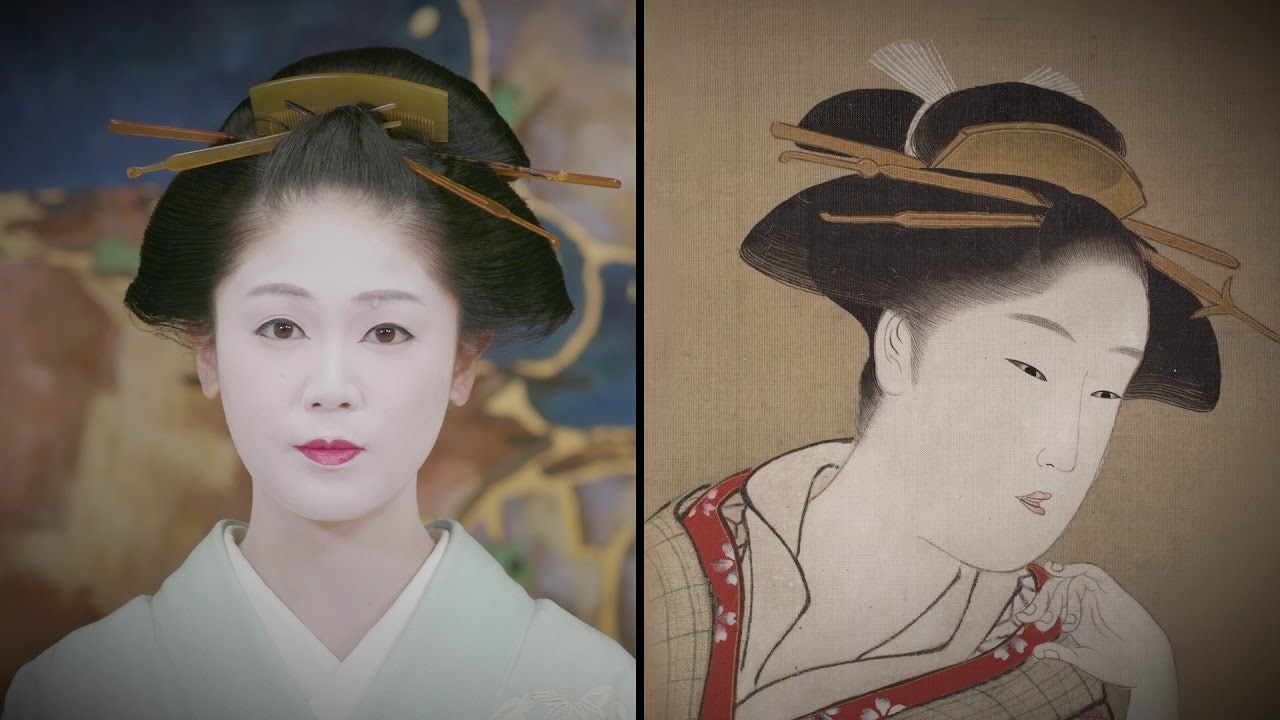 This video, titled "Recreating Ukiyo-e Hairstyles," was created by "The Art Institute of Chicago."

From 0:27 in the video, professional hairdresser Tomiko Minami appears. She is highly skilled at recreating the hairstyles portrayed in ukiyo-e prints of the Edo Period.
Ukiyo-e prints were created by Edo-era artists such as the famous Katsushika Hokusai (葛飾北斎).
The beautiful renditions of women in ukiyo-e prints have gained admiration not only in Japan but also worldwide.

As seen in the video, hairdressers like Tomiko Minami use the techniques of old to bring ukiyo-e hairstyles to life in the present day.

The video introduces Tomiko Minami of Minami Hairdressing.
She is part of a group of Japanese hairdressers known as "yusoku biyoshi" (有職美容師), who specialize in studying and maintaining historical traditions of the imperial court and samurai families with regards to hair and clothing.
Tomiko Minami is not only proficient in traditional Japanese hairstyles, but also well-versed in the ornaments and clothing styles of each era.
She is even responsible for hairdressing and garments at the Ise Jingu Festival (伊勢神宮祭).

At the Aoi Matsuri (葵祭) and the Heian Shrine (平安神宮) Jidai Matsuri, she is in charge of more than 150 different types of hairstyles.
Her recreations of ukiyo-e hairstyles are extremely detailed and intricate.
With participants strolling around with their beautiful hairdos and traditional garments, these festivals of Kyoto are a wonderful sight, bringing to life the atmosphere of times past.

During the early Edo Period, people generally let their hair flow freely without tying it up.
However, from the mid-Edo Period, hairstyles, such as those seen in ukiyo-e prints, began to increase in popularity.
There were styles such as the the kamome tabo (鴎髱, Seagull's Tail), the yoko-hyogo (横兵庫, Butterfly), and the torobin (燈籠鬢, Lantern Locks) resembling a traditional lantern.
In the later Edo and Bakumatsu Periods, elaborate hairstyles ,especially for high-ranking courtesans, were created as well.

The hairdressers skillfully make use of combs and hairpins to create traditional Japanese hairstyles, such as suberakashi (垂髪), as well as the shimada and katsuyama styles favored by geisha and maiko.
At 1:37, 3:19, and 5:02 in the video, you can see the finished hairstyles carefully dressed by the talented hairdresser.

The hairdressers shown in this video make use of techniques used in the Edo Period to accurately recreate the hairstyles of that period.
Their incredible skill has gained attention from around the world.

Be sure to take a look at the video and take in the skills of the hairdressers and understand the depth of Japanese culture!