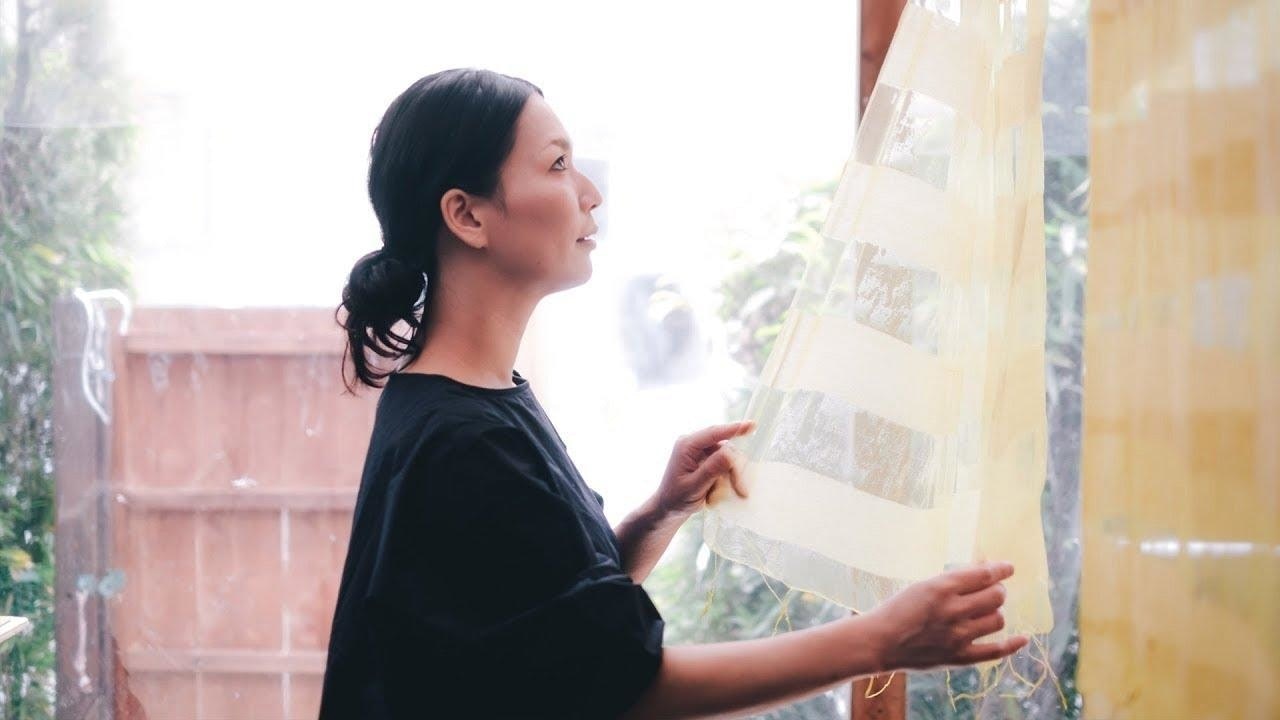 Dyeing and weaving originated in China, India, Rome and Greece, and was introduced to Japan in the 3rd century AD.

In the video (2:35), Yoshioka says that the technique is mentioned in the old text "Manyoshu" and the "Engishiki" (a Japanese book about laws and customs) which were both completed during the Heian period (794-1185).

The Engishiki documented the ancient dyeing recipes.
Having been designated as Intangible Cultural Property, dyeing and weaving technique and textiles such as Kimono and Obi are the important traditional crafts.

In this video, female artisan Sarasa Yoshioka, talks about the history of dyeing, a traditional Japanese craft, and her passion for it.
It also captures her superior artisanal skills.

There are two main types of dyeing and weaving:
Sakizome- in which yarns are dyed first and then woven, and Atozome- in which the cloth is dyed after it is woven. The former is represented by these Kimono makers in the form of Yu-kitsumugi, Nishijin, and Nishikiori.
Examples of the latter include Kyo-yu-zen and Kagayu-zen which are known for the splendid picturesque patterns.

The Methods and Materials of Traditional Japanese Dyeing and Weaving

Colors are most commonly extracted from plant sources such as roots, tree bark, and nuts.
Yoshioka says the plants that are hard to grow are typically supplied by contracted experts (2:08).
Indigo dye is one of the oldest and most common dyes to be used for textile dying.
Since Indigo has antibacterial and insect repellent effects, it is thought that people wore indigo dyed clothing to keep insects and infections away.

The Role of Dyers and Their Delicate Craftsmanship

The Heian period (794-1185) was the peak of the Japanese Imperial court and aristocratic culture.
The garments wore by the upper classes were made by dyeing and weaving artisans.
For this reason, dye artisans at that time held a high position in Japan's hierarchical society.
The garments wore by the present day Emperor and Empress in the court functions are still made using this traditional technique.

These formal court dresses, such as Sokutai and Junihitoe, can only be handmade since the delicate weaving cannot be done by machines.
Automated weaving machines were imported to Japan during the Meiji period (1868-1912) and silk textiles were designated as a main industry.
Being inferior to the Great Powers in the heavy industries, Japan relied on the techniques of the dyeing and weaving artisans to acquire foreign currency, with the aim of becoming a member of the Great Powers.

The Future of Dyeing and Weaving

The dyeing and weaving industry, which is both time and labor intensive, has been on the decline for quite some time. Today, however, the increasing number of universities or fashion design schools integrate it in the school curriculum in order to prevent the traditional craft from dying out.

The number of young people apprenticed to a dyeing and weaving artisan is also increasing little by little.
Kimono, obi, tenugui and other textile products are popular as souvenirs of Japan's overseas markets, and the more opportunities there are for dyed fabric weavers to play an active role, the more likely they are to pass on this traditional Japanese craft to future generations.

Traditional Dyeing and Weaving: An Academic Point of View

You may imagine that dyeing and weaving is mainly based on tough outdoor work, but it is also an embodiment of highly developed chemistry.

As seen in the video, the majority of plant dyes requires the use of mordant such as vinegar or natural alum to enhance and fix the color in the textile fibers.
In other words, dyers obtain the brilliant colors through chemical reactions between the materials.
Dye artisans imagine the final product before they even begin.
"The color we want to achieve is decided from the beginning, and we use our experience and sense to adjust the color closer to the desired color" says Yoshioka (7:05).

In order to achieve the client's desired color, the weavers use all of their wisdom as artisans.
Yoshioka says that obtaining the color desired by clients is "a mission given to dye artisans" (7:47).

It is not only fabrics, yarns of silk, linen and cotton she dyes, but also washi papers.
Every year, she spends the winter months dyeing papers to dedicate to the Buddhist ceremony held at To-daiji Temple in Nara prefecture (5:58).

The video features a dyeing and weaving artisan, Sarasa Yoshioka who works in the Kyoto-based atelier "Somenotsukasa Yoshioka."
Sticking to the traditions, the atelier uses only plants dyes and the traditional dyeing method.
Dyestuffs are soaked and simmered in the pure spring water of Fushimi (a district in Kyoto), pumped up from 100 meters underground. In this method, a variety of colors and shades can be obtained with the same dye, and the delicacy of dyed fabric is beautiful.

In this article, we introduced the history of dyeing, its production methods, origins, and the raw materials used, alongside the interview with craftswoman, Sarasa Yoshioka.
In the video, you can see and hear more of what she has to say and also take a look at her technique. Be sure to check it out!