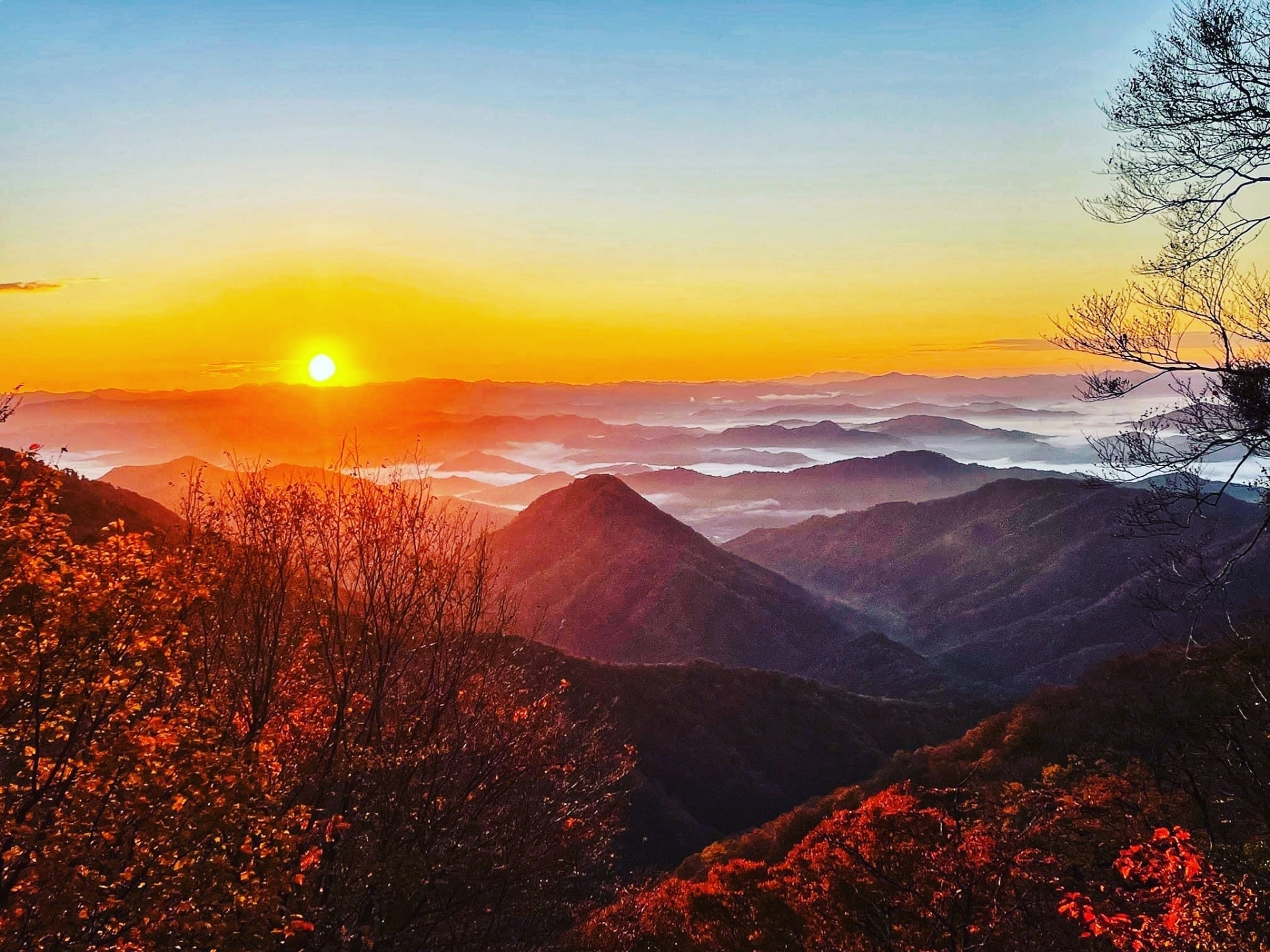 Aerial Footage of Autumn Leaves, a Sea of Clouds, and Snow on Mt. Oe: Video Introduction

This video, titled "Autumn Leaves, a Sea of Clouds, and Snow Landscapes on Mt. Oe via Aerial Drone Footage 4K" (紅葉と雲海、雪の大江山空撮 Drone aerial 4K shooting of autumn leaves, sea of clouds, and Mt. Oe with snow makeup), was uploaded by "Office WADA."
It features aerial drone photography of the Oe Mountains in Miyazu, Kyoto! You can see the seasonal changes of the mountains from Miyazu Bay to Amanohashidate and Nariaiji Temple in 3 minutes and 25 seconds. Enjoy the spectacular autumn leaves and sea of clouds, and the snowy mountains in winter, some of the most spectacular views of the Oe Mountains.

The Fascinating Mt. Oe – Legends of Demons and a Sea of Clouds. The Model for Demon Slayer?

The Oe Mountains are mountain range consisting of four mountains, Nabezuka, Hatogatake, Senjogatake, and Akaishigatake, located in Fukuchiyama, Yosano, and Miyazu, Kyoto, in Japan's Kansai region. They sit at an elevation of 832.5 meters.

"The Song of the Oe Mountains" is a story about the young Koshikibu no Naishi, a master waka poet who appears in the Ogura Hyakunin Isshu and daughter of Izumi Shikibu, composing a poem so skillfully that Fujiwara no Sadayori, another master waka poet, makes fun of her, asking, "Did your mother write this poem for you?" The song tells of Koshikibu no Naishi beating Fujiwara no Sadayori in a battle of words.

The Oe Mountains have attracted a lot of attention due to the popularity of the hit anime Demon Slayer. In the fall, the mountain is known for its sea of clouds, where fog rolls in between the mountains.

Onitake Inari Shrine, located at the 8th station of the Oe Mountains and accessible by car, is also a spot with a superb view of the sea of clouds, and is popular as a picturesque spot for photographers and instagrammers.

Sightseeing & Spectacular Views on Mt. Oe! When to See the Autumn Leaves and Sea of Clouds

A sea of clouds forms between mountains in the early morning when there is a large temperature difference from that of the previous day. It's a special sight because it can only be seen at certain times of day, but it is difficult to climb mountains early in the morning. Many people wish to view the sea of clouds from a place that is easily accessible by car, and as a matter of fact, there is such a place on Mt. Oe.

That location is Onitake Inari Shrine, which is located at the 8th station of the Oe Mountains. Located at an elevation of 640 meters, this is a great place to view the surrounding mountains and sea of clouds. The area surrounding Onitake Inari Shrine is a rare primeval beech forest, where visitors can enjoy a vast sea of clouds and autumn leaves at the same time. It's the perfect spots for taking photos!

Another way to enjoy sightseeing in the Oe Mountains is mountain climbing and hiking. The Oe Mountains consists of four mountains: Nabezuka, Hatogatake, Senjogatake, and Akaishigatake, and can be enjoyed by both casual hikers and advanced climbers alike.

The Nabezuka course alone or the two-mountain course from Hatogatake to Senjogatake can be completed in a half-day hiking tour. Alternatively, you can challenge three or more mountains for a full-scale mountaineering expedition.

We also recommend staying at a hotel in Fukuchiyama and enjoying your time over several days to carefully enjoy the spectacular views of the mountains while climbing. If you're not confident in your mountain climbing/hiking skills you can always ask for a guide. We recommend them because they can help you discover things that amateur climbers tend to overlook and also ensure your safety.

Here we'll introduce you to the legends of demons (oni) in the Oe Mountains, which have been passed down for generations.

In the mid-Heian period (794-1185 A.D.), a terrifying oni named Shuten-doji lived in the Oe Mountains. Originally an exceptionally attractive human, he became a rampaging demon who ate people because of a grudge. This oni was also a great drunkard who could not be defeated by human powers alone.

Minamoto no Yorimitsu was ordered to defeat this demon by making it drink sacred sake that was poisonous to demons. It's said that the demon Shuten Doji, who was "a demon consumed by alcohol," cursed Yorimitsu bitterly, calling him a coward, before he was beheaded.

Besides the legend of Shuten-doji, there are two more legends of demons that have survived on Mt. Oe. Onitake Inari Shrine, located at the 8th station, is called the "home of demons."

For those who wish to learn more, we recommend visiting the Japanese Oni Exchange Museum. The museum exhibits everything from the demons of Setsubun to legends of demons. It's a great way to enjoy the local culture of the Oe Mountains.

Summary of Autumn Leaves and the Sea of Clouds at Mt. Oe

If you're traveling to Mt. Oe to enjoy the autumn leaves and sea of clouds, we recommend visiting Onitake Inari Shrine in the early morning during November if you have the chance. On the way to Onitake Inari Shrine at the 8th station of the Oe Mountains from Prefectural Road No. 9 is the Village of Shuten-doji. This facility is also equipped with everything from tennis courts to barbecue houses, campgrounds, and lodges.

If you're planning to stay near Mt. Oe to view the sea of clouds and autumn leaves, consider using the accommodations at the Village of Shuten-doji, which offers good access to Onitake Inari Shrine.

SAKUYOU
A mom of two children who grew up in Tokyo and loves motorcycles, traveling, and kimono.
SUBSCRIBE