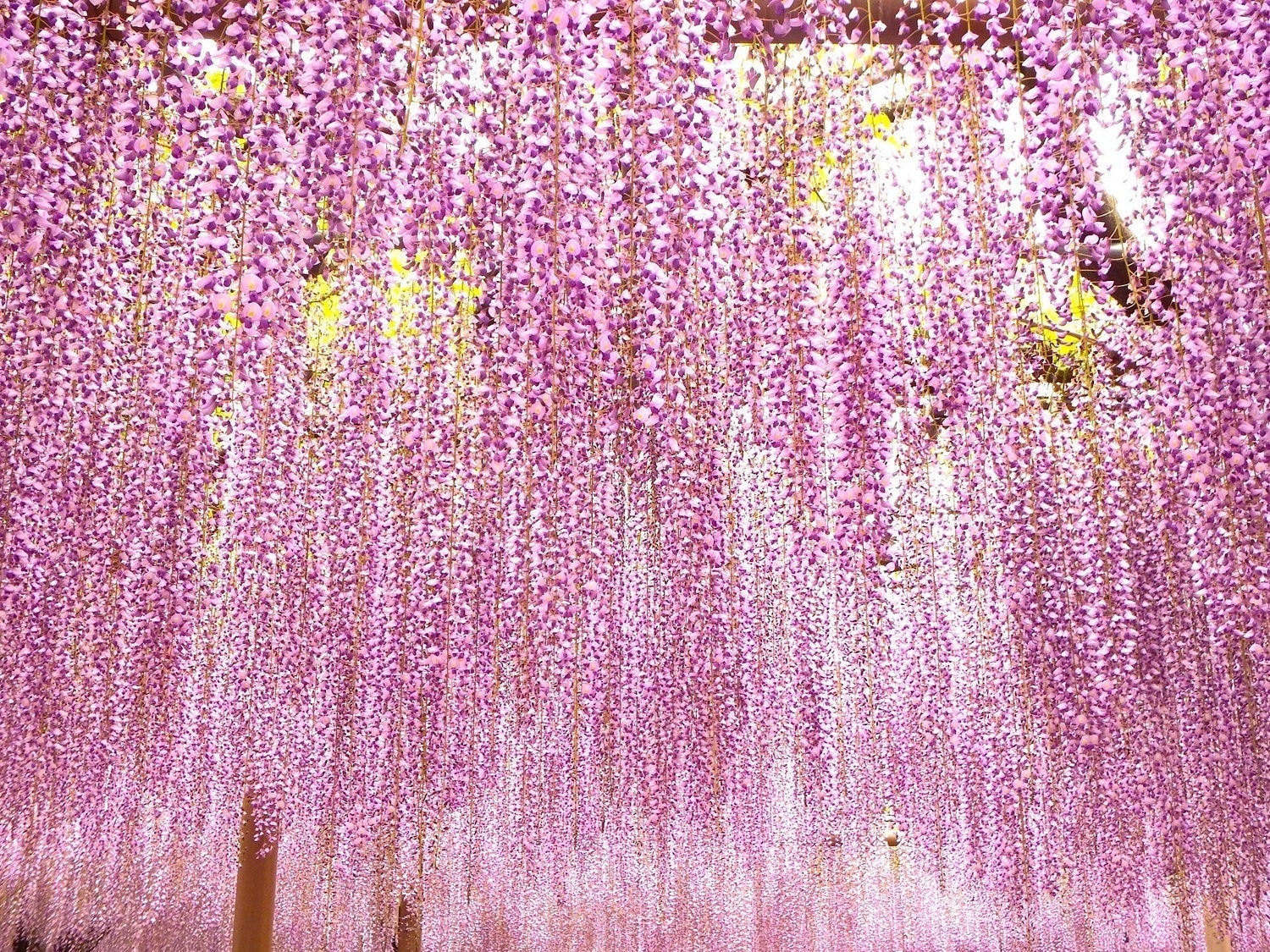 Mandara Temple was built in Owari (in what is now Aichi Prefecture) in the first half of the 14th century at the behest of Emperor Godaigo.
The temple has a gorgeous wisteria trellis, some of which has been transplanted to a neighboring park, and the Konan Wisteria Festival, one of the largest and most popular events in Japan, offers a spectacular view of the wisteria in bloom under the management of the city of Konan.
You can enjoy the magnificent view of the flowers at this event. Konan Wisteria Festival is held around Golden Week every year.

During the Konan Wisteria Festival, a 75m long Wisteria trellis with purple, red and white flowers blossoming at a different stages, is displayed in an area of 4,700m². The park is filled with sweet smell of the flowers.
You can see the extraordinary beauty of Konan Wisteria Festival even in the video. Check out the amazing wisteria in bloom!

The Konan Wisteria Festival, one of Japan’s largest Wisteria festivals, is held in Konan City, Aichi prefecture.
The city was formed in 1954 after the merger of Tanba Gun Kochino Town (丹羽郡古知野町 Tanbagun Kochinocho), Hotei Town (布袋町 Hoteicho), Haguri Gun Miyata Town (葉栗郡宮田町 Hagurigun Miyatacho) and Kusai Village (草井村 Kusaimura). Towns and villages were merging left and right during the Showa period, and it eventually came to be called the "Great Showa Merger" (昭和の大合併, Showa no Daigapei).
The main industry is the manufacturing of electronic components, and the industrial area has one of the largest weekday worker populations in Aichi Prefecture. You can learn about the history and culture of Konan City at the Konan City History Folklore Museum.

Event Details and Access for the Konan Wisteria Festival

During the Konan Wisteria Festival, there are various events around Mandara Temple. The atmosphere of the festival is boosted by these events.
There are various concerts at Mandara Temple’s stage next to the site and other places within the city. The lighting on Wisteria trellis creates a magnificent view in the evening.
There is also a photo competition. If you think you're good at photography, why not enter into the competition with your own photos? At the very least you'll have something to post on Instagram if you don't win.
Throughout the video, you are of course, shown the best of the Konan Wisteria Festival, with its gorgeous purple walls.

During the festival, there is a free shuttle bus connecting Mandara Temple, Suitopia Konan (すいとぴあ江南), Flower Park Konan (フラワーパーク江南), and Ongakuji Temple (音楽寺 Ongakuji).
The timetable can be downloaded as a PDF file from official Konan Wisteria Festival website.
There are 14 car parks (500 yen for 3 hours) around the Mandara Temple made available by the Tourism Association. Please use these if you're planning on going by car.

Other popular tourist attractions in Konan City include Flower Park Konan.
It is filled with beautiful flowers, yet it is not so well-known. Another place is Kannon Temple (観音寺 Kannonj), an ancient Japanese temple, where you can experience serene scenery.
Be sure to visit these places when you're in Konan City.

As an industrial city, Konan City is not a big tourist city. It’s a regional city with warm climate and has a lot of greenery on its outskirts.
Konan Wisteria Festival, one of Japan’s largest Wisteria festivals, held in Konan City during Golden Week, is packed with tourists every year.
If you stay in Nagoya, you can also try out some of Nagoya’s local foods, too.

The peak of the festival is in the first half of Golden Week. However, you can see the wisteria in full bloom around mid-April.
If you prefer to enjoy the full view of the Wisteria blossom and its sweet smell in peace, you should visit there in the early morning when there are not many visitors about. You can go for lunch and stroll around the city afterwards.

Be sure to check out the video on the Konan Wisteria Festival and witness the beauty of the wisteria.
If you're interested in visiting, be sure to click on the links below for more information!