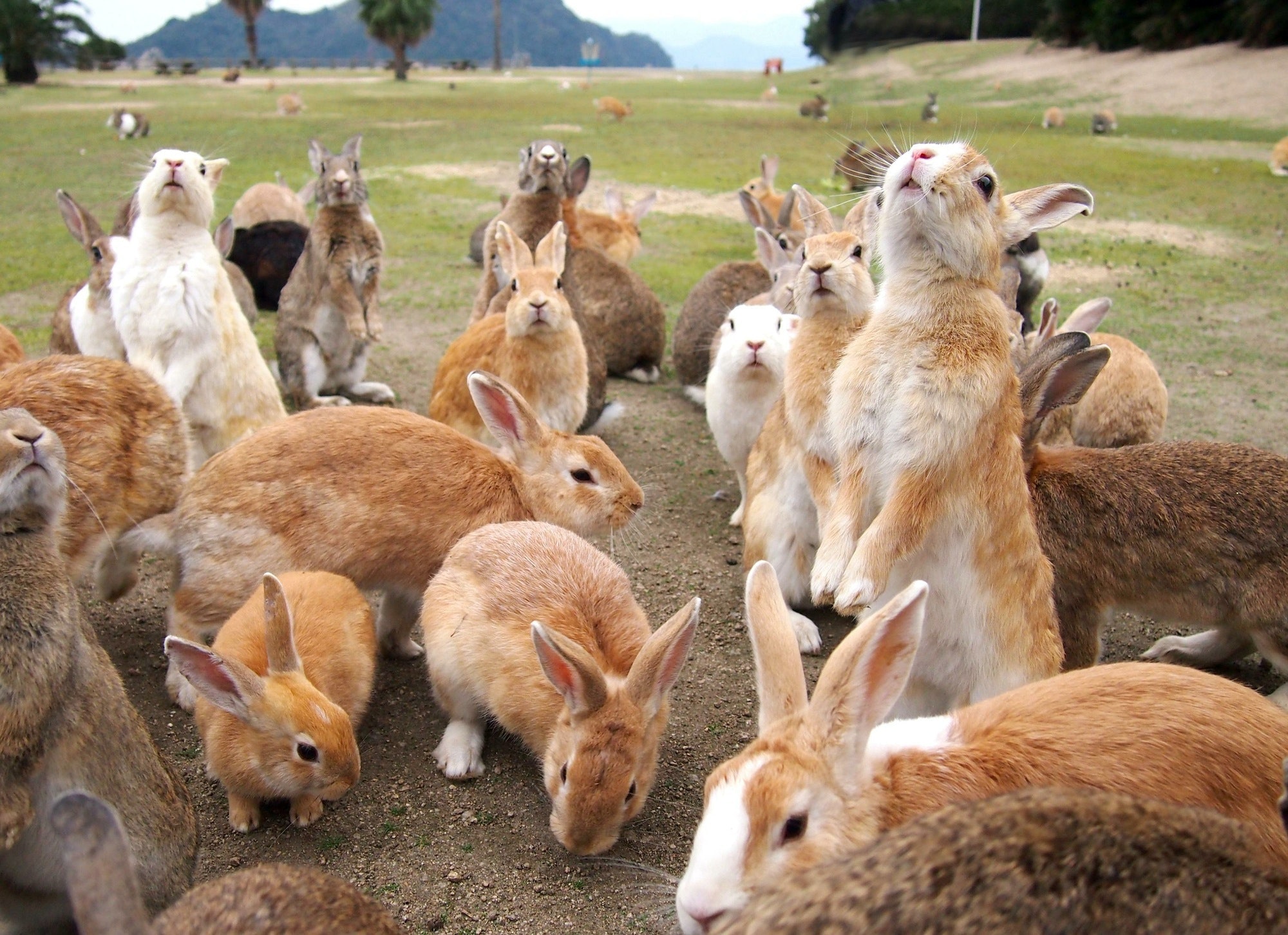 Introducing this video of Okunoshima

This video, titled "Okunoshima, AKA 'Rabbit Island,' in the Seto Inland Sea" (瀬戸内海の「うさぎ島」大久野島), was created by "AQUA Geo Graphic."

The video shows scenes of Okunoshima, an island in Takehara City, Hiroshima, in Japan's Chugoku region.
Adorable rabbits fill the screen, hopping around freely and you can enjoy their cuteness to your heart's content.
More than 900 rabbits currently inhabit Okunoshima, and in recent years, the island has been attracting attention as a tourist area, with many visitors from both Japan and abroad.

Why is Okunoshima known as "Rabbit Island"?

You're probably wondering, "Are there really that many rabbits on the island"?

Originally there were only 8 rabbits on the island. They were raised at a local elementary school in 1971.
Over time, the island was deserted, and the rabbits were released to live in the wild.
The rabbits belong to the European rabbit species, and are so fertile that they have actually been designated one of the 100 worst invasive alien species in the world.
After being released into the wild, they multiplied rapidly, leading to a massive rabbit population in just a short amount of time.
The trading of European rabbits is currently strictly regulated and Okunoshima is one of the few places in Japan where these wild rabbits can be seen.

In fact, Okunoshima became a hot topic overseas before it gained attention in Japan. A foreign tourist who visited the island for sightseeing posted a video playing with the rabbits, and the video gained a lot of attention online.
In addition, it just so happens that in 2011, it was the zodiac year of the rabbit and Japanese media introduced the island as "Rabbit Island" and that became the reason for the island's rise in popularity.

A Look at Okunoshima

Okunoshima is a small island with a circumference of about 4 km.
You can make a full trip around the entire island on foot or on bicycle, and driving is prohibited.
Additionally, be sure to follow the island's rules when interacting with the rabbits.
Rabbits are anxious animals and are very sensitive to sound.
Although the rabbits living on the island are wild, they are very friendly towards humans due to having become used to being fed by hand. This can be seen from 0:44 in the video.

Unfortunately, the sounds of engines, braking, and honking are frightening and confusing to the rabbits.
Furthermore, if you attempt to forcibly pick up or touch the rabbits, they may bite in self-defense, causing injury.
Their bites are quite strong, so be careful!
There are devices installed along the coastline which visitors can use to find out what the world sounds like to rabbits.
This will show you why it's important to be careful around the rabbits.

Okunoshima was temporarily uninhabited during World War II, but now almost the entire island has been designated a tourist destination.
The land is owned by the Ministry of the Environment, with the Kyukamura Association being in charge of the daily operations of "Kyukamura Okunoshima Hotel".
In other words, most of the current inhabitants of the island are the employees of the hotel and their families.

The History of Okunoshima

Okunoshima Island is now a place visited by many tourists who come to play with the adorable rabbits.
However, during the early Showa Period, it was actually home to Japan's only poison gas factory, built by the Imperial Japanese Army.
Additionally, it was originally meant to host a factory for building warships.
This dark history led to the island being erased from maps for many years.

There were a few private houses on the island, but the original islanders were forced out of their homes in order to build the poison gas factory.
The history of that time is recorded in the Poison Gas Museum (毒ガス資料館).

The island can be accessed via the ferry that departs from the Mihara area (三原地域). There is no plane access to the island.
A trip by ferry takes only about 15 minutes, which means you can enjoy taking a day trip to see the rabbits on the island.

You can also enjoy lunch at the restaurant.
Detailed information can be found on the official website of the Okunoshima Visitor Center.