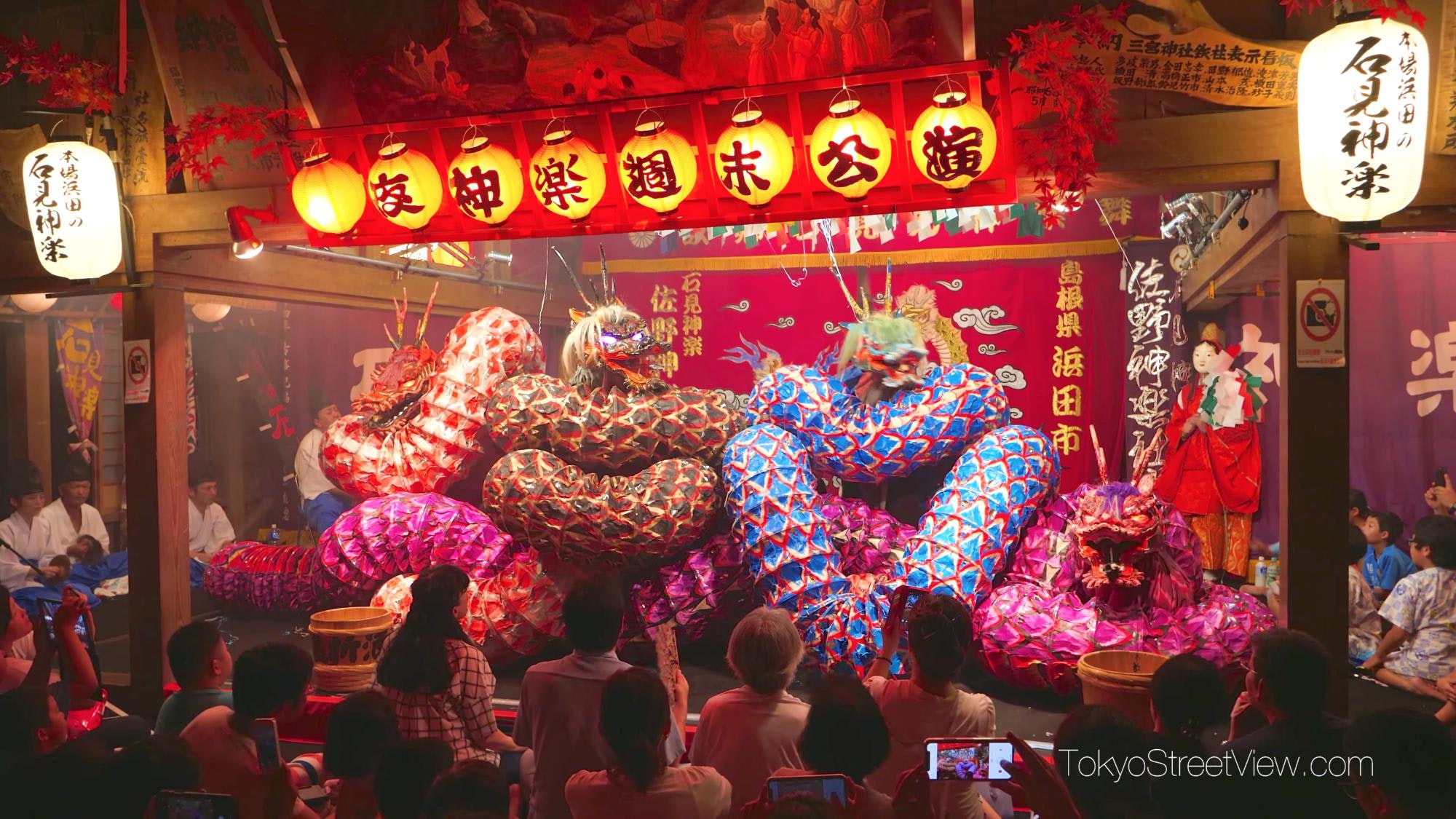 The Iwami Kagura dates back over 1300 years.
The themes of Iwami Kagura are based on ancient mythology, the Nihon-shoki, and the Kojiki.
The most famous program in Iwami Kagura is the Orochi (or great serpent).

The video gives you the special opportunity to view over 30 minutes of footage taken from Iwami Kagura.
Please enjoy watching this traditional Japanese performance!

When you think of a Shinto ritual offering to the gods, some solemn, dignified images may come to mind, however Iwami Kagura is a very entertaining and fun experience that anyone can enjoy.
The excitement of the dancers and giant serpents moving around to the sound of the fast-paced music really draws you in!

A considerably large Orochi with a length of 17 meters can be seen at 8:10 in the video.
From 8:55, four of these Orochi appear on stage and dance around each other in a magnificent performance.
These long Orochi are designed similarly to a paper lantern, meaning that when they are folded back they come to a length of only 1 meter.

The Story Behind Iwami Kagura Orochi

In a land called Izumo, a deity named Susano-o told the elderly couple Ashinazuchi and Tenazuhi that seven of their daughters had been devoured by an eight-headed serpent and that their eighth daughter, Kushiinadahime would be next. Susano-o bravely slays the serpent, and presents The Sword of Kusanagi which came out of the serpent, to his sister Amaterasu and then marries Kushiinadahime.

This story is told throughout the entirety of this video.

Where Is the Iwami Kagura Orochi Held?

You can see the traditional performance Iwami Kagura Orochi in Oda city or Hamada city in the Iwami region of Shimane prefecture.
There are other famous programs in Iwami Kagura such as Ebisu, Hachiman and Noumai to name a couple.

If you are interested in watching Iwami Kagura, please take a look at the performance schedule and visit one of the following performance locations: Yunotsu Hot Spring (温泉津温泉, yunotsuonsen), Tatsunogozen Shrine (龍御前神社, tatsunogozenjinja), Arifuku Hot Spring, Yunomachi Kagura Hall, Paretto Goutsu or Iwamigoya.
Most of the venues have parking making it convenient to travel by car.
Even those who live far away can easily enjoy sightseeing around Iwami!

In this video, we present over 30 minutes of footage of the Iwami Kagura Orochi performance held in Shimane prefecture.

We hope you make the trip to Shimane prefecture to enjoy this wonderful performance which has been passed down for generations!