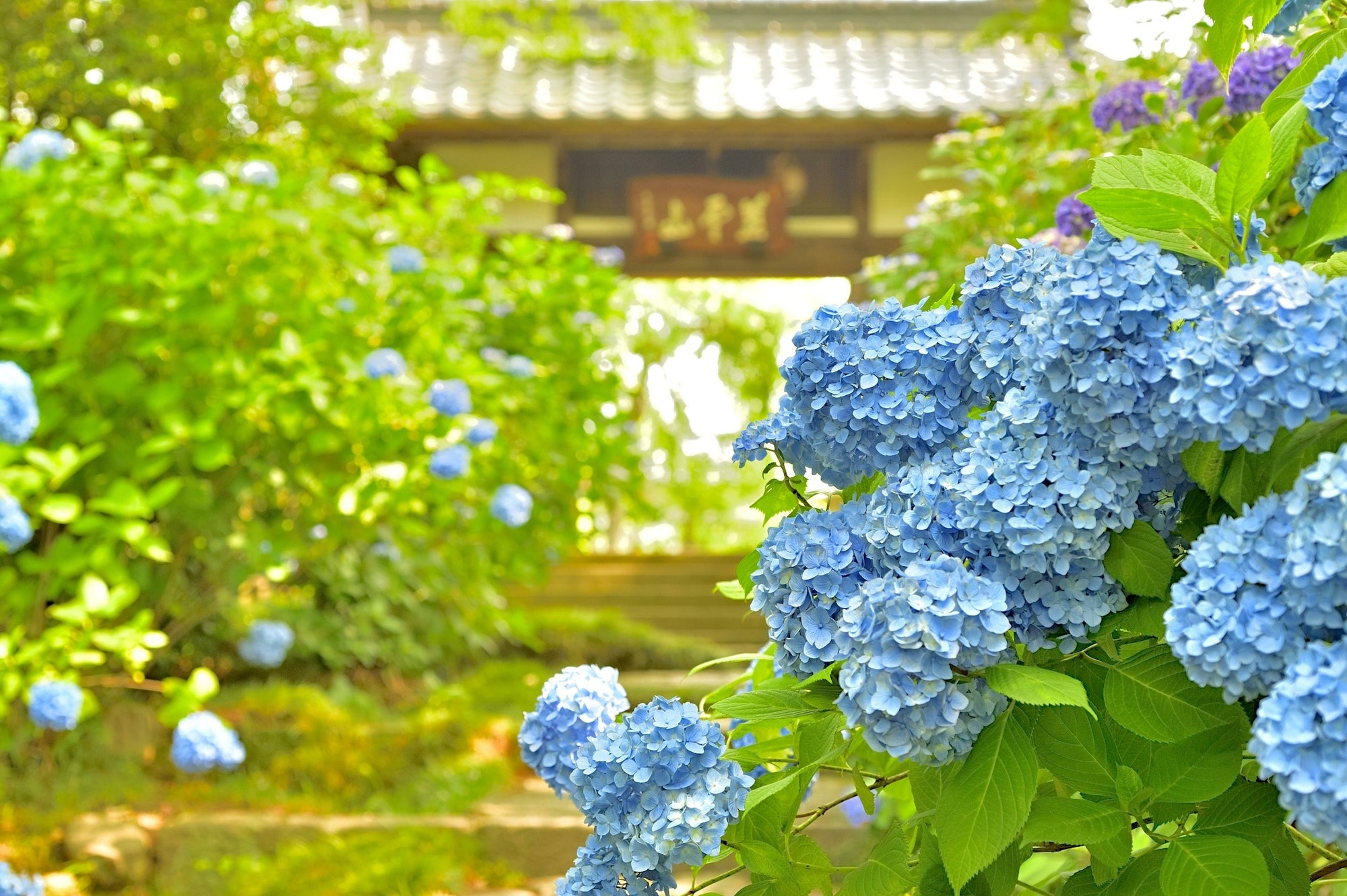 As suggested by the name "Hydrangea Temple," Shifukuji Temple is known for its more than 1,200 bunches of blooming hydrangeas.
The temple is a popular sightseeing destination in Sendai.

An especially popular and Insta-worthy spot is the hydrangea-lined path leading to the sanmon gate. This can be seen at 0:56 in the video.

Shifukuji Temple (Hydrangea Temple) has a long and rich history. It was originally constructed in Takahata Town, Yamagata Prefecture (山形県高畠町, Yamagata-ken Takahata-machi) in the Tohoku region of Japan. During the Warring States period (1467～1615), Kosai Soitsu (虎哉宗乙, Kosai Soitsu) became the chief priest of the temple.
After Kosai became the educator of Sendai’s feudal lord Date Masamune (伊達政宗, Date Masamune), the temple was moved to Sendai.
The ruins of the former Shifukuji Temple can still be found in Takahata Town, along with the graves of Date Masamune’s ancestors and Endo Motonobu (遠藤基信, Endo Motonobu), one of the Date clan’s chief vassals.
Shifukuji Temple is also known for the statue of Ninomiya Sontoku (二宮金次郎, Ninomiya Sontoku).

Parking spaces are available behind the Main Hall of Shifukuji Temple. However, as the roads leading to the temple are narrow, we recommend that visitors take public transportation such as buses.

The peak viewing season for the hydrangeas is late June, and many events, such as matcha-tasting at Shoshoin (小書院, Shoshoin), are held.
However, as many visitors congregate during this time, it can be difficult to find a free parking space.
In addition, a zen meditation session is held on the 1st of every month.
This is also a popular event that draws many visitors.

The Hydrangeas of Sendai's Hydrangea Temple

Hydrangeas bloom during Japan's rainy season, and appear in shades of white, purple, blue and red from May to July, growing to about 1m to 2m.
In Japan, they symbolize both a young girl’s love or persevering love, as well as the opposing meaning of capriciousness and betrayal.
The latter meaning is thought to be derived from the fact that the flowers' color changes depending on the quality of the soil.
The colorful cluster which is frequently mistaken for flowers is actually the calyx of the hydrangea, with the flower petals hidden in the middle of the cluster.
This is where pollination occurs and seeds are formed.

The cultivation and care of hydrangeas is fairly simple, making it great plant even for beginners at gardening.
For potting, first cut 2 centimeters off the stem of the hydrangea.

Place the cut stem in water for about 30 minutes. In the meantime, place a net at the bottom of the pot, then fill the pot with Kanuma soil or Akadama soil and then moisten it.
Next, create an opening to insert the cut stem. In about one month’s time, roots will grow. After the roots have grown sufficiently, transfer the shrub to a large pot.
Place the pot in a place with plenty of sunlight, water the shrub frequently, and the hydrangea will grow healthily.

How about it? Revitalize yourself and enjoy the sight of colorful hydrangea at the Hydrangea Temple!

Furthermore, besides the hydrangea season, during other times of the year, you can enjoy the majestic bamboo forest as well!
There is even a goshuin (commemorative seal stamp) available.
This can be seen at 1:50 in the video.