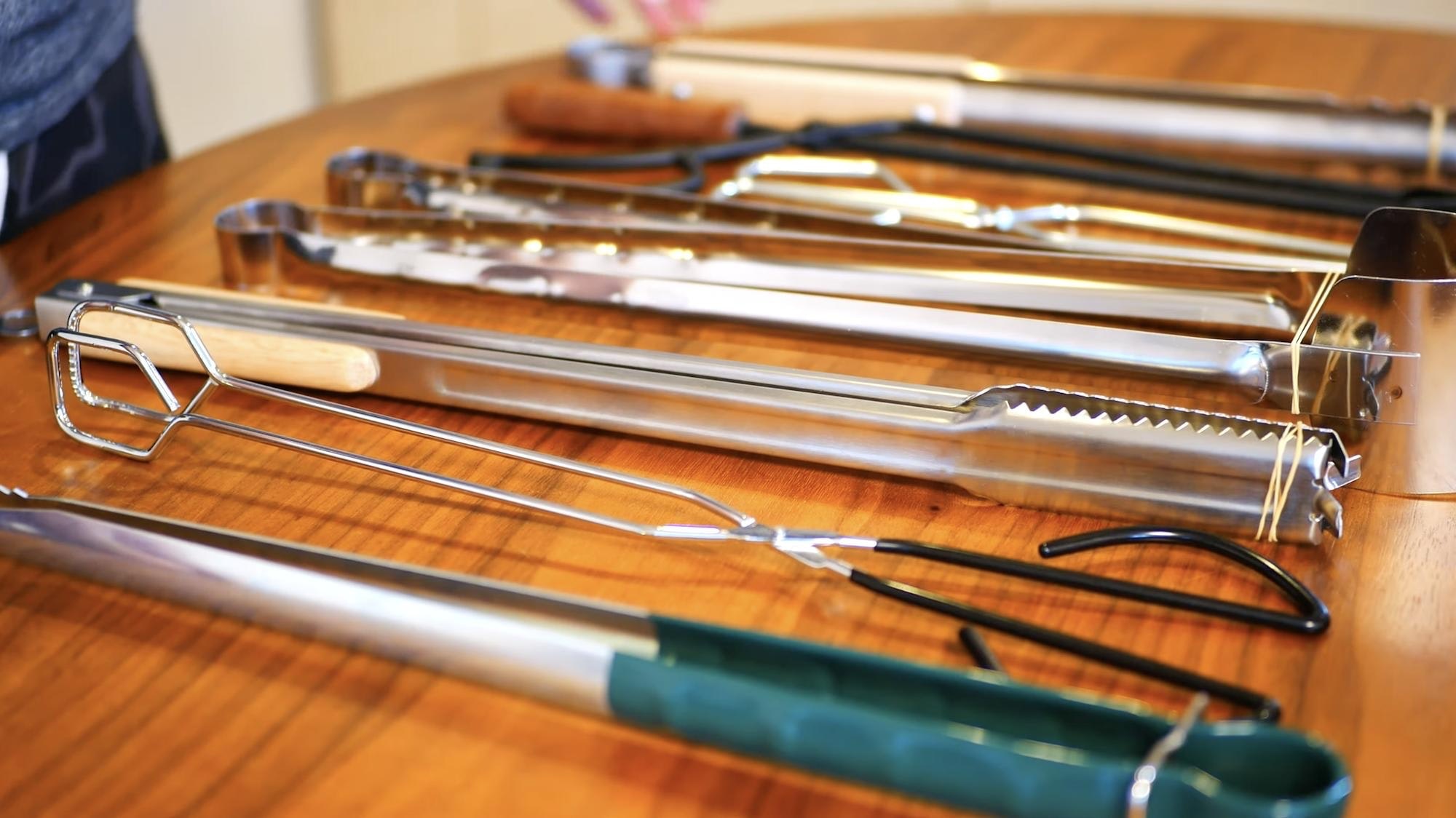 Choosing the Right Fire Tongs for Camping in Japan

Fire tongs are an indispensable piece of equipment for camping if you're planning on building a fire. More and more people are starting to enjoy both solo and family camping in Japan. In this article, we'll introduce a video goes over the different features and comfort of fire tongs.

Fire Tongs: Features and Ease of Use

If you're just getting started with camping or other outdoor activities, or you're finding your current fire tongs difficult to use or in need of replacement, this video is for you! The video introduces the characteristics of each pair of fire tongs, how comfortable they are to use, and how well they can actually handle charcoal and other materials. Hopefully it helps you find a new pair of fire tongs.

Snow Peak's fire tongs are 40.5 cm long, approximately 4 cm wide, made of stainless steel, and weigh approximately 200g. They open in a V-shape and can be stored compactly simply by putting a rubber band on the tips to hold it shut. The grip is made of beech wood, making it easy to hold, and the jagged tip makes the fire tongs suitable for campfires and barbecues. They also look stylish.

Reviews state that the tongs are reliable even when used with heavy firewood, and that they don't warp easily and are easy to use. Although some strength is required when picking things up, the large opening makes it easy to grab large coals and other items.
[Video] 1:55 - Snow Peak's Fire Tongs
[Video] 8:36 - Picking Up and Moving Charcoal

TEOGONIA's fire tongs are 42 cm long and weigh 390g. The body is made of steel and the grip is made of high-quality rosewood. The tip of the tongs opens wide for a firm grip.

However, it may be difficult for some people, such as those with smaller hands or women, to open them wide. It may be better to actually try them out in a store before purchasing them.
[Video] 10:00 - TEOGONIA Fire Tongs

The ONOE fire tongs are relatively reasonably priced fire tongs. The video shows how the flat shape allows you to grab charcoal and kettles without difficulty. This product can also be used for picking up trash.
[Video] 18:46 - ONOE Fire Tongs

The Captain Stag Wide BBQ Tongs also open wide in a V-shape, and require a rubber band or some other binding to store them easily. This is a larger type with an overall length of about 47 cm. They are made of stainless steel and feature a wider width at the tip.

The wide tip allows for a firm grip on large pieces of firewood or charcoal. Made of stainless steel, it is resistant to rust and can be used not only for camping but also for picking up trash, such as empty cans and twigs.
[Video] 20:52 - Captain Stag Wide BBQ Tongs

The Captain Stag Dutch Oven Tongs feature a Dutch oven lifter at the tip. The overall length is about 49 cm and the tongs themselves are rather large. The grip is made of natural wood. With a load capacity of 5 kg, this product can be used as both fire tongs and a lid lifter, making it useful for those who use Dutch ovens when camping.

Compared to Snow Peak, they require less strength to clamp down on something. Some say they're easy to use because the handle is made of wood, while others say it is difficult to use because of the unique tip. This is a product that has a niche use and should be purchased for specific uses.
[Video] 23:39 - Captain Stag Dutch Oven Tongs

The Vieaura Fireplace Tongs are 38.5 cm long, and weigh only 15g. They are lightweight, and are suitable for use in a wide range of applications. The long handle is also a good choice for those who are concerned about getting burned. Because the tongs are light and slim, some say the tongs aren't strong enough, and some people with smaller hands may find the tongs difficult to open wide. On the other hand, there are also reviews that say the tongs are easy to use and grip charcoal firmly, so this is another pair of tongs we recommend trying at a store before purchasing.
[Video] 27:27 - Vieaura Fireplace Tongs

The Captain Stag Large Charcoal Tongs have a total length of 45 cm and include a stopper for easy storage. The jagged tip makes them easy to grasp objects with, and the grip is vinyl-coated to prevent slipping. Reviews include comments that say the rubber grip is easy to use, while others say the tongs aren't durable and the clip for storing the fire tongs comes off easily.
[Video] 30:58 - Captain Stag Large Charcoal Tongs

Summary of Fire Tongs for Camping in Japan

Fire tongs come in a wide variety of types and at varying prices. Your choice will come down to your camping/outdoor preferences, how you plan to use the tongs, and who will be using them.

You can purchase fire tongs online, but if you're interested in a product after watching the video, consider trying it out in a store to get an idea of what the product is like before buying it. Don't forget to check the length as well, as you also want to be careful about safety when dealing with fire. By choosing the perfect camping equipment for you, you can enjoy a more comfortable outdoor experience.