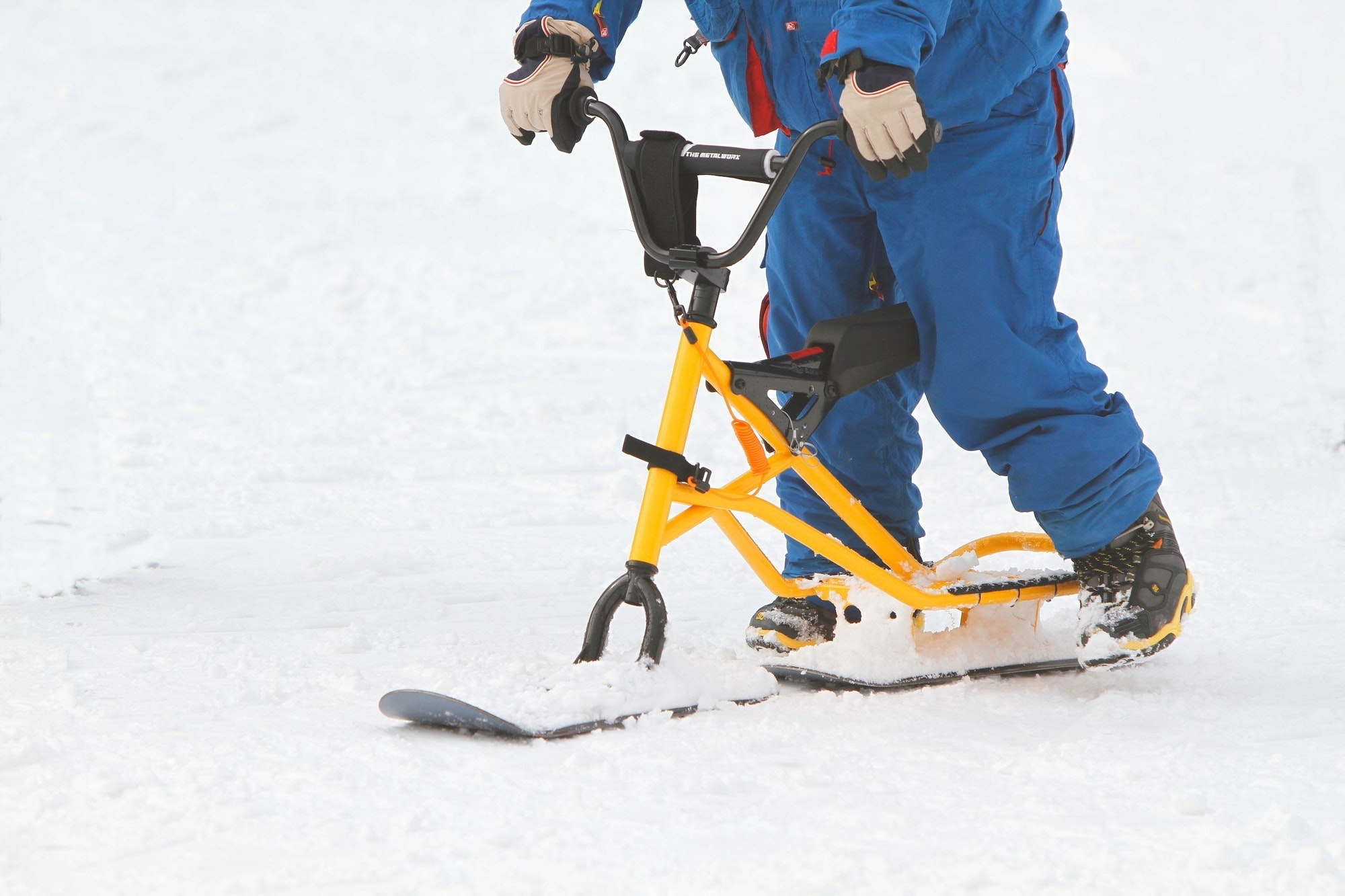 Snowscoot is a new and popular winter sport that is gaining attention as a snow sport and snow activity. Dubbed a "snow bike/bicycle sled," it's a BMX-bike frame mounted on 2 boards that are independent of one another, which allows for steering.

The Popularity of the Snowscoot

One of the reasons the snowscoot is so popular is because anyone can enjoy it; from beginners, to pros, children and adults, it doesn't matter, just get on and go!
Unlike a snowboard, you can easily balance thanks to the handlebars. It's also very easy to control, so even those who are new to it, can enjoy the snowscoot with peace of mind.
Currently, over 80% of domestic ski resorts have them for rent. The fact that you can begin snowscooting without any gear on hand is also what makes this sport great.

Also, you can customize the frame, board, and handle with parts that fit your preference and the idea of being able to make a snowscoot that is tailored to each individual has won the hearts of many riders.
In 0:07 of the footage, you can see them performing maintenance and making adjustments to a snowscoot, and from 0:24, you can see them glide down the pure white slopes at tremendous speed.

The History of the Snowscoot

The snowscoot was made in the early 1990’s in France and it was commercialized as a new winter sport following skis and snowboards.
Franck Petoud, a French BMX rider, designed the frame to be similar to that of a bicycle and then attached 2 boards to the front and back of it.
Attempting to fly down the slopes with this, it became the prototype of the snowscoot, and the bicycle manufacturer SUNN announced it as an official product.
Afterwards, the snowscoot underwent its own development, with France being at the center of it all, and it was imported to Japan around 1994.
Due to its novel appearance and high level of safety, we have been able to use them at many ski resorts in Japan.

Because the origins of this sport lay in BMX, you can enjoy acrobatic tricks, such as aerials that use jumps and carving turns like the ones in snowboarding.

Snowmotos, which have a similar shape, were made in America. These have a seat boom (a seat that you can put between your legs), and there is a slight difference in how you ride it.

You can buy the Snow Scoot at sporting goods stores as well as online.
Prices vary by product, but entry-level snowscoots, such as the ONE-D, are priced at around 109,000 yen (~$1,000 USD) before tax.
If you are concerned about the price, you can also buy used. Clothes, boots and shoes are basically the same as for skiing and snowboarding, and it doesn't require any special equipment

As introduced in this article, snowscoot is a easy winter sport that allows you to glide down the mountain with the familiar feeling of riding a bicycle.
You can use the snowscoot at many ski resorts, such as the Aizu Kogen Takatsue Ski Area and the Shiga Kogen Sun Valley Ski Resort, so definitely try one out!