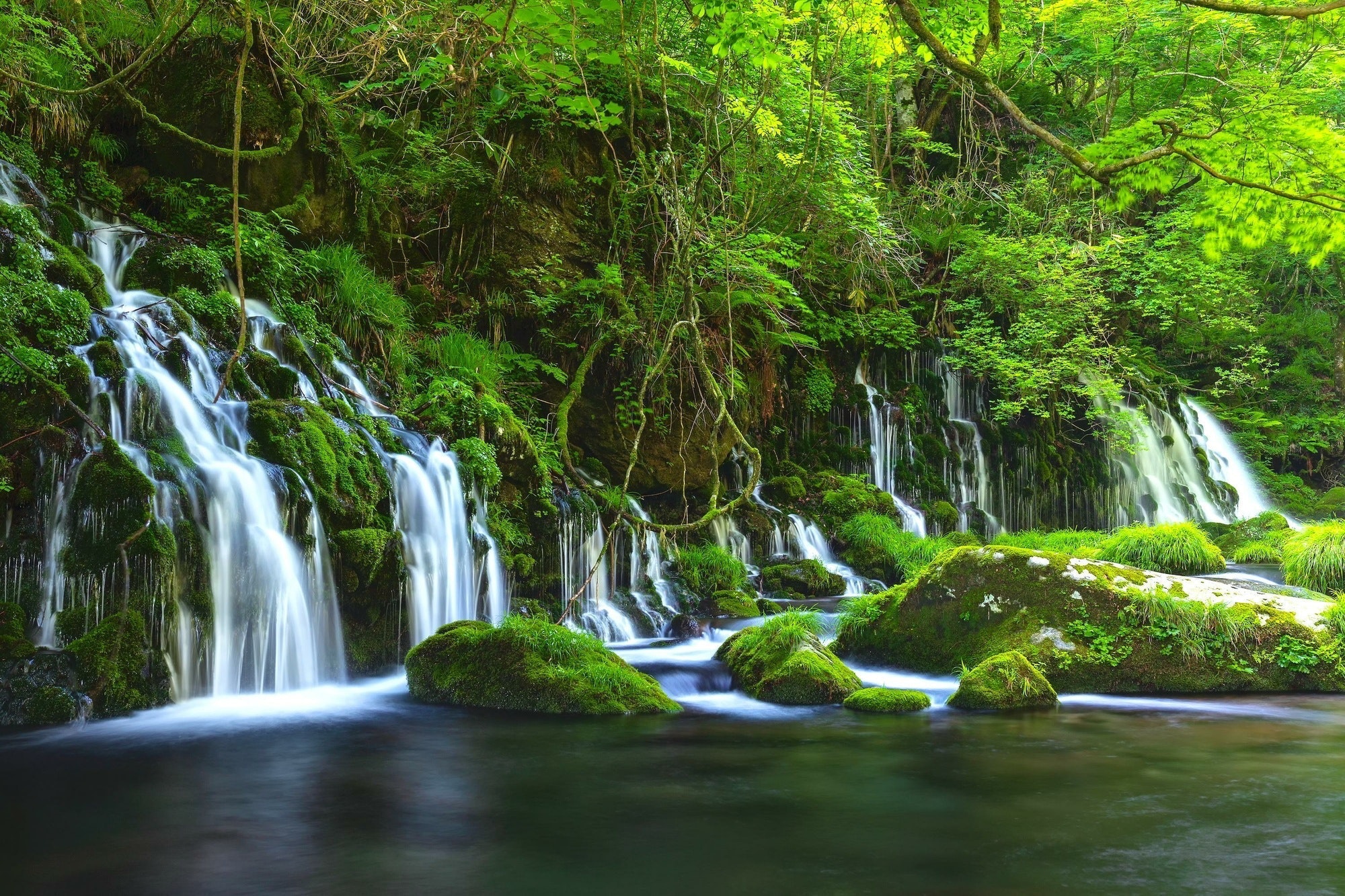 Mt. Chokai & Tobishima Geopark is the name of Akita Fuji (秋田富士), Dewa Fuji (出羽富士), and Shonai Fuji (庄内富士), which have been selected as some of the 100 Famous Mountains and 100 Famous Geographical Features of Japan.
Furthermore, it is also the name of the "Mysterious Island Tobishima" and "Chokai National Park," which is located about 30 km west of Mt. Chokai, and was recognized as a Japan Geopark in 2016.

Nowadays it's called Mt. Chokai, but in ancient times it was known as "Torimiyama" and you could see a 360-degree view of the horizon from the top.
Due to volcanic eruptions and other volcanic activities, this view is no longer visible and it is now called Mt. Chokai.

In this article, we'll introduce the "Mototaki Underflow," an ethereal waterfall flowing down a rock face at the foot of Mt. Chokai in the Mt. Chokai & Tobishima Geopark area.

What Exactly is a “Geopark”?

The word "geopark" (“ジオパーク” jiopaaku in Japanese) is a combination of the words “geo” and “park.”
It was selected for the purpose of learning about the natural environment and ecosystems that spread across the land, as well as the culture and industries that people have created.
At present, there are 43 areas selected as Japan Geoparks, and 9 of them are also recognized as UNESCO Global Geoparks.

As they are sometimes called "大地の公園" (Daichi no Kouen, lit. "Earth Parks") in Japanese, they are famous for the various scenery they offer throughout the year, and are especially popular during the fall with the autumn leaves change to beautiful shades of red and yellow.
There is also a sake brewery in the area that uses clean spring water, so if you like sake, be sure to take a tour of the brewery.

The Mototaki Underflow Located at the Foot of Mt. Chokai

As you can see from 0:42 in the video, the waterfall is relatively small, only 5 meters tall and about 30 meters wide, yet 50,000 tons of water flow from it each day.
The fantastic scenery created by the moss and the subterranean stream flowing out of the gaps in the green rocks is fascinating, and surely allows for some beautiful photos to share on Instagram.

1. Mt. Chokai Omonoimi Shrine/Fukura Kuchinomiya (Chokaisan Omonoimi Jinja Fukura Kuchinomiya)
An old shrine, said to be the oldest shrine in the Shonai region, with origins dating back to 1963.
It sits on the summit of Mt. Chokai, and there are two satomiya (shrines built in a village for the convenience of worshippers) called "Kuchinomiya" (口ノ宮, lit. "entrance shrines") at the foot of the mountain, one at Fukuura and the other at Warabioka.

2. The Shirai Rice Fields and Weirs
This farmland was developed in 1800 based on the concept of rice fields for the Han-School of Shonai Chido-kan by Yadayu Shirai, the county representative of the Shonai domain.
There are many innovative ways to heat and utilize the cool spring water of Mt. Chokai, and you can see the fruits of the wisdom of the area's ancestors here.
It's a 10-minute drive east from Yuza Station.

3. Hokotate Observatory
Mt. Chokai & Tobishima Geopark is also famous for its mountain climbing, and the Hokotate Observatory is a popular tourist spot where you can enjoy the magnificent view of Mt. Chokai.
The observatory is located at the fifth station of the mountain, which can be reached by car, so it's possible to stop by during your drive, and there are a number of mountain lodges on the way to the summit, so you can take breaks as you go.
When climbing the mountain, we recommend asking for a mountain guide or participate in a geotour so that you can learn more about Mt. Chokai.

4. Chokai Blue Line
Chokai Blue Line is a mountainous road that rises from zero to 1,100 meters above sea level, and during the fall, amongst the autumn foliage, it offers a spectacular view worthy of any bucket list.

Mt. Chokai and Tobishima Geopark has become a nature-rich spot called "緑のダム" (The Green Dam) due to the planting of beech trees by the townspeople to preserve water quality and purify the water source.
In addition to sightseeing, be sure to try some gourmet foods like delicious Akita Iwagaki Oysters, which contain many minerals from the spring water!