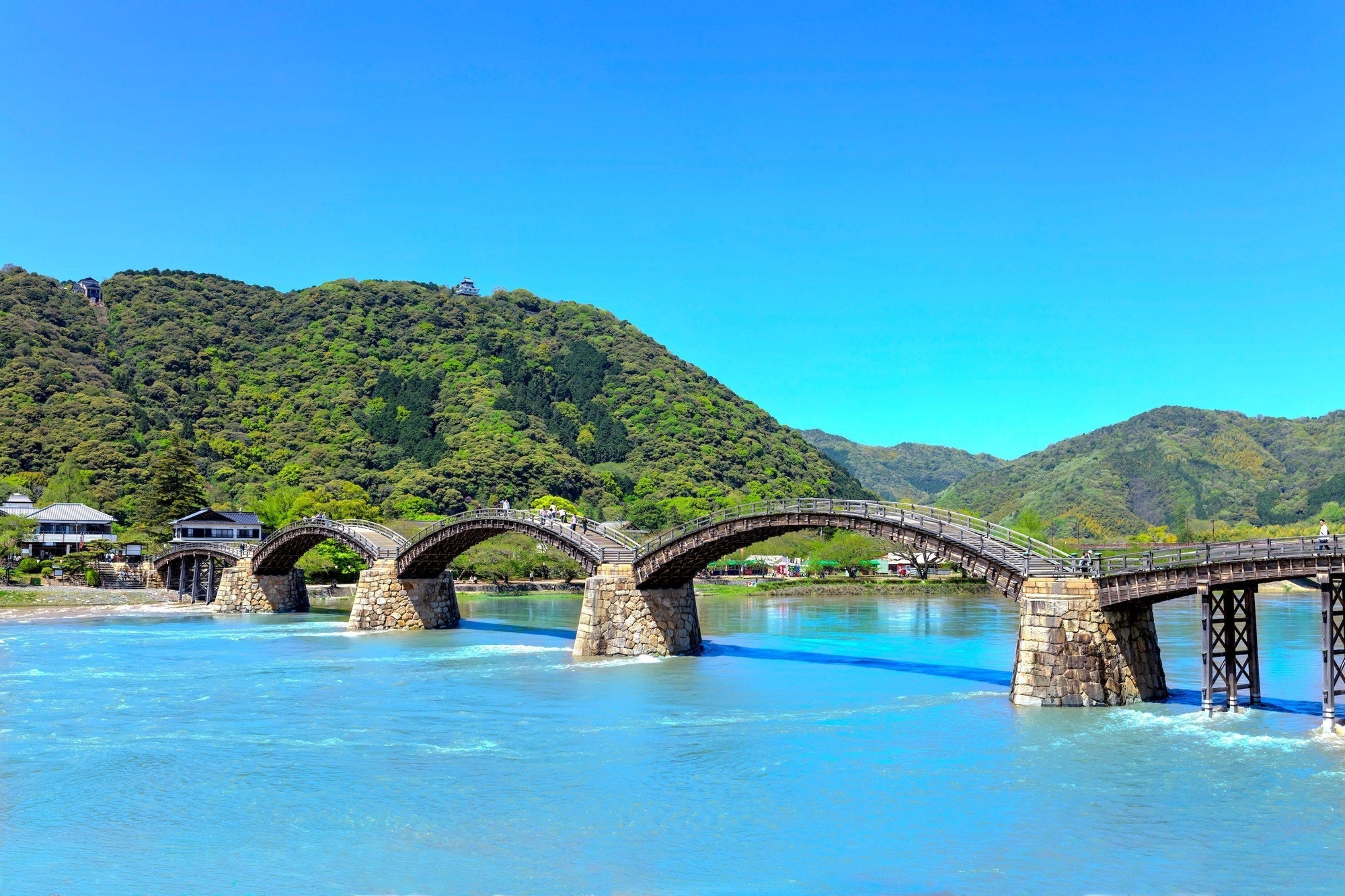 Kintaikyo (Kintai) Bridge, located in Iwakuni, Yamaguchi prefecture in Japan's Chugoku region, is known as one of Japan's "Three famous bridges," and is also one of Japan's "Three strangest bridges."
This video will show the beauty of the historic, Japanese bridge "Kintaikyo."
Iwakuni cormorant fishing is also introduced towards the end of the video (2:00).
Sit back, relax, and enjoy the stunning Kintaikyo bridge.

The bridge is 193.3 meters long, 5 meters wide, and has a five-layered arch form that stretches across 4 stone piers.
The main structure was built without using a single nail, using braided wood joinery techniques such as joints and fittings, and is a very rare piece of architecture.
This Japanese craftsmanship can be seen in the video at 0:23.

The Kintaikyo Bridge was washed away by floods many times in the past.
To solve this issue, the bridge was built in an arch form based on the "Seiko Yuranshi," a Chinese drawing depicting a flock of birds and a bridge.
The bridge is made using several kinds of Japanese woods based on their different traits. There is red pine, cypress, zelkova, chestnut, oak and hiba.
Although reconstruction has been done numerous times, the stone pier and pavement are still the one's from the original construction.

The area around Kintaikyo Bridge is famous for its cherry blossoms, which have been selected as one of the top 100 cherry blossom sites in Japan, and you can also enjoy the autumn colors here.
Many tourists visit to see the contrast of the historical bridge and the surrounding natural scenery.
Foreign tourists often visit in the cherry blossom season to enjoy Hanami (flower viewing).

The entry fee for the bridge is 310 Yen for adults and 150 Yen for children (*2019 Dec.). It's approximately 15-20 mins by bus from JR Iwakuni Station.
The Iwakuni Kintaikyo Bridge airport is also nearby, and it has 5 round trip flights/day to Haneda Airport.

As shown in the video (~2:00), cormorant fishing is a method used to catch sweetfish.

You can watch the cormorant fishing under the summer night sky on a sightseeing boat or from the Kintaikyo bridge.
The illuminated bridge, the bonfire on the cormorant boats, and the cormorant fishermen's sophisticated work creates a magical scene.
There are package plans that go with lunch and dinner too, so be sure to check them out.

Cormorant fishing has a long history.
It is listed in two of Japan's oldest historical documents, the "Nihon Shoki," and "Kojiki."
This fishing method is still used in places like Nagaragawa (Gifu), Ujigawa (Kyoto), and Kisogawa (Aichi) near Nagoya.

There are several spots you must visit when going to Kintaikyo Bridge in Iwakuni, Yamaguchi.

First, cross Kintaikyo Bridge and you'll reach the Iwakuni Castle Ropeway (1:07) in about 10 mins.
From there hop on the ropeway to see a beautiful view of Iwakuni and Iwakuni Castle, known as one of Japan's "Top 100 Castles" (1:11).
Iwakuni Castle was built by Hiroie Kikkawa, the first lord of the Iwakuni domain in Suo Province.
In 1615, only seven years after the castle was built, it was demolished in 1615 in accordance with the Edo shogunate's "One Domain, One Castle" decree, but in 1962, the current castle tower was rebuilt.

The whole view of Iwakuni, including Kintaikyo Bridge can be seen from the castle tower.
As you can see in the video (1:44), the view is absolutely amazing and makes for a great Instagram location.
The embankment has been remade as Kikko Park.

Iwakuni also has the Iwakuni White Snake Museum, which was built to raise and protect the lucky white snake that lives only in Iwakuni and is designated as a protected species by the Japanese government.
Next to the museum, there's Iwakuni White Snake Temple, a famous temple to receive economic fortune.
It was established in 2012 and is also a famous tourist spot.
In Iwakuni's biggest event, Iwakuni Festival, a huge paper decorated with white snake is paraded through the city to give people economic fortune.
The Nishiki River Fireworks Festival, which shoots off about 6,000 fireworks against the backdrop of the Kintaikyo Bridge, is another popular event where you can enjoy food stalls and Iwakuni drums.

Don't forget about food and Onsen to relax on your trip.
"Sasakiya Kojiro Shouten" and "Takenosato Musashi" featured on TV and other media is located nearby.
At these shops, named after the great swordsmen, Musashi Miyamoto and Kojiro Sasaki, we definitely recommend you taste the ice cream.
Near the Kintaikyo Bridge, tourists can enjoy great food, including Japanese cuisine, traditional Japanese candy, udon, tea stores to have lunch at, and other places to eat around.