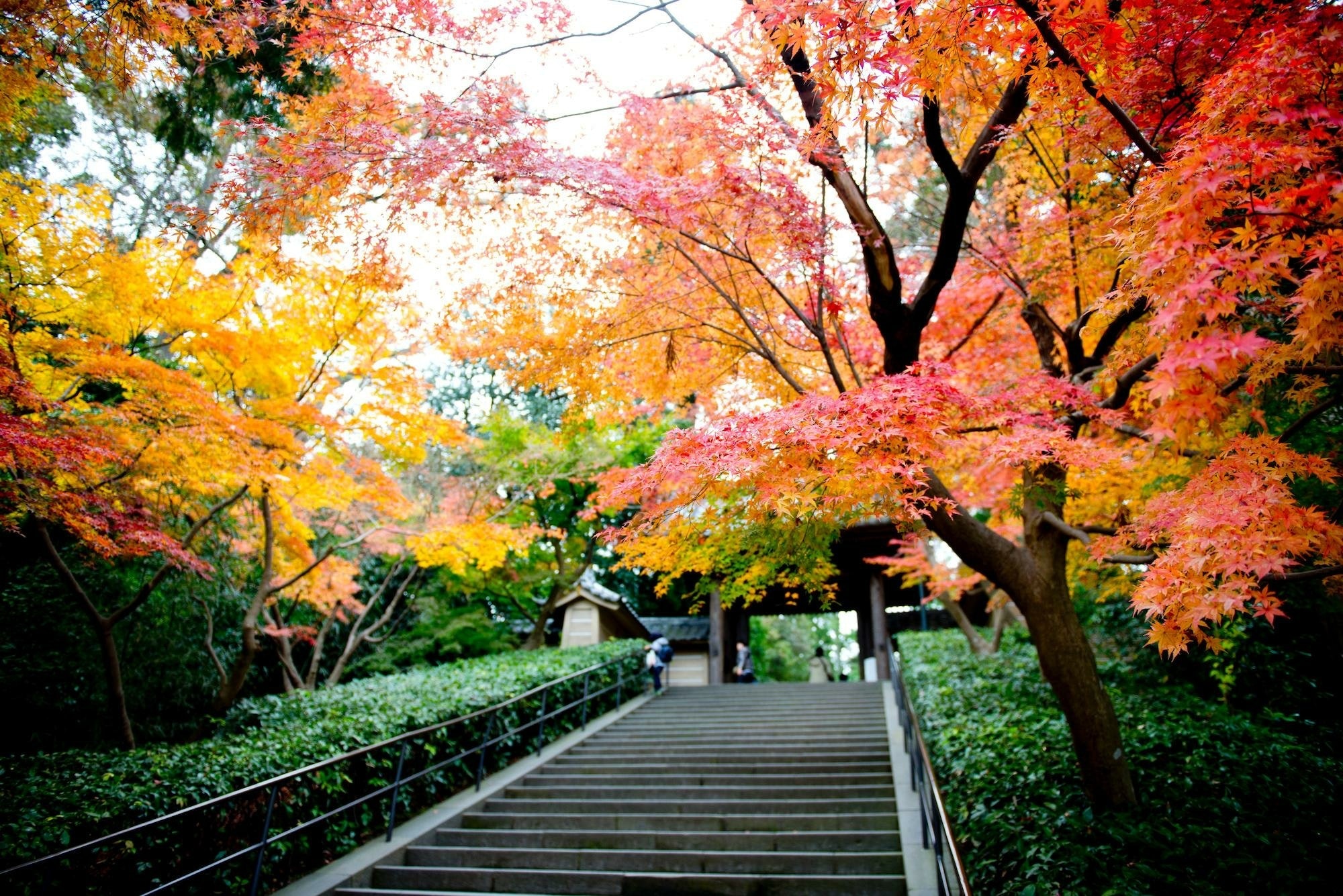 This video, titled "【Relaxing trip in Japan】Autumn Leaves in Kamakura: Autumn Leaves, Sweets and Jazz," was uploaded by "Japan travel Vlog 〜on the Sofa〜." Starting from Kitakamakura Station, this tour stops at famous autumn foliage spots and famous temples, and then takes the Enoden (Enoshima Electric Railway) train to Haseji Temple. It's a model course for anyone consider viewing the autumn leaves in Kamakura.
The video features beautiful autumn foliage accompanied by some relaxing jazz music which goes perfectly with the clear autumn sky, and delicious sweets at a café. Be sure to check it out.
[Video] 0:13 - Arriving at Kitakamakura Station

Kamakura is one of Japan's ancient capitals, and is surrounded by the sea and mountains, providing an abundance of natural beauty. Kamakura was the center of the country during the Kamakura period (1185 - 1333 A.D.), when the shogunate was located there, and the city has many places of historical interest. This year, a historical drama was aired on Japanese t.v., leading to Kamakura attracting even more attention as a tourist attraction.

Kamakura's four seasons are decorated with all sorts of colorful flowers and plants, including cherry blossoms in spring, hydrangeas in early summer, and autumn leaves in the fall.

In the order of the spots visited in the video, we'll also introduce some of the highlights of each tourist attraction as well.

●Engakuji Temple
Engakuji Temple is one of the largest temples in Kamakura and is visible as soon as you arrive at Kitakamakura Station. The majestic and powerful gate, which was the setting for Natsume Soseki's "The Gate," is the symbol of Engakuji Temple. The temple is also famous for its Shariden (reliquary hall), where the tooth of Buddha is enshrined.
Engakuji Temple is known as one of the best places to view the autumn leaves in Kamakura in autumn, and there are many spots within the spacious precincts of the temple where visitors can enjoy the autumn foliage. Best time to visit: Late November to early December
Visiting hours: 8:00 AM - 4:30 PM (November), 8:00 AM - 4:00 PM (December)
[Video] 0:20 - Engakuji Temple, a Place Famous for Its Autumn Foliage

●Tokeiji Temple
Tokeiji Temple used to be a temple for women to escape to, and although the temple code strictly forbade men to enter, this was abolished in 1871 (Meiji 4). Today, the temple is popular as a power spot for severing bad relationships and creating good ones. In addition, the precincts of the temple, which have been well maintained since the end of World War II, are beautifully decorated, not only with autumn leaves but also with seasonal flowers, and the temple has become known as a temple of flowers. It has become a famous flower spot in Kitakamakura and attracts many visitors.
Best time to visit: Mid-November to late December
Visiting hours: 8:30 AM - 4:00 PM

●Meigetsuin Temple
Meigetsuin Temple is renowned as a hydrangea temple, but its autumn foliage is also a must-see. It's famous for its "Window of Enlightenment," a round window in the main hall, through which visitors can peer into the beautiful garden, reminiscent of a painting. Visitors can also take some picturesque photos, making it a popular spot for Instagrammers.

In the garden behind the main hall, which is open to the public when the leaves change color, there are a variety of Jizo statues that visitors can see.
Best time to visit: Late November to mid-December
Visiting hours: 9:00 AM - 4:00 PM
[Video] 0:40 - Meigetsuin, a Temple Famous for Its "Window of Enlightenment"

●Chojuji Temple
Chojuji Temple was built to mourn Ashikaga Takauji, the founder of the first Ashikaga Shogunate, but is open to the public during spring and autumn, making it a great spot to visit during these seasons. The scenic dry landscape garden and beautifully colored autumn leaves are otherworldly. Visitors can sit on cushions placed on carpets in the Shohojo (the head priest's living quarters) and enjoy a relaxing view of the garden.
Best time to visit: Mid-November to early December
Visiting hours: 10:00 AM - 3:00 PM
[Video] 3:14 - Chojuji Temple, Open to the Public Only in the Spring and Fall

●Kenchoji Temple
Kenchoji Temple is the first of the five great Rinzai temples of Kamakura and the first full-fledged Zen temple in Japan. The temple's spacious precincts are home to many cultural assets, including the temple bell, a national treasure. If you climb up to the priest's quarters at the far end of the temple grounds, you can enjoy a magnificent view of Kenchoji Temple covered in autumn leaves.
Best time to visit: Mid-November to late December
Visiting Hours: 8:30 AM - 4:30 PM
[Video] 4:33 - Kenchoji Temple and Its Magnificent Gate

●Tsuruoka Hachimangu Shrine
Tsurugaoka Hachimangu Shrine, whose three deities are Emperor Ojin, Empress Jingu, and Himegami, is famous as a power spot for luck in victory, work, and marriage. The shrine is a leading historical site in Kamakura, and is associated with Minamoto no Yoritomo. In autumn, it is one of the best places to view the autumn foliage. The large precincts of the shrine are dotted with autumn leaves, but the depiction of Benzaiten at Genji Pond and the Kamakura National Treasure Museum are recommended as the best spots to view the autumn foliage.
Best time to visit: Late November - Early December
Visiting hours: 6:00 AM - 8:00 PM
[Video] 5:51 - Tsurugaoka Hachimangu Shrine, a Leading Historical Site in Kamakura

●Hasedera
Hasedera is a temple famous for its hydrangeas, but the autumn leaves are also exceptional. The temple grounds are illuminated from sunset at around 7:00 PM. Hasedera is the only place in Kamakura where you can enjoy illuminated autumn leaves.
The temple also has a Jizo statue with a cute smile. It's called Ryoen Jizo, and is said to bring good luck in marriage
Best time to visit: Mid-November to late December
Visiting hours: 8:00 AM - 4:30 PM
[Video] 6:45 - Hasedera, a Spot to View the Autumn Leaves

Enjoy Lunch and Sweets – Recommended Restaurants and Cafes When Sightseeing in Kamakura!

If you want to take a break from strolling through the autumn leaves, we recommend visiting one of the long-established shops or cozy cafes that are unique to Kamakura. Especially in the Kitakamakura area, you can find many stylish stores with a relaxed atmosphere.

Kissa Minka is a popular café in an old private house in Kitakamakura. Both the interior and the scenery outside the windows is lovely. The pudding on video is also, homemade, and there is also a menu for simple sweets, including things like French toast and coffee jelly, as well as curry and other dishes.
[Video] 2:20 - Kissa Minka, an old-fashioned café with a soothing retro atmosphere

Another place to try in Kamakura is Fujiya on Komachi-dori (Komachi Street). Fujiya restaurants are rare and not something you come across often. The sweets are perfectly balanced, and they also have an authentic Western-style menu.
[Video] 4:43 - Fujiya, a Restaurant With Sweets and Proper Meals

Nagon Shiruko (納言志るこ店), tucked away in an alley, is a long-established sweets shop known for its oshiruko (sweet red-bean soup). The interior of the shop, which is more like an old-fashioned store from Showa-period Japan than a café, is a strangely relaxing place. When the autumn leaves are in season, your body can get cold, so many people enjoy taking a breather with some warm oshiruko.
[Video] 5:22 - Nagon Shiruko, a long-established sweet shop in Kamakura

Kamakura, the ancient capital of Japan, is a fascinating place to visit in any season, but it's especially amazing during autumn. The colorful autumn leaves and the famous, historical temples and shrines are truly spectacular, and visitors can enjoy a breathtaking autumn season here. Enjoy a stroll through Kamakura in autumn for some picturesque photos.

まつだあゆみ（Matsuda Ayumi）
A write that was born in Hiroshima and moved to Tokyo after becoming an adult.
SUBSCRIBE