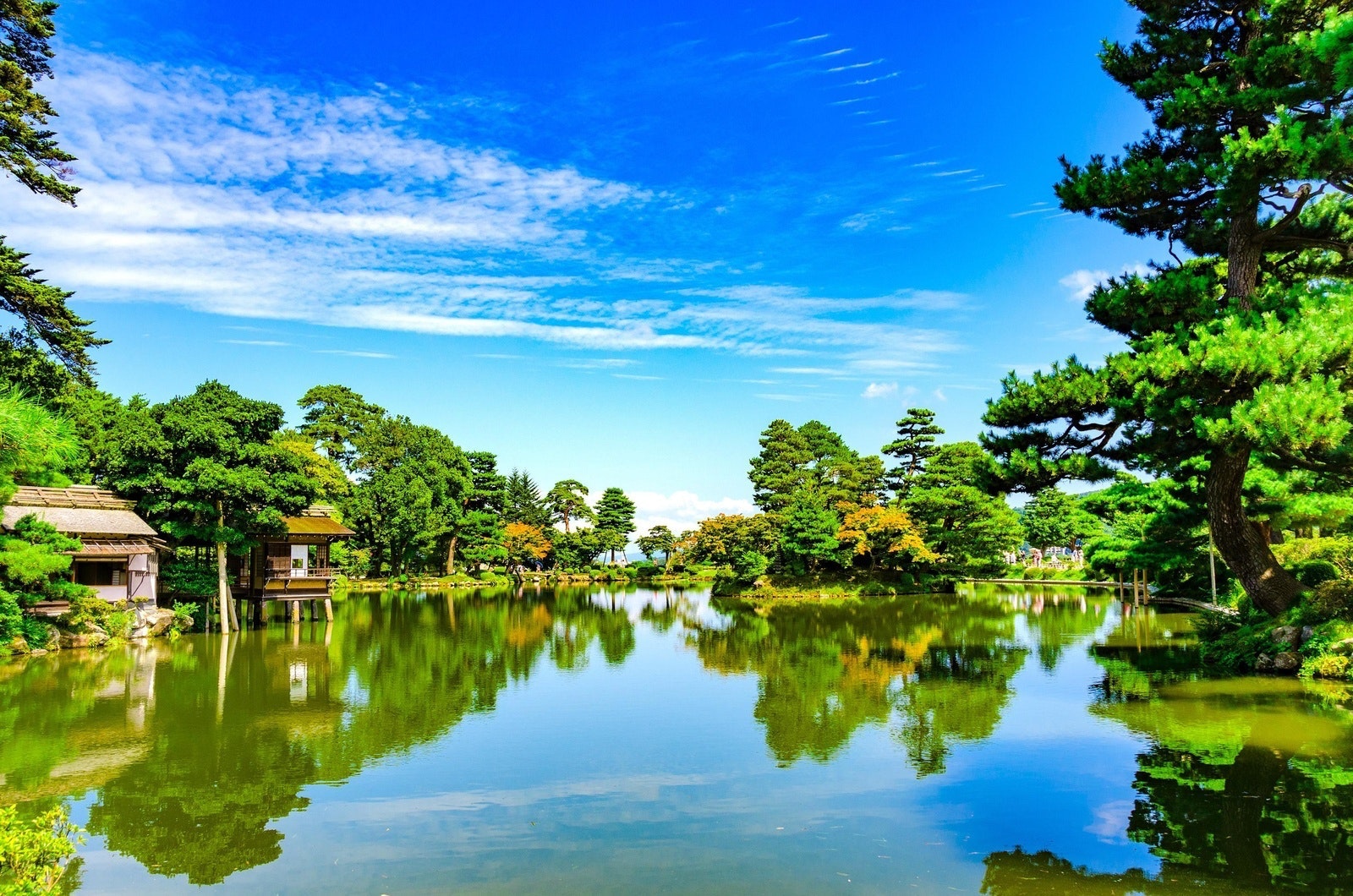 Kanazawa City, Ishikawa Prefecture in the Hokuriku area of Japan (北陸地方, hokuriku chiho) is a popular place for sightseeing.
The city is easily accessible, with Kanazawa Station linked to Tokyo Station through the Hokuriku Shinkansen.
The trip by shinkansen takes around 3 hours, making it possible to plan a one-day trip.

Kenroku-en Garden is one of the most popular sightseeing areas in Kanazawa.
The garden can be seen from 0:42 of the video.
The garden was built in 1676 by Maeda Tsunanori (前田綱紀), the feudal lord at the time. It was originally meant to be used as a villa.

On the grounds of Kenroku-en, you can see old-fashioned Japanese-style gardens.
In addition, the view in the gardens changes depending on the season.
In fact, Kenroku-en’s blooming cherry blossoms in spring have earned it a spot on the list of "Top 100 Cherry Blossom Areas of Japan."

When visiting Kanazawa, one spot you definitely don't want to miss is Kanazawa Castle.
The castle can be seen from 3:33 in the video.
It was built by feudal lord Maeda during the Edo period (1603~1868), and is ranked as one of "Japan’s Top 100 Castles."

Sadly, due to numerous fires in the past, much of the castle has been destroyed.
The current outer citadel and castle walls have been rebuilt, and work is ongoing to restore the rest of the castle to its former glory.

At the beginning of every year, the Kaga Hashigo Nobori (加賀はしご登り, kaga hashigo nobori), or "Kaga ladder acrobatics," is held.
This is a proud tradition with a history of more than 300 years.
The magnificent demonstration of traditional Japanese culture can be seen at 3:39 in the video.

This area can be seen at 1:00 of the video.
The Higashi Chaya District can be found in what was formerly the castle town of Kanazawa.
The district retains its Edo-period design and atmosphere, making visitors feel as if they’ve traveled back in time.

At night, the paper lanterns of the low-roofed wooden houses and former samurai residences light up beautifully, and you can hear geisha singing along to the music of the shamisen and Japanese drums.
Yukata and kimono rental shops are also available, making it possible for visitors to immerse themselves even more fully in the historical atmosphere while strolling around the district.
There are also many cafes and souvenir shops where you can eat or shop to your heart’s content.
The Higashi Chaya District is definitely a must-visit area.

The Festivals of Kanazawa City

Every year in June, the Hyakumangoku Matsuri (Festival) is held at Oyama Shrine.
The shrine is located right in the center of the city, and the festival is the largest in Ishikawa Prefecture.
The festival lasts for 3 days, drawing more than 4 million visitors annually.
It can be seen at 3:05 in the video.

The highlight of the festival is the Hyakumangoku Procession (百万石行列, hyakumangoku gyoretsu), a reenactment of the entrance of feudal lord Maeda Toshiie (前田利家, maeda toshiie) into Kanazawa Castle.
The magnificent procession is made up of 2,500 people, including locals dressed in Edo-period armor, Japanese drum performers, and falconers.

Besides the procession, there are also tea-drinking ceremonies and lantern-floating ceremonies as well, and the festival can be enjoyed by people of all ages.
The ethereal beauty of the lanterns floating on the water can be seen at 6:32 in the video.

Kanazawa City, also known as the "Kyoto of Hokuriku," is an area steeped in history reminiscent of the Edo period.
The city is also well-known for its traditional crafts, such as the Kanazawa-Haku (金沢箔, kanazawa-haku), Kutani ware (九谷焼, kutani-yaki), as well as Kaga-yuzen fabric dyeing (加賀友禅, kaga yuzen).