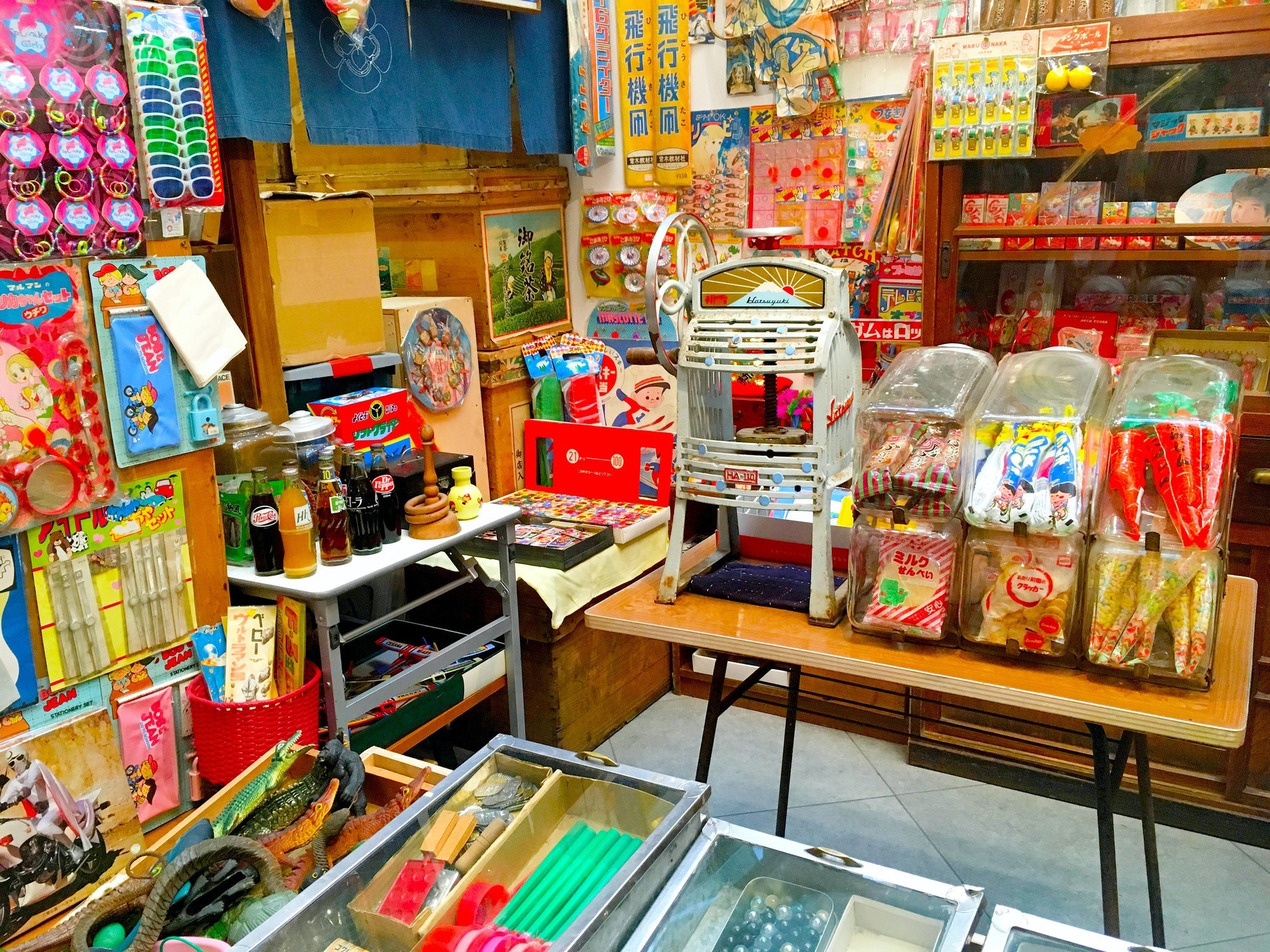 "Dagashiya" are something that many of those who were born in Showa era Japan are familiar with.
Dagashi are inexpensive snacks made and sold for children. They're essentially the equivalent of penny candy in the U.S.
Each product is small and sold in small portions, many of them costing only 5 to 30 yen each.
This makes it possible for children to buy them with their allowances.

Many of the snacks come with extras or winning "lottery" tickets, and if you ever experienced this kind of candy culture as a kid you know how much fun it was.
In this article, we take you inside Japan's "Dagashiya," the once popular hangouts for children.
Be sure to follow along with the video as it explores "Toda," a Showa retro dagashiya in Fukaya (深谷市, Fukaya-Shi), Saitama (埼玉県, Saitama-Ken), in Japan's Kanto Region (関東地方, Kanto-Chiho).

The History of Japan's Dagashi

Do you know where the name "dagashi" comes from?
It's actually a term that refers to all sorts of sweets made with unrefined brown sugar.
Since refined white sugar and granulated sugar were expensive raw materials back in the day, it's said that making dagashi started as an attempt to reduce the cost of materials as much as possible and to make snacks using unrefined brown sugar that common people and children could eat with a sense of security.
Because of this, dagashi became very popular among children, and it's said that during the Edo period (1603-1868 A.D.), many candy shops specializing in dagashi were established in various towns.

Variations on the term "dagashi" also increased, and it became common to refer to inexpensive sweets for children as dagashi, in addition to sweets made with brown sugar.
These are the roots of today's dagashiya shops.
Let's take a look at some traditional dagashi. ・Sendai-dagashi Nowadays, it's considered a high-class Japanese sweet, but in the Edo period, it was a popular snack for the common people.
Misopan (Miso bread) and karumera-yaki are typical Sendai sweets.

・Kuro-bo
A chunky textured, bread-like pastry made from flour, brown sugar, and eggs.

・Fu-chan
A kind of fugashi (dried wheat gluten coated with sugar made from sugarcane).

・Karume-yaki
Today, it's less common to see them at food stalls at festivals, but they're a type of dagashi with nice crunchy texture.
Karumera-yaki from Sendai is the same thing.

・Konpeito
A very venerable confectionary that even the Imperial family has a custom of distributing during celebrations.
As white sugar became more affordable, dagashiya stores began to carry it as well.

・Kyabetsu-Taro
A popular snack that is now sold in convenience stores as part of a renewed boom in dagashi.
There are a lot more popular dagashi, such as
・POTATO FRY
・Fruit-Mochi
・Tara-Tara-Shitenja-neyo (Fish paste chips)

The Dagashi Sold at Toda, a Dagashiya in Fukaya, Saitama.

The dagashi store in Fukaya, Saitama, shown in the video, has been run by one woman by herself since its opening.
The appearance of the store is that of a dagashiya that was a familiar place for children to hang out during Showa era Japan.
The store's name paint is now faded, and the red tent curtain on the roof, a symbol of a dagashiya, has also faded, but the entrance is lined with many gacha-pon machines, and the store is filled with nostalgic snacks, ice candies, toys, and stationery.
The world may change but this sweets shop keeps on doing what it always has - selling candy.

The video shows some of the most popular dagashi items that have been loved by children throughout the years.
For those in their 40s and older, these items are a reminder of the good old days!
They include Kamayaki Santaro, super ball lottery, medaka-chan game, candies, Maburu-gum, bubble gum, "Cola ball" (Coke Jell-O), yogurt, Choco-bat-Ace (home run bar), "lotteries" (if you win, you get snacks or toys), and more!

Summary of Japan's Dagashiya, the Once Popular Hangouts for Kids

From the end of the Showa period to the Heisei period, the dagashi industry temporarily declined, and the number of dagashiya stores decreased drastically.
Instead of dagashiya stores however, mass merchandisers (such as Niki's Confectionery, Kobe Bussan, etc.) that sell assorted dagashi in large quantities have become popular on retro shopping streets such as Ameyoko in Ueno.
This has sparked a revival in dagashi.

Besides these stores, self-service all-you-can-eat Dagashi-Bars or Dagashiya-Bar are also becoming popular.
In these bars, you can enjoy a wide variety of delicious snacks, such as okaki (rice crackers) and surume-ika (squid), which go great together with drinks.
In Kawagoe (川越市, Kawagoe-Shi), Saitama, there's "Dagashiya Yokocho" (Candy Alley) lined with dagashi manufacturers and wholesalers, making it a highly popular tourist spot in Saitama.
The popularity of dagashi is still strong online, and there are even dagashi stores that specialize in online shopping!
Consider experiencing the nostalgia of Showa Japan with the delicious dagashi of Japan's good-old days!