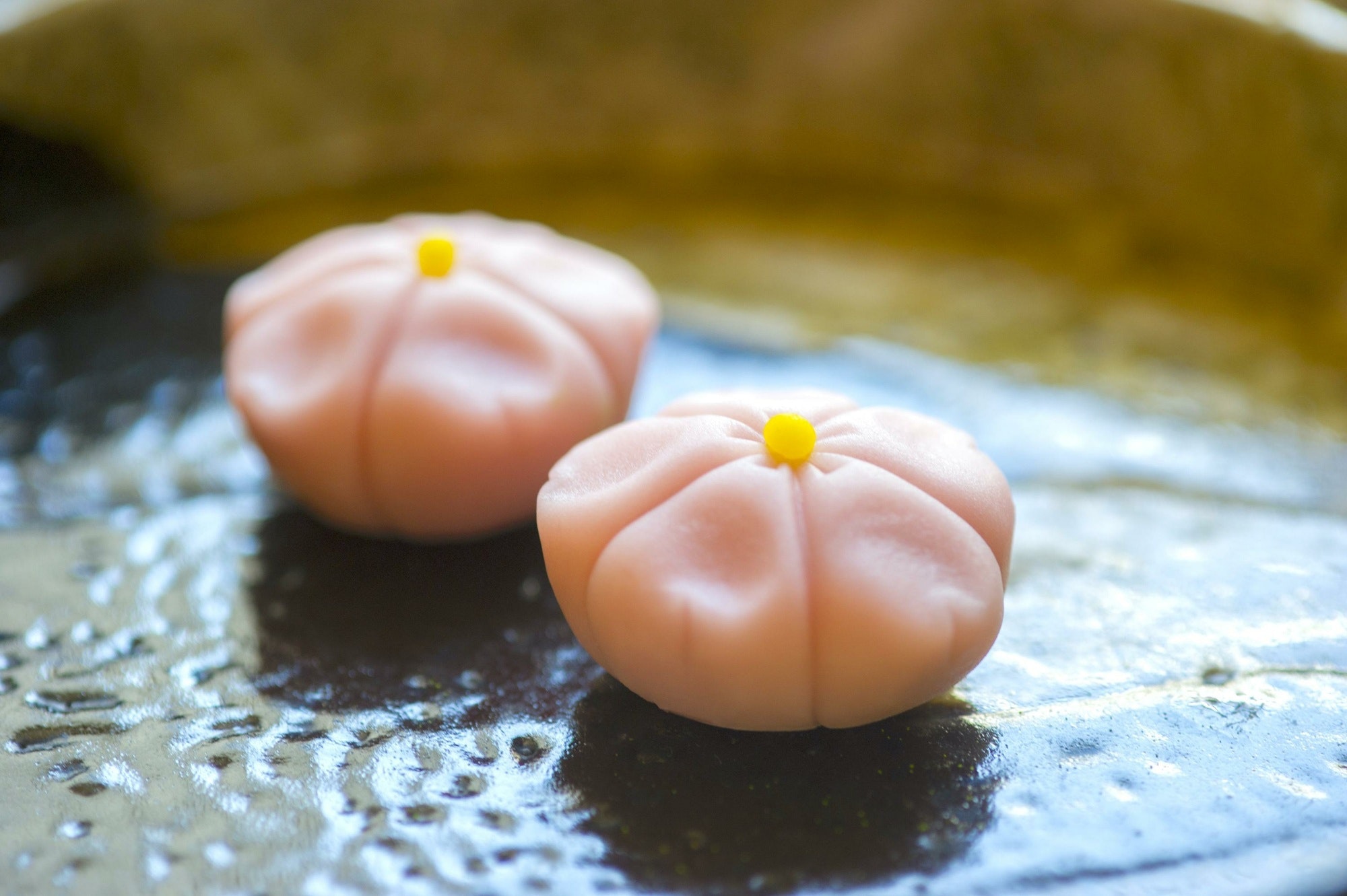 Kanazawa City in Ishikawa Prefecture was a castle town of the Kaga domain during the Edo Period, and the traditional Japanese sweets produced here are some of the best in Japan, on par with those produced in Kyoto (京都府) and Matsue, Shimane (島根県松江市).
There are three main types of Wagashi (traditional Japanese sweets): Higashi (干菓子), Namagashi (生菓子), and Jonamagashi. Of these three types of wagashi, Jonamagashi is thought to have played an integral role in the development of tea ceremony culture in Japan.

Kanazawa is a city steeped in culture and history, second only to Kyoto in Japan, and has a tradition of producing high quality, artistic Jonamagashi famously decorated with gold leaf.
A high level of skill is required to make Jonamagashi, which is what makes them so special amongst Japanese sweets.
They are a confectionary that appeals to all five senses and are a great way to celebrate the changing of the seasons.

The History of Jonamagashi and Tea Ceremony

Tea ceremony in Japan dates back to the Azuchi-Momoyama Period when it was systematized by Sen no Rikyu (千利休) who is considered the founder of tea ceremony.
It wasn't until the 1,700's, during the genroku portion of the Edo Period, that tea ceremony really spread throughout the rest of Japan, and Kanazawa is thought to be the birthplace of Noto (能登) Jonamagashi.

Tea ceremony is held based on a particular theme, and the tools used vary depending on the chosen theme. This is called "dougugumi" (道具組).
Wagashi are carefully selected and only those which complement the tools used in tea ceremony are chosen.
This is also taken into consideration when creating Jonamagashi, resulting in a variety of beautiful shapes and designs.

Artisan wagashi makers must channel all of their skills into the creation of one type of wagashi.
You can hear Ishikawa Prefecture Tea Ceremony Association representative Sosui Oshima (大島宗翠) speak more about the subject from 0:54 in the video.

Second generation wagashi maker Hironobu Yoshihashi of the well-established wagashi store "Yoshihashi" (吉はし), which has been in business for over 70 years, is featured in the video from 1:17.
Enjoy watching the skilled hands of the artisan wagashi makers.
Since Japan has a very warm and humid climate, a high proportion of sugar is necessary to preserve the wagashi.

However, in the past, sugar was a luxury product that could only be afforded by the rich and wealthy.
A great deal of thought and care is put into the taste, texture, design and feel of Jonamagashi.
Jonamagashi are often referred to as the ultimate wagashi, with an extremely high level of artistic quality.
From 1:58 in the video, you can take a look at Jonamagashi which have been designed to represent each month of the year.

From 0:45 in the video, you can see "Ajisai" (紫陽花), the most famous Jonamagashi.
This is one of the items available for purchase at Kanazawa's wagashi store, "Yoshihashi".
You can purchase Jonamagashi from Yoshihashi by ordering online before visiting the store.

Beautiful Jonamagashi from the wagashi store Yoshihashi are the perfect souvenir to take home from your trip to Kanazawa!
Jonamagashi are also a great way to enjoy the changing seasons, a treat which is pleasing for both the eyes and taste buds!