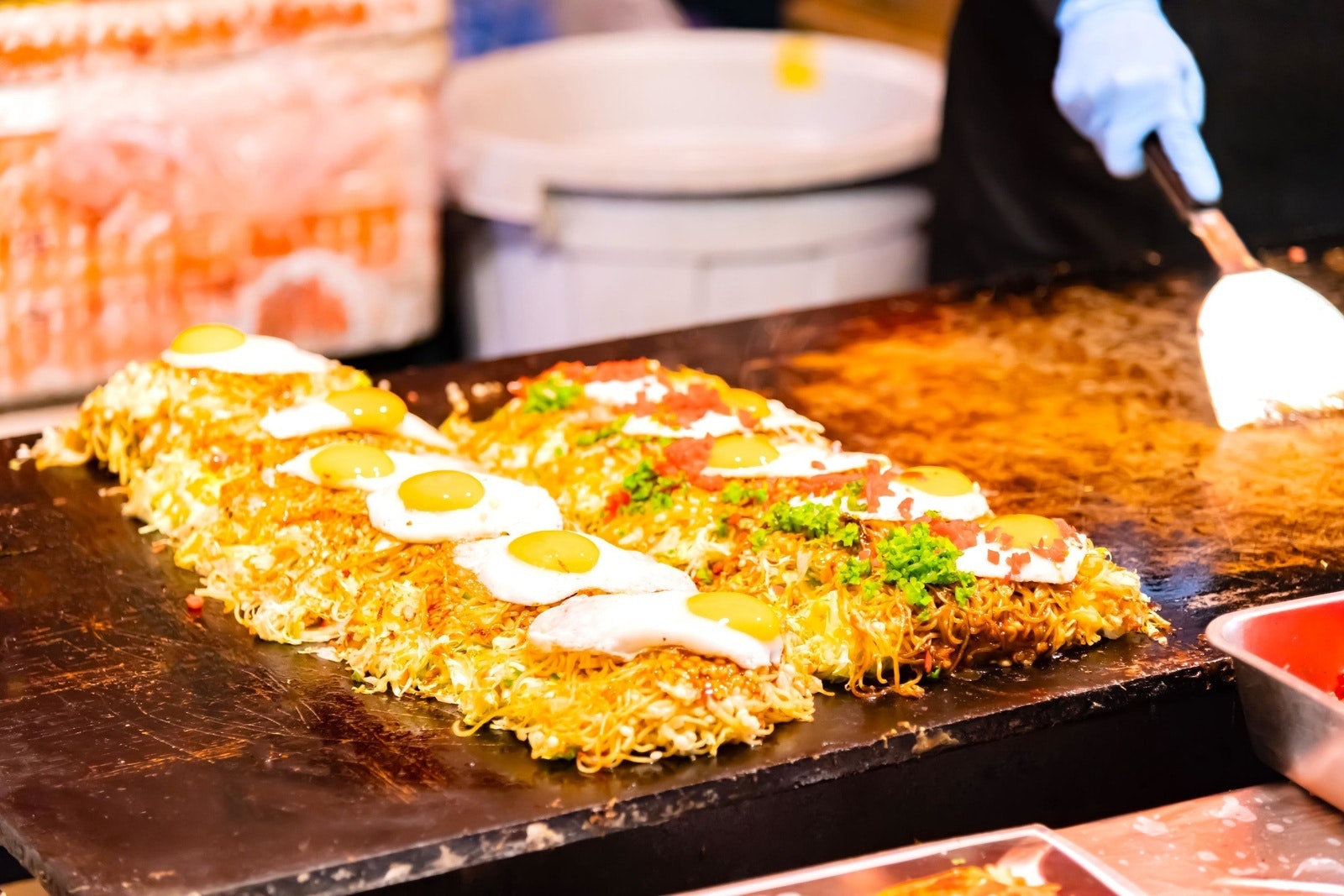 The Incredible Skills of Okonomiyaki Chefs

Many people are impressed by the amazing performance of making Okonomiyaki. Check out the video to see the quick hands of this chef as he prepares Kansai/Hiroshima style Okonomiyaki. The performance is quite impressive. You'll probably want to see it in person after watching the video.

What Kind of Food Is Okonomiyaki? Ingredients and How It's Made!

Okonomiyaki is a traditional Japanese food, and has been a soul food for many people for a long time.
Okonomiyaki was created in Tokyo sometime between 1926 and 1941. The recipe is very simple- You simply mix all the ingredients and cook it on a teppan (iron grill/skillet) or in a pan. Later on, the custom spread from Tokyo to the Kansai region. There are two kinds of Okonomiyaki: Kansai style (Osaka area) and Kanto style (Tokyo area). What you see in the video is called Kansai style Okonomiyaki.

Kansai style Okonomiyaki is made by mixing minced cabbage and batter together and cooking it on an iron pan. However, some people make it differently by flattening the batter on the iron pan and putting the cabbage on top. Modanyaki is a different type of Okonomiyaki that involves putting noodles into the mix. Modanyaki is also very popular in Japan.

The recipe is pretty simple. Use flour and water to make a batter, and mix it with minced cabbage and Yamaimo (Japanese yam). From there, cook the ingredients on the iron plate after greasing it with cooking oil, adding sliced pork, noodles, green onions, eggs, and other delicious ingredients. You can simply put whatever ingredients you like in Okonomiyaki. Some other popular ingredients are seafood, cheese, and mochi (rice cakes). Once you've finished making the okonomiyaki, season it with okonomiyaki sauce, fish flakes, and dried green seaweed. Many people prefer mayonnaise on their Okonomiyaki.

The most common way to eat Okonomiyaki is to cut it in small pieces using the spatula, so that it can be shared amongst friends. For the Okonomiyaki from a festival stall (like the one in the video), use chopsticks to cut the Okonomiyaki.

Takoyaki, and Monjayaki are 2 popular foods in Japan similar to Okonomiyaki. The video shows viewers the entire process of making Okonomiyaki, from greasing the iron plate, to flattening the batter and adding ingredients such as sliced pork and cabbage.

One of the most impressive scenes can be seen at 1:54, when the chef flips each Okonomiyaki one by one in quick succession. He's making 30 Okonomiyaki at once! Be sure to check out the video to see a detailed look at how Okonomiyaki are made.

No festival is complete without getting some food at a local stall. And the taste of freshly made okonomiyaki from a stall is totally different from what you'd make at home. There are actually a lot of tourists who visit Japanese festivals just to enjoy different foods and see the amazing skills of the chefs.

In this video, we showed you the craftsmanship of the Kansai-style and Hiroshima-style okonomiyaki attracting large crowds. This Okonomiyaki stalls are very popular and often attract large lines of people. Don't be surprised when you're not the only one excited to buy this delicious treat.

Trying different food at festival stalls is an inseparable part of Japanese festival culture. There are a lot of different food stalls at Japan's festivals where you can see the professional skills of chefs.
The amazing skills of Japan's Okonomiyaki chefs is a must-see!