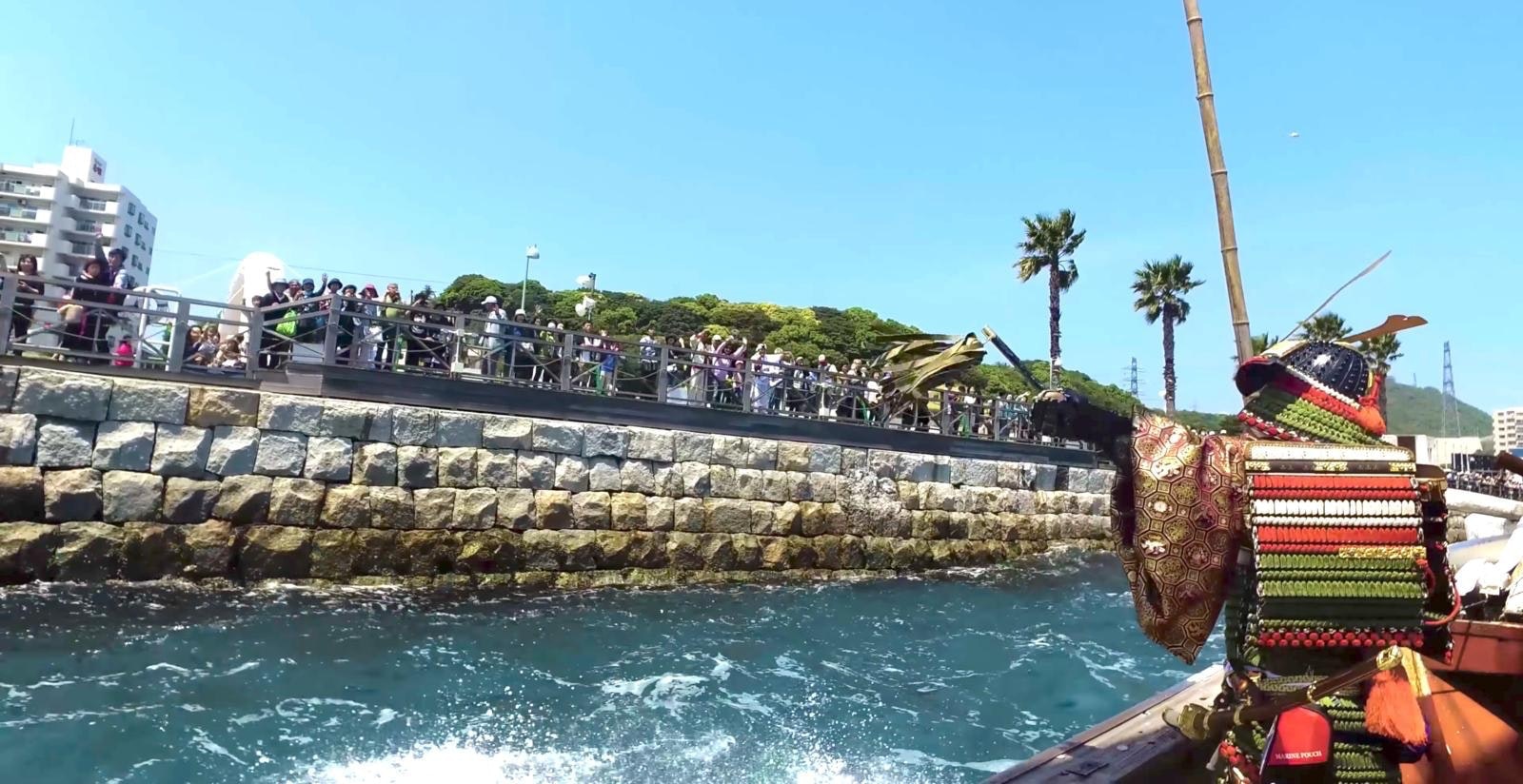 The Shimonoseki Straits and Genpei Festivals

This video, titled "The Official Video of the Genpei Festival - Shimonoseki Straits Festival" )【公式】しものせき海峡まつり 源平まつり), was released by the city of Shimonoseki.

Located at the westernmost tip of the Main Island, Shimonoseki in Yamaguchi Prefecture features a historical site where the famous sea battle "Dan-no-ura" occurred in 1185.
At the Shimonoseki Straits Festival, annually scheduled from May 2nd-4th, performers with authentic clothing produce a surreal sight, as if the illustrations from the ancient scrolls are coming to life before our very eyes.

The highlight of the festival is "Genpei Festival" on May 3 held at Kanmon Straits where the famous sea battle occurred.
The warriors' parade, the reenactment of the sea battle of Dan-no-ura, and the archery battle between the warring clans (one scene from Studio Ghibli's Pompoko explicitly references this battle), and Senteisai (loosely translated as the "former emperor festival" and is held to commemorate the child Emperor Antoku who drowned at Dan-no-ura), attract a great number of onlookers.
The video leads us over to the city where performers wearing the medieval costumes fill the streets.
Enjoy your journey back in time through the video!

The Genpei Festival is preceded by "Senteisai", where a ritual is held to offer prayers to the shrine in order to appease the soul of Emperor Antoku's.
Samurai, courtesans, and adorable child soldiers are separated into the Genji and Heike clans and parade throughout the city.

From 0:09, the video allows us a glance at the elaborate preparation process that turns the performers into historical characters, and at 1:26the parade begins.
The parade depicts the two warring clans marching to the battlefield.
The vigorous war cries of the warring clans captivate onlookers.

The Reenactment of the Famous Sea Battle

From 1:37 is the majestic reenactment of the climatic sea battle.

The presence of historical characters such as the legendary monk warrior Benkei, the heroin Shizuka Gozen, and the child Emperor Antoku on the boats portraying the scene, energizes the event.
The spectacular reenactment, with a fleet of about 200 ships sailed out on the wild waves, will definitely look great on Instagram.
A series of events associated with the Genpei war take place on the main stage and the dance of the 5 gorgeous courtesans closes the performance.
The main stage performances are introduced from 3:00.

Festival performers are chosen from the public submissions.

Summary of the Shimonoseki Straits and Genpei Festivals

The video guides us through the Shimonoseki Straits Festival where one can experience one of Japan's most historically significant events.
Enjoy time traveling back to the 12th century with this video!

The main venues at the Genpei Festival are the Akama Shrine and Shimaitoshi Square.
Transportation is blocked at some parts of the city during the festival, so we recommend checking the event schedule in advance if you're planning on using it.