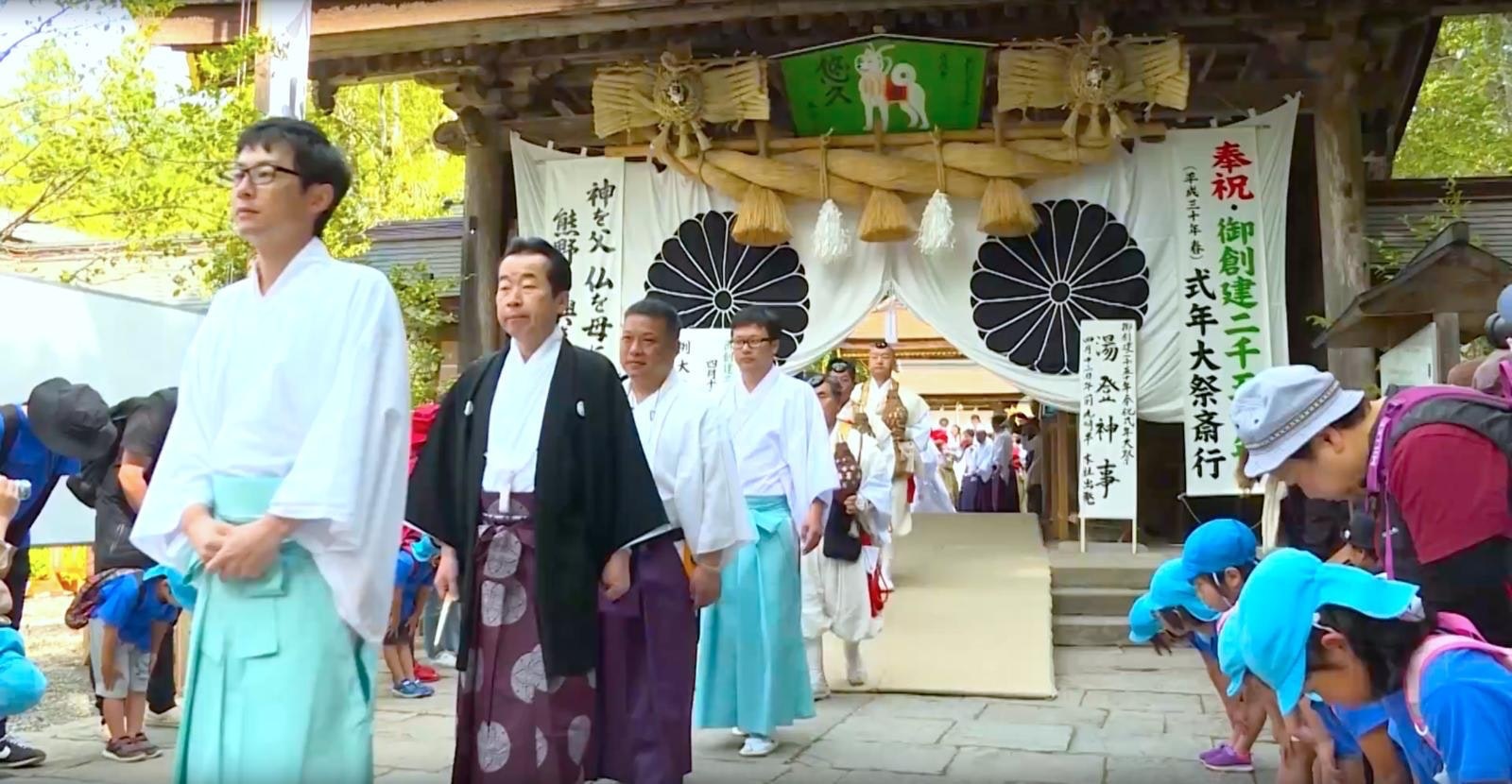 Kumano Hongu Taisha was built more than 2050 years ago, and Yunobori Shinji, the largest annual shinto festival, has been designated as an Intangible Folk Cultural Property of Wakayama Prefecture.
This video introduces the "Kumano Hongu Taisha Reitaisai Festival" of Wakayama prefecture.
If you ever wonder what kind of sacred rituals and events are held in the festival, take a look at the video and this article.

The "Kumano Hongu Taisha Reitaisai Festival" is held for three days from April 13th to 15th every year. The festival starts with the events "Yunobori Shinji" and "Miyawatari Shinji."
Starting at 0:07 in the video, it shows one aspect of the ritual where people invoke the spirit of the gods into children after they've purified themselves in the sacred water of Yunomine Onsen during "Yunobori Shinji."

During the festival, the children are only allowed to put their feet on the ground while in the ritual so their fathers or brothers carry them on their shoulders and hike through 3.4 km of mountain trail called the "Kumano Kodo pilgrimage routes" to get to "Oyunohara."
In the afternoon, there is the traditional performance by the children called the "Yasabaki Shinto Ritual" at Yunomine Ouji which is shown in the video around 0:44.
After that, the children, a Kannushi (a person responsible for the maintenance of a Shinto shrine), and people with musical instruments line up and head to “Otabisho.”

The event called Funatama Taisai (船玉大祭) and the eve of the main festival are held at Kumano Hongu Taisha on April 14th.
As shown in the video around 1:15, the most important event, the Hondensai (本殿祭), and the Togyo Festival (渡御祭) in which 400 people dressed in Heian style clothing for the performance participate in, are held on April 15th.

A procession that recreates Kumano Gokou then heads to Oyunohara to perform sacred dances such as "Yamatomai" and "Mikomai."
In the “Hondensai,” there is the "Togyosai" festival and the "Kangyo Sai" festival where you can see the Mikoshi (a portable shrine) with the flowers from "The deity of Kumanomusumi" (熊野牟須美神) (The god enshrined in Kumano Sanzan).
It is said that the gods are pleased by the decorating of the Mikoshi with flowers and the swinging of the mikoshi.
Starting at around 2:32, the video shows children praying for a good harvest.
The festival is called "Ondasai" (御田祭, Ondasai).
The video also shows the events "Gomadaki" (護摩焚き, Gomadaki) performed by monks, "Mochinage" (throwing rice cake), "Saitodaigoma" (採燈大護摩, saitodaigoma) and "Tamagushi Houten" (玉串奉奠, tamagushi Houten).
which are also fun to see.

Towards the end of the festival, when the sun starts to go down, people walk out of the Torii gate of "Ooyunohara" and make their way back to the shrine.
After that, the last festival, "Kangyo-sai," is held (3:49).

If you're looking to enjoy the atmosphere of Japan's shrines, Kumano Hongu Taisha is the perfect place to visit.

Repair work was also undertaken in 2012 to commemorate the 120th anniversary of the shrine being transferred to its current location.

There are many hotels and Ryokan (Japanese style inn) in Tanabe City in Wakayama, near Kumano Hongu Taisha.
You can have a great time feasting on the local cuisine during your lunch break. You can also go shrine hopping with your Goshuin notebook when the weather is nice.