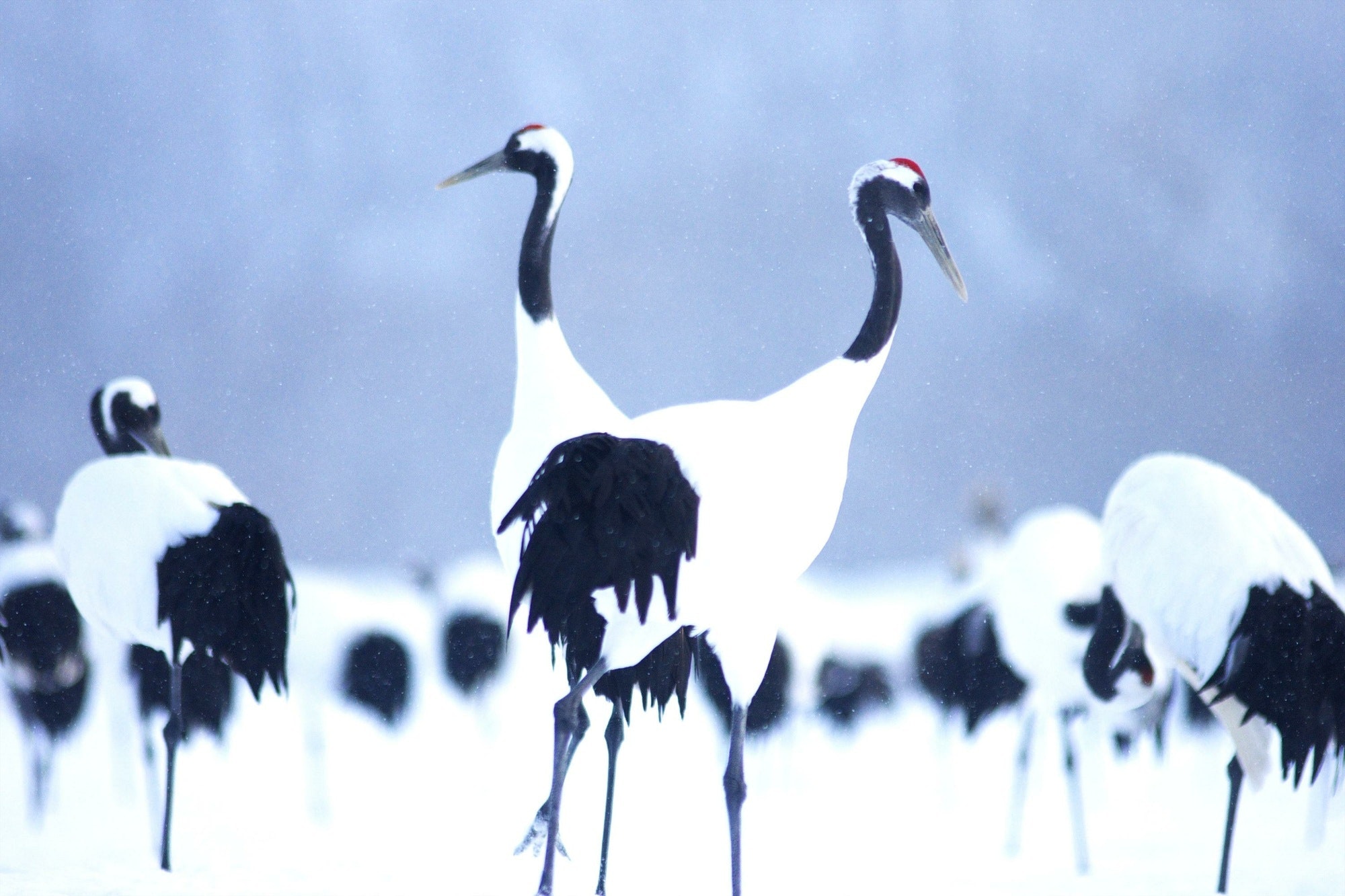 Beautiful Japanese scenery! The Dance of the Red-crowned Crane!

The red-crowned crane is a member of the Cruiformes order, Gruidae family of birds, and is known as a migratory bird; however, there are some non-migratory red-crowned cranes in Japan that can be found in the east of Hokkaido all year round.
The elegant looks and majestic appearance of the red-crowned crane as it spreads its wings, make it a very popular bird. A fully-grown adult's wing span can reach over 2 meters, and they are the largest wild bird in Japan).

The crane is probably the most well-known example of origami and the crane can also be seen in many other Japanese designs.
The most famous of which are the 1000 yen note and the Japan Airlines logo.
The red-crowned crane's dance can often be seen in winter as this is the start of the mating season.

From 00:36 in the video, you can see a pair of red-crowned cranes dance while matching their calls. It’s a beautiful and magical sight.
They way in which they spread their wings and jump around each other is very mysterious.
Please enjoy the rare and precious footage.

Where Are the Largest Breeding Grounds in Japan?

The ecology of the red-crowned crane is still shrouded in mystery.
However, it is known that there are red-crowned cranes inhabiting both the north-eastern area of Eurasia and also the Kushiro wetlands (釧路湿原, kushiroshitsugen) of Hokkaido.
They are omnivorous, feeding on mainly insects, fish, and seaweed found in freshwater.
Due to these feeding preferences, they can often be found inhabiting wetland marshes, lakes and rivers.

When winter comes around, mating couples are formed and families gather to pass the winter together.
The majority of red-crowned cranes choose to spend the winter in China or the Korean Peninsula although it has been confirmed by the Wild Bird Society of Japan and the Ministry of the Environment that some do remain in Japan for the winter.

The nonmigratory red-crowned cranes endemic to Japan are known to have a different sounding call to the introduced species.
Until they were rediscovered in the Kushiro wetlands in 1924, it was thought that this endemic species had become extinct. In 1967, the red-crowned crane was designated a protected species in Japan and to this day the dance of the red-crowned crane remains the highlight of winter sightseeing in Hokkaido.

The average height of the red-crowned crane is 102-147 cm and they can weigh anywhere from 4 kg to over 10 kg.
They are covered in white feathers, with black feathers covering the area surrounding the eyes down to their neck and also the tips of their wings.
The top of their head has no feathers and instead exposes a bright red patch of skin which is their distinguishing feature.
During the breeding season their territory can cover an area of 1-7 square kilometers.
They build nests mostly in marshy grasslands, by the waterside or shallows in order to lay their eggs and bring up their offspring there.

The Japanese name for the red-crowned crane, "Tanchouzuru," comes from the word "Tan" which means red and refers to the red patch of exposed skin on the top of their head.
According to Japanese literature, they were mentioned as far back as 1133 in the "Shijoshuu" and often appear in Japanese fairytales and folklore.
Although the red-crowned crane has inhabited Japan for hundreds of years, there is still little information on things such as their average lifespan, the difference in appearance between males and females, and why the cranes that inhabit Japan are nonmigratory.

Summary of the Red-crowned Crane

Currently, local governments in Hokkaido are fighting to protect the red-crowned crane with activities such as actively feed them during harsh times, such as in the middle of winter.
Thanks to their efforts, the numbers of red-crowned cranes in Japan is steadily increasing.

It's said that the Japanese species of red-crowned crane can be distinguished from the Siberian species that was introduced to Japan by differences in the sound of their calls.
You can enjoy listening to their beautiful call and seeing their dance from 00:36 in the video.