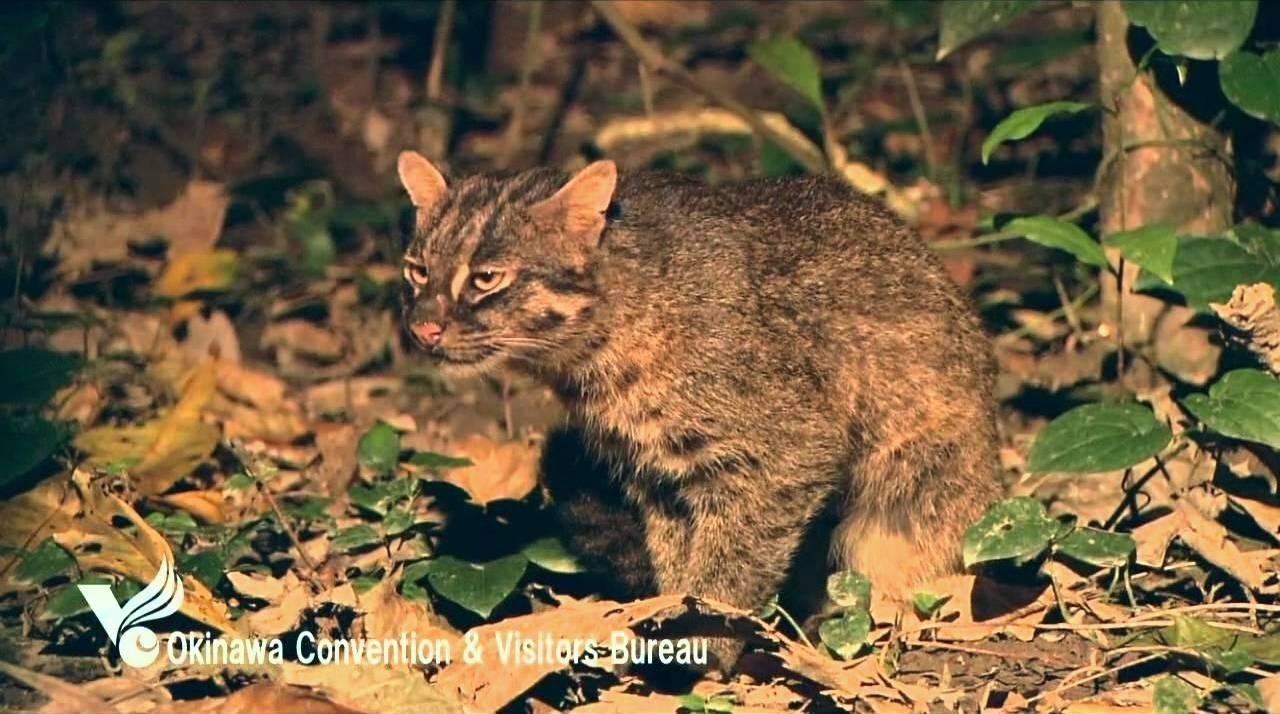 This video, "Iriomote cat," was created by "okinawastoryMediaLib," and features special footage of the rare and endangered species- the Iriomote cat.
In this article, we bring you facts and information on the ecology of the Iriomote cat, a subspecies of the Leopard cat.

From 00:24 in the video, you can see the carnivorous Iriomote cat search for and successfully find food amongst the fallen leaves.
The Iriomote cat looks different from a domestic cat in several ways: it has round ears with a cloudy white mark on its back (a feature found in many wild cats), a thick, bushy tail, its fur has a spotted pattern, and the area surrounding the eyes is white in color.
Take a look at the unique features of the Iriomote cat in this video!

The Iriomote cat, native to Iriomote Island, is often referred to as Yamapikarya or Yamamaya by the locals.
The call of an Iriomote cat sounds similar to that of a domestic cat, however they rarely cry.
Unfortunately, the number of Iriomote cats is decreasing and there are thought to be only around 100 cats remaining on Iriomote Island.

In 1965, when the Iriomote cat was first discovered on Iriomote Island, it was thought to be a new species.
However, research has categorized the Iriomote cat as a member of the genus Prionailurus, family Felidae.
Other than the domesticated cat, the Iriomote cat of Iriomote Island and the leopard cat (scientific name: Prionailurus bengalensis euptilurus) of Nagasaki prefecture's Tsushima Island are the only two known cat species to inhabit Japan.
Iriomote cats are nocturnal animals who live in the mountain forest.
Outside of breeding season they tend to live a solitary life.
The average weight of an Iriomote cat is 3-4kg, with an average height 50-60cm, and an average life span of 7-8 years in the wild.
They have a varied diet that consists of small mammals, birds, reptiles, frogs and insects.

The breeding season is from February to April during which time they stick to their territory avoiding potential rivals (other members of the same sex).
Unfortunately, the survival of the Iriomote cat is under threat from the continued development destroying their habitat, traffic accidents, and contagious diseases.

There are no zoos or facilities that breed or raise Iriomote cats.
However, the Iriomote Wildlife Conservation Center strives to protect the Iriomote cat and at the facility you can learn about the rare cat through various materials, documents, and even stuffed animals.
You can also purchase cute Iriomote cat plush toys, T-shirts, and other Iriomote cat related goods at the Iriomote Island Tourist Center.

Summary of the Iriomote Cat

Please take a look at the beautiful Iriomote cat in this video as it's incredibly rare to catch a glimpse of this endangered species in the wild.
From 3:51 in the video, you can even see some rare footage of the Iriomote cat climbing a tree.

We hope you enjoyed watching this precious footage of the Iriomote cat!