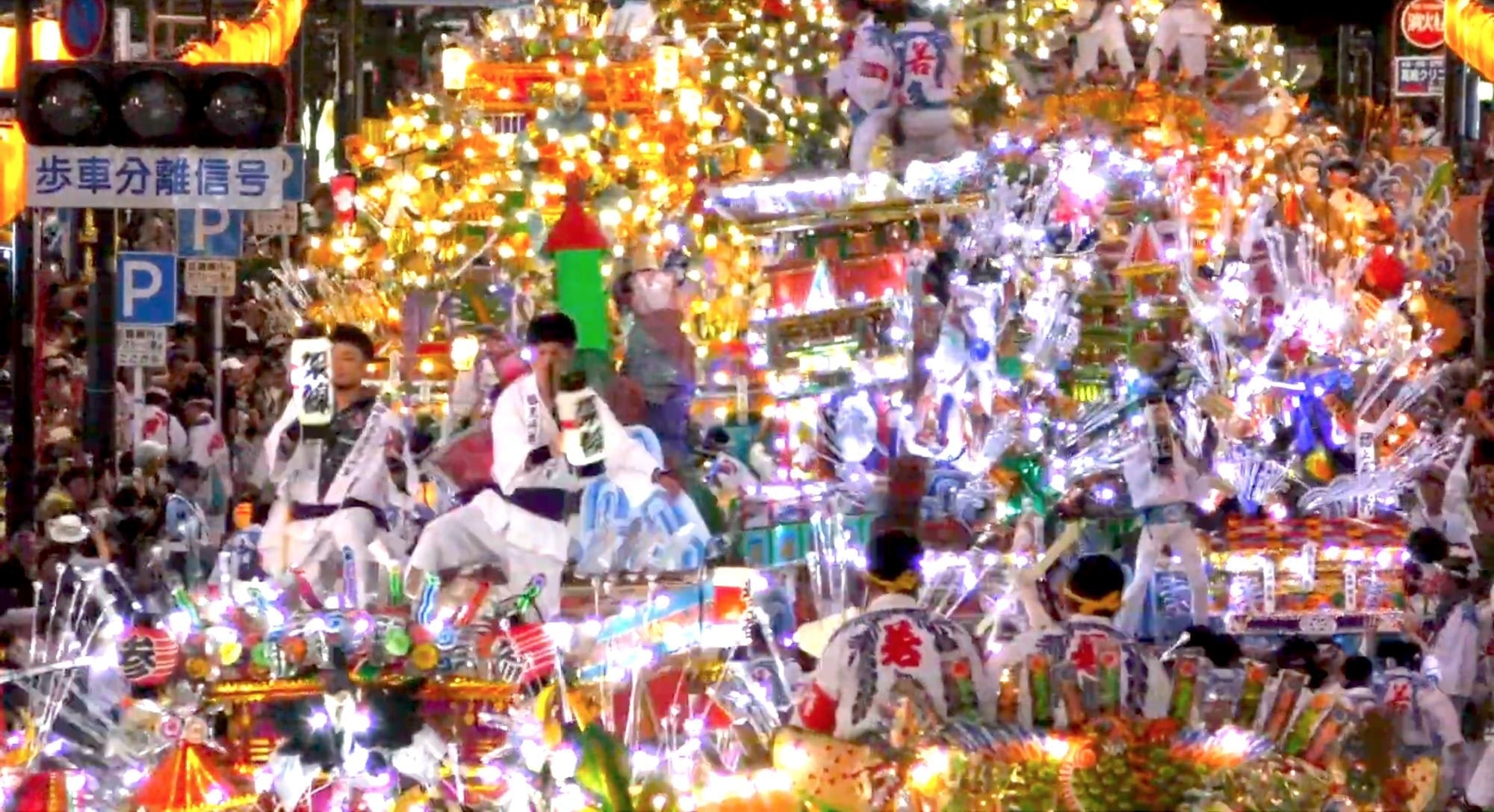 In this article, we will introduce the video "50 Years of Kurosaki Gion Yamakasa（黒崎祇園山笠 50年の歩み）" released by "Yahata Nishi Ward Office Official Video Channel".

There are many festivals derived from the Kyoto Gion Festival in Japan, including the Kurosaki Gion Yamakasa in Fukuoka Prefecture, introduced in this video.
The historic Kurosaki Gion Yamakasa is counted along with Tobata Gion Oyamakasa and Ogura Gion Taiko in the “Kitakyushu Three Great Gion Festivals” and is designated as a Fukuoka Prefecture Intangible Folk Cultural Property and celebrated its 50th anniversary in 2018.

The Kurosaki Gion Yamakasa festival in Fukuoka, introduced in the video, is a historic festival in Kitakyushu city, which has been held for over 400 years.
In 1605, during the Christian era, Nagamasa Kuroda ordered the Kurosaki Castle owner, Yukifusa Inoue, to build Okadagu Kasuga Shrine.

This festival dedicated to the Okadagu Kasuga Shrine is the origin of Kurosaki Gion and has been inherited as the Gion Festival of "Ichinomiya Shrine", "Okadagu" and "Kasuga Shrine".
You can see the origin of the Kurosaki Gion Yamakasa festival from 0:49 in the video.
Kurosaki Gion Yamakasa begins at the beginning of July with a ceremony of the Oshioi-tori that purifies floats with seawater for the sake of safety in Gion. This is introduced at 1:57 in the video.

Next, is the SasaYamakasa that can be seen from 2:13 in the video. This practice is still inherited as an important traditional event.
Decorative Yamakasa, which can be seen from 2:28 in the video, are puppets that are placed on floats by puppeteers to decorate them according to the theme of each year.
The music of Kurosaki Gion consists of large drums, small drums, bells and conchs, and the rhythm incorporates the battle drums of the battle of Sekigahara.
Gion Taiko is brave and encourages the hearts of people and inspires them.

The main event of the festival is the city cruise, where you can see the “Mawashi-Neri” that spins the floats. This can be seen at 1:50 and 6:22 in the video.
In addition, there are plenty of other spectacular events such as the Kurosaki Gion Yamakasa competition where Yamakasa compete for victory, as well as the Taiko Competition.
Both are competitions you won't want to miss!

The Different Floats of the “Kurosaki Gion Yamakasa” Festival

In 2012, Tamachi Funamachi Yamakasa joined the service for the first time in 64 years. Also, in 2013, SasaYamakasa participated in commemorating the 50th anniversary of Kitakyushu's municipal organization.

The floats are illuminated with lights, and are more colorful and brilliant when the sun goes down, as you can see from 7:58 in the video.

Kurosaki Gion Yamakasa has also made appearances in festivals in other regions has expanded overseas.

In addition to the Osaka Midosuji Parade, it has also bee na part of the Hawaii Aloha Week Festival, Hong Kong New Year Parade, and the 2016 Korea Communications Festival, all of which are introduced starting at 5:46 in the video.

Of course, during Kurosaki Gion, there are also food stalls along the roadside, and it is full of many tourists.
There are traffic restrictions on the day, so it is recommended that you collect enough information on the official website before going out.