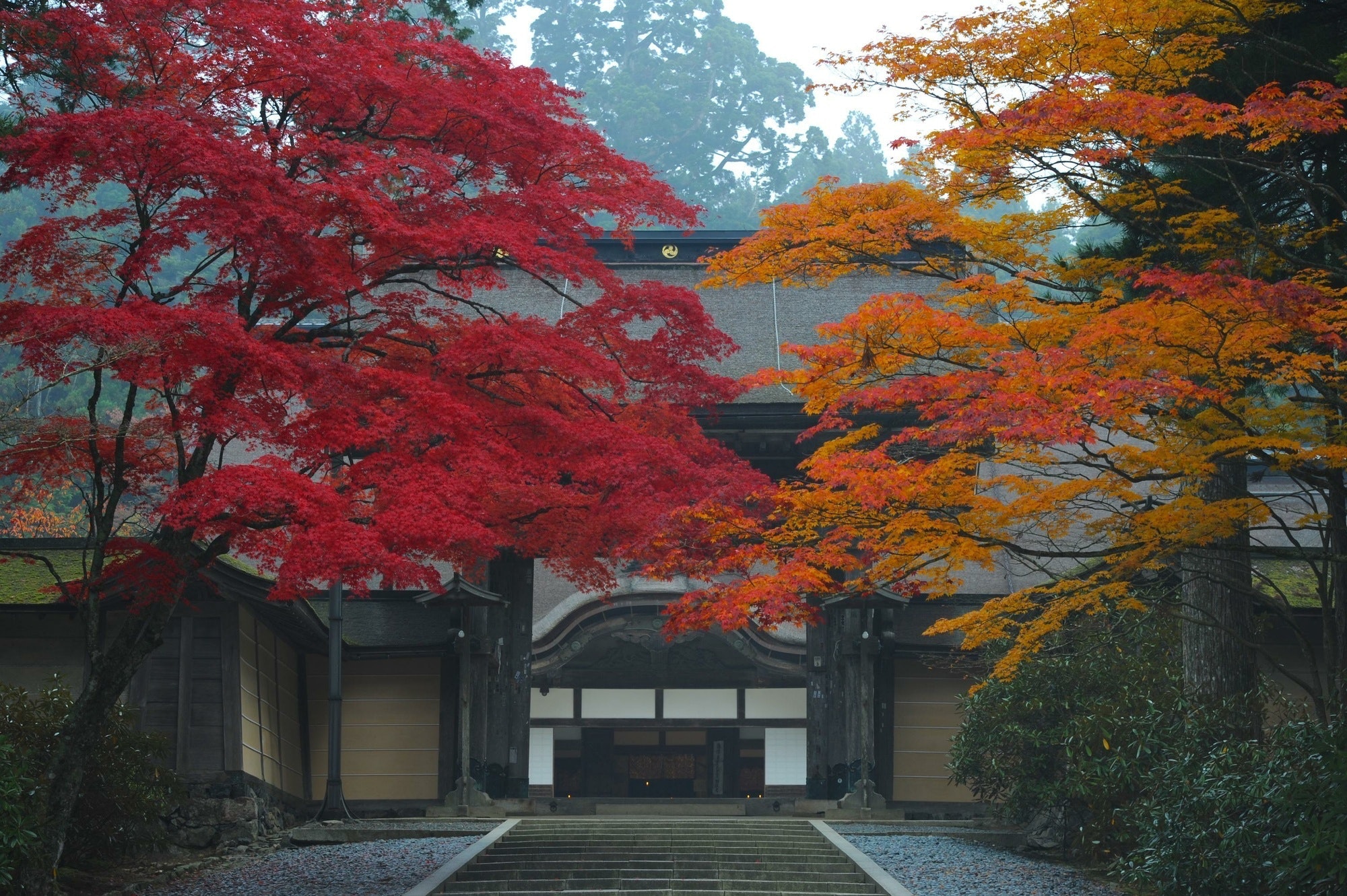 During the Heian period (794-1185), the monk Kobo Daishi (Kukai) founded a religious city on Koyasan (Mt. Koya) in Wakayama Prefecture.
Kongobuji Temple, located in the city, is the head temple of the Shingon Buddhism sect, and has been designated as a UNESCO World Heritage Site under Sacred Sites and Pilgrimage Routes in the Kii Mountain Range.
You can learn more about the temple through this video.

The History of Kongobuji Temple

From 0:15 in the video, you can see a stunning view of the temple bathed in autumn foliage.
A view like this can hardly be done justice even in 4K resolution.

The history of Kongobuji Temple goes all the way back to the year 835 during the Heian period, when the monk Kukai first entered Koyasan.
After working hard to study Buddhism and receiving the posthumous name of "Kobo Daishi," he founded Kongobuji Temple on the mountain.
Gradually, the area developed into a religious city.
Visiting the temple now, you can view the Main Hall, as well as the main shrine housing the principal deity.

Banryu Garden (蟠龍庭, banryu-tei), shown from 2:45 in the video, was created using beautifully shaped granite from the Shikoku region of Japan.
This is one of the largest rock gardens in Japan.
In addition, you can view the fusama paintings of the Nihonga painter Hiroshi Senju, and even get a shuin stamp in their likeness.

Other Attractions on Koyasan

Besides Kongobuji Temple, there are many other Buddhist temples and pagodas, such as the Konpon Daito Pagoda (根本大塔).
Incidentally, the name "Head Temple Kongobuji Temple" refers to the entirety of Koyasan. The Main Hall of Mount Koya is known as "Kondo Hall" (金堂, lit. Golden Hall).
There are also smaller temples scattered around the mountain, known as "Tachu" (塔頭).
If you stay overnight in the temple lodgings, you'll be able to try some Buddhist vegetarian cuisine, known as shojin ryori (精進料理), experience morning prayer rituals, and take your time visiting the numerous Buddhist statues on the mountain.

By train, the most convenient route is to take the Nankai-Koya Line (南海高野線, nankai koya sen) from Namba Station (難波駅, nanba-eki) in Osaka to Gokurakuji Station (極楽寺駅, gokurakuji-eki).
From there, take the cable car to Mount Koya.
By car, the mountain is accessible via the highway.
Parking is available at Koyasan, but due to the high possibility of crowds during holiday seasons, it's generally more convenient to use public transportation.

Koyasan in Wakayama Prefecture is not only a World Heritage Site but also a world-famous tourist destination.
After watching the video of Koyasan, don't you feel the urge to visit and see the sights in person?
By the way, Koyasan is 800m above sea level, leading to cool temperatures in the evening even during summer.
Because of this, we recommend wearing warmer clothing when visiting the mountain.