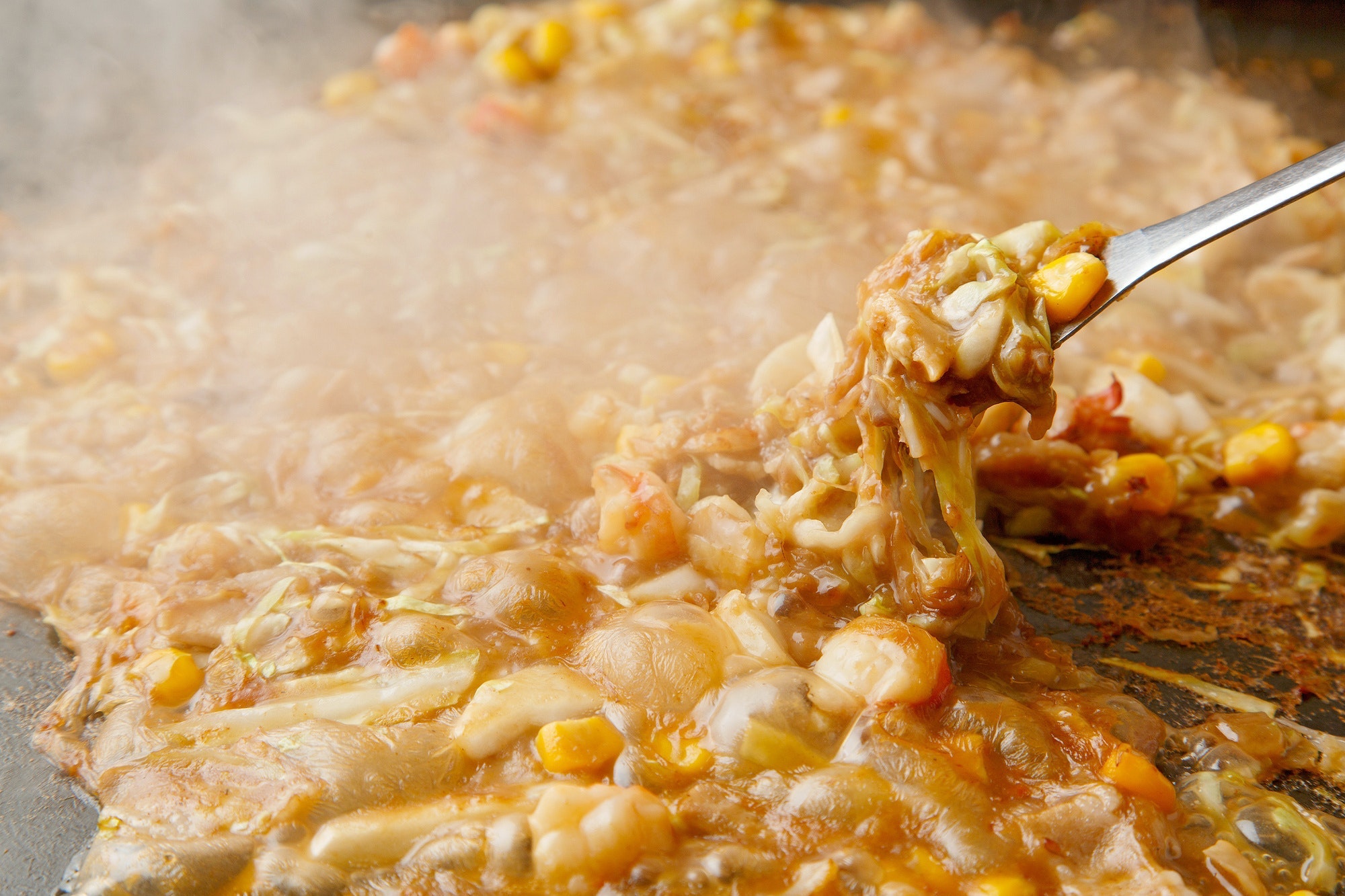 This video, titled "How To Make 'MONAJAYAKI' With Spicy Caviar - Japanese Street Food," was uploaded by Ante.
It introduces monjayaki, a soul food of Tokyo.

Monjayaki is a local food in the suburbs of Tokyo where the delicious pancake-like food is cooked over a teppan.
Monjayaki is similar to okonomiyaki, but it's characterized by the fact that it does not solidify on the griddle after being heated.

Monjayaki was originally loved as a snack by children.
However, over time, more and more ingredients were added, and it became a popular dish among adults as well.
In this article we’ll introduce monjayaki!

How to Make Monjayaki

In this article, we'll show you how to make monjayaki by following the video of the traditional Tsukishima Monjayaki restaurant "Kondo," which has been in business for 70 years.

Start by oiling a hot teppan, as shown at 0:06 in the video.
Then, put finely chopped vegetables, the flour and water mixture, and your favorite ingredients, such as tenkasu, on the griddle.
The most popular toppings for monjayaki are mentaiko (spicy cod roe), mochi (rice cakes), cheese, baby star ramen, boneless pork rib, kimchi, beef tendon, corn, squid, and sakura shrimp.

Open the middle of the ingredients and make a ring of cabbage around it to form a bank.
Place the mentaiko, the main ingredient, in the open space in the middle.

It takes less than three minutes to complete, so if you're looking for a quick, delicious snack, then monjayaki is the way to go!

You can eat it with chopsticks, but when it comes to monjayaki, eating it with a small spatula and pairing it with beer or other alcoholic beverages is the most common way it's enjoyed among adults.

Another popular way to eat it is to grill sausages and butter corn with soy sauce on the griddle together, as can be seen at 3:25 in the video.

1. Popular Monjayaki in Tokyo
There are many long-standing monjayaki restaurants in downtown areas such as Sumida, Koto, Daito, Katsushika, Adachi, and Arakawa.
The most famous tourist spots are Tsukishima (Kondo) in Chuo, Tokyo, and Asakusa in Taito, Tokyo.
Nishinaka-dori in Tsukishima, Chuo, Tokyo is often called "Monjayaki Town" and "Monja Street" and is typically crowded with tourists.

2. Monjayaki in Gunma
Besides the usual cabbage, monjayaki in Gunma is characterized by its small amount of ingredients and the fact that it's seldom cooked.
It's even said by some that monjayaki originated in Gunma Prefecture, where udon flour, which was left over from the production of udon, a local specialty, was mixed with water and then grilled.
In Isesaki, in the southern part of Gunma Prefecture, the origin of Isesaki's monjayaki is said to be when children mixed udon flour and water, added soy sauce, and grilled it on a teppan as a snack.

3. Ashikaga Monjayaki in Tochigi
Monjayaki in Ashikaga, Tochigi, is similar to monjayaki that can be eaten at snack shops. It's made of flour and water only, with a very watery material, and is cooked thinly like a crepe.
Leftovers are sometimes left to harden before being eaten as "senbei."

There's an illustration of something called "Monjiyaki-ya" (文字焼き屋) in the Hokusai Manga published in 1819, and it's believed that monjayaki had already existed by the Edo Period (1603-1868 AD).
There are many theories about the origins and roots of the historical dish, but the fact remains that Japanese people love monjayaki and various kinds of monjayaki have been created all over Japan.

Using a hot plate makes it easy to enjoy monjayaki, so consider trying it at home!