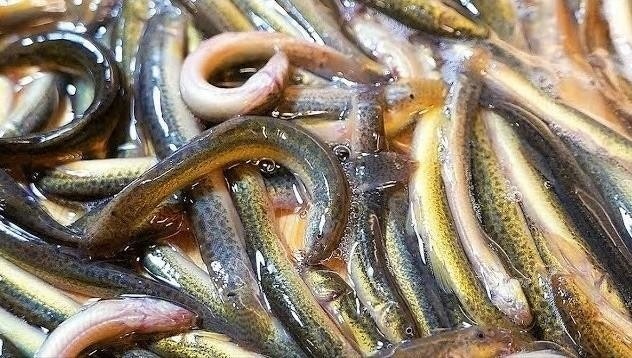 Dojo loach hot pot, which is famous as a traditional Japanese old-town dish, comes into season from spring to summer.
The area around Kaminari-mon Gate, in particular, is full of famous dojo-hot-pot restaurants and hot-pot pubs surrounding a sunken hearth with a downtown feel that is still very much alive today.

The Origin and History of Dojo Loach Hot Pot

When did people start eating dojo loach hot pot?
Dojo loach, an exceptionally resilient river fish, was an important source of protein for local residents, referred to as "Edokko" (江戸っ子), in the town of Edo (Current day Tokyo) thanks to its well-developed waterways.

There were many pilgrims around Sensoji Temple (浅草寺 Sensoji), the oldest temple in Tokyo, and the local people in Asakusa welcomed them with dojo loach dishes, using the dojo loach from the Sumida River (隅田川, Sumidagawa), formerly the Arakawa River (荒川, Arakawa).
This is said to be the origin of dojo loach hot pot. In 1806, dojo loach hot pot started to be written "どぜう" (typically pronounced dozeu) instead of its original name "どじょう" (Both are pronounced "dojo"). The origin of this change is said to be Echigoya Sukeshichi (越後谷助七), the founder of Komagata Dojo (駒形どぜう), one of the most popular restaurants in Asakusa.
When his restaurant burned down in the Great Fire of Edo, he thought a store name using four characters would bring ill fortune.
Because of this, instead of four characters, he spelled his store name with three characters. The number "4" is pronounced "shi" in Japanese, and traditionally it is also connected with the word “death” (死) in Japanese, which is pronounced the same.

The Menu and Recipe of Tatsumi-Ya

Dojo loach hot pot has three main cooking styles. Given the fact that it goes by 3 different names- dojo loach nabe, Edo-Nabe (江戸鍋), and Edomae-Nabe (江戸前鍋), we can tell that it was a very famous dish in the city of Edo.
The first cooking style is called "Maru-Nabe" (丸鍋).
This involves putting live dojo loach into a container of Japanese sake and covering it with a lid.
When the dojo loach stop kicking, they are placed on a round iron plate with lots of green onions and eaten with seasonings, such as Japanese pepper and Shichimi-Togarashi (七味唐辛子), a chili pepper spice.
In this video, you can watch the live dojo loach getting quieter and quieter in a container of Japanese sake around 1:53. Be sure to check it out!

The second style of recipe is called "Nuki-Nabe"(ぬき鍋); a hot pot dish similar to sukiyaki.
This method involves cutting the dojo loach open along the back, and cooking it with burdock roots.
The third and most popular style of dojo loach hot-pot is called "Yanagawa-Nabe" (柳川鍋). This involves dropping eggs in Nuki-Nabe and stewing everything together.
What these styles have in common is not just dojo loach; all of these methods involve stewing dojo loach with tofu and green onions.

In the introductory video of Tatsumi-Ya’s dojo loach dishes, the chef shows how to cook dojo loach hot pot. You can see this at 14:52.
You can also see people eating the cooked dojo loach hot pot with lots of chopped onions over fluffy eggs. It looks like it pairs nicely with white rice as well.
In addition to the hot pot dishes, another famous dish is dojo loach karaage.
This involves putting flour on live dojo loach and then deep-frying them. This can be seen at the beginning of the video.

Dojo loach dishes in Asakusa are a common theme in the summer, but you're probably wondering why people would want to eat hot dojo loach dishes in the warmest season of the year.
First, dojo loach is a stream fish, so it has a unique smell.
To get rid of the smell, chefs often cook dojo loach with burdock roots.
Since burdock roots are very hard, they must be stewed in a nabe pot to make them softer and easier to eat.
Another reason for this comes from a traditional Japanese trick for staying cool in summer.
After working up a sweat, the cool evening breeze allows us to cool our bodies.
Around 18:09 in the video, you can see a piping hot dojo loach hot pot dish.
Look at all the mouth watering goodness!

Dojo loach dishes have been very popular among local people since the Edo period.
This video shows how to cook dojo loach dishes by the chefs of Tatsumi-Ya in old-town Asakusa, Tokyo.
Dishes like this are eaten less often these days, but if you're looking to boost your stamina to survive the hot summer in Japan, then you've got to try the dojo loach dishes at the famous Japanese restaurant "Tatsumi-Ya" in Asakusa! It’s also fun to watch the chef's amazing knife skills.
Be sure to take a look at the video to see all the amazing dojo loach dishes!