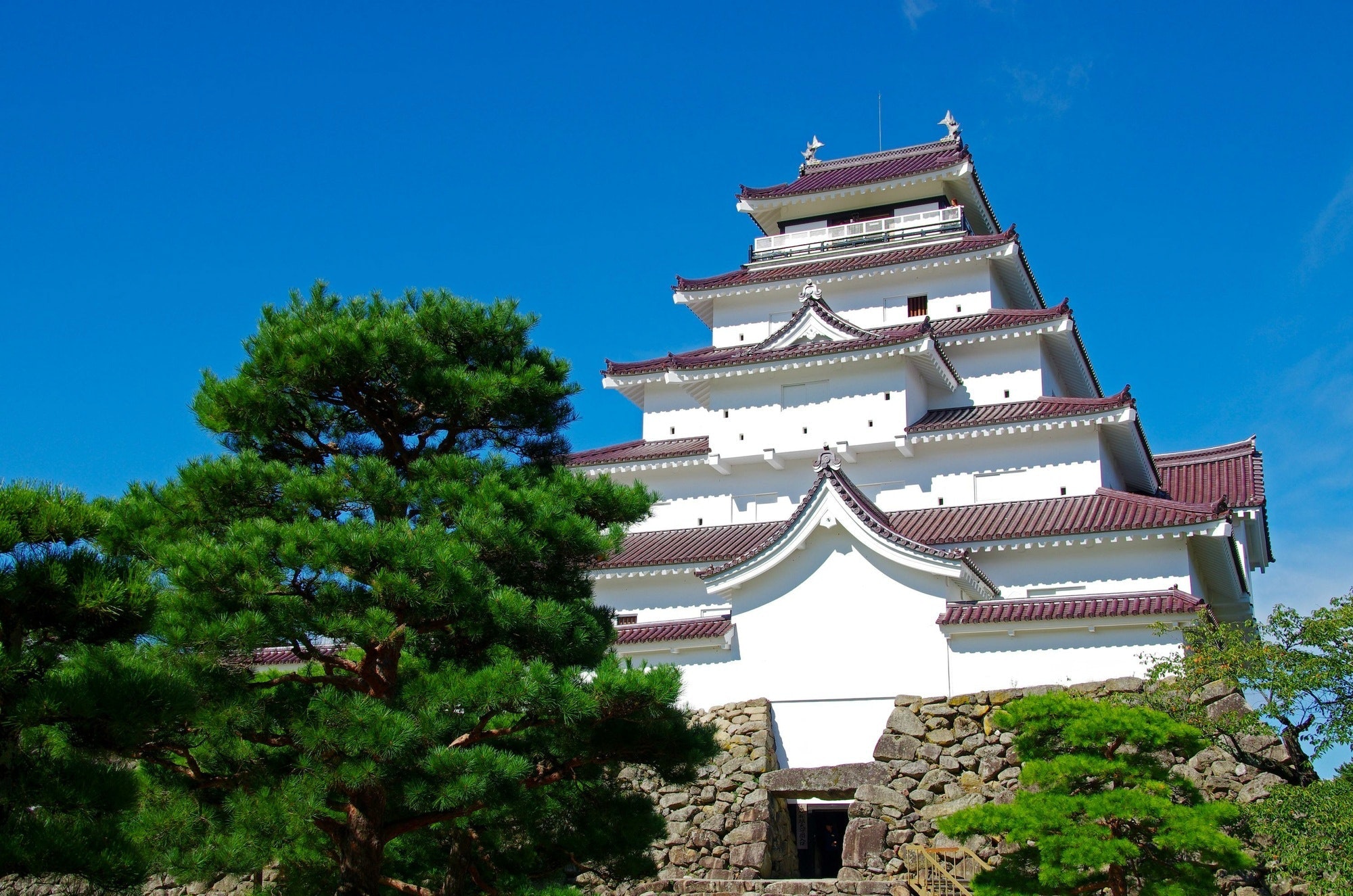 Aizuwakamatsu Castle, located in Otemachi, Aizuwakamatsu city, Fukuoka prefecture, is known locally by its other name, Tsuruga Castle.
Other than being chosen as one of the "Top 100 Castles of Japan," it was also chosen as one of "Japan's Top 100 Cherry Blossom Spots," due to there being approximately 1,000 cherry blossom trees in Tsuruga Castle Park, which was built on the castle ruins.
During the cherry blossom season, there are illumination events held here, and many tourists come to visit the castle.

Aizuwakamatsu Castle: The History of the Castle

Aizuwakamatsu Castle is said to have originated when Ashina Naomori built the Higashi Kurokawa Yakata in 1384.
At that time, it was known as Kurokawa Castle or Odakagi Castle; however, when Gamo Ujisato became castle lord, a castle tower was built, and it came to be known as Tsuruga Castle.

It is known as an impregnable castle due to withstanding the onslaught of the new government forces for a month, despite the tragedy of the Byakkotai during the Boshin war, following the rule of the Aizu clan.
In the 7th year of Meiji (1874), it was demolished leaving only the stone wall.
However, in the 40th year of Showa (1965), it was reconstructed, and in the 23rd year of the Heisei (2011), the thatch was replaced with red tiles as part of a restoration project, making it the only red-tile castle tower in Japan.
A shachi (mythical carp with the head of a lion and the body of a fish) is raised above the castle tower, and 2-carat diamonds are embedded in the center of its eyes.
It is also designated as a national historic site under the name of Wakamatsu Castle Ruins.

First up is the Kitademaru Otemon gate, which was built using large stones and can be seen at 0:20 in the video.
Next up is Tsubakisaka and the stone wall of Taikomon Gate.
The stairs which are built into the stone wall are called “Mushabashiri” and can be seen at 1:17 and 3:05 of the footage, are said to be built so that soldiers can intercept and engage enemies through quick asccess to the top of the wall.

From the castle tower, which can be seen at 2:01 in the video, you can enjoy a breathtaking view of the cityscape of Aizuwakamatsu.
The Tetsumon Gate, which can be seen from the castle tower, is shown at 2:09. The name Tetsumon comes from the surface being plated with iron (鉄, "Tetsu" is iron in Japanese).
Another highlight is the natural stone wall of Rokabashi Bridge.

At the beginning of the video, we are introduced to Aizuwakamatsu Station on the JR Banetsu West Line. To get to Aizuwakamatsu Castle, take the "Haikara-san" bus from Aizuwakamatsu station, get off at Tsuruga Castle Entrance, and from there, it's a 5 minute walk.
There's also a paid parking lot.

The castle tower is also an exhibition room for the Wakamatsu Castle Tower Historical Museum and the business hours are from 8:30 AM-5:00 PM; and there is an admission fee.
In the Tsuruga Castle inner citadel, there's Koujou no Tsukihi, and there's also a track and field arena, city pool, and the Fukushima Prefectural Museum at the San no Maru ruins.
It explains the history of Tsuruga Castle in a way that is easily understood.